Hamilton, Ground Level (Hilton Orlando Bonnet Creek)
R. J. Wainright, Y. Umasankar, and R. P. Ramasamy (The University of Georgia)
Oxygen reduction is one of the most widely studied reactions for electro-catalysis. There has been a lot of work on the development of novel catalyst materials and structures to replace or complement platinum nanoparticles for oxygen reduction electro-catalysis. Modification of catalyst structure, in both shape and size, on the nanometer scale, could be used to minimize both platinum mass and improve platinum utilization. There has been evidence in the literature suggesting that unsupported nanowires1,2, as well as those supported by carbon2,3,4, exhibit higher electrocatalytic activity than nanoparticles of platinum on carbon spheres. Platinum nanowires are unique in the respect that they combine the properties of both bulk and nanostructured platinum. In this work, we synthesized platinum nanowires on carbon black (PtNWs/C) using a procedure adapted and modified from the reported literature5. The synthesized PtNWs/C, as shown in Figure 1, were used to prepare catalyst ink with the addition of 25% Nafion. Rotating disc electrode studies were performed to investigate the electrocatalytic activity of the PtNWs/C for the oxygen reduction reaction. The PtNWs/C showed higher onset potential, smaller Tafel slope, and enhanced electro-kinetic activity compared to the commercially available 20% Pt-C (XC-72) catalyst.
Fig. 1: TEM image of platinum nanowires (~4 nm diameter and 50 nm length) on carbon black synthesized by a modified formic acid method. 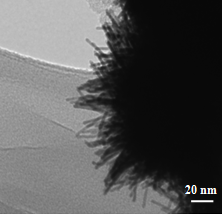