Floridian Ballroom F, Lobby Level (Hilton Orlando Bonnet Creek)
S. Ye, L. Yu, H. Liu, Y. Qiao, M. Osawa (Catalysis Research Center, Hokkaido University), N. Kuwata, and J. Kawamura (Institute of Multidisciplinary Research for Advanced Materials, Tohoku University, Japan)
To improve the performance of Li-ion batteries, it is important to understand the structures on the electrode/solution interface. In the present study, a surface sensitive nonlinear vibrational spectroscopic technique, sum frequency generation (SFG),1 was employed to evaluate the molecular structures of the solvent adsorption at the LiCoO2 cathode surface of the Li-ion battery, rather than those of the solvent in the bulk solution obtained by previous studies.

Figure 1a shows the sps-polarized SFG spectrum at the LiCoO2 contacting with EC (middle panel, circles) and the fitting result (solid trace) in the infrared frequency region between 1700 and 1850 cm−1. As SFG does not occur in a homogenous bulk solution with inversion symmetry, the present result suggests that the EC molecules align on the LiCoO2 surface with a certain structure. The bottom panels are deconvoluted bands for the SFG spectrum. The upward and downward peaks represent the modes with reversed orientations as the schematic model shown in inset. These modes optically interfere with nonresonant signal cNR(2) as well as themselves, generating constructive (upward) and destructive (downward) peaks depending on the adsorption geometry of the molecules. The top panel in Fig. 1a shows SFG spectrum after removing contribution from cNR(2). Based on the spectral analyses, two adsorption geometries of EC molecules on LiCoO2 surface have been observed by the present SFG measurement, by pointing the C=O groups away from or towards the electrode surface, respectively.

Solvent adsorption has also been investigated in the other solvent solvents or their mixtures. Figure 1b shows the SFG spectra of different carbonate solutions after removal of cNR(2).  It is found that the SFG spectra of the mixed solvents containing EC molecule are quite similar to that of EC solvent. This implies that the preferential adsorption of EC molecules on the LiCoO2 surface compared to the linear carbonates of DEC and DMC, with a largely different molecular proportion from that in the mixed solution bulk.3 The present results is expected be useful to understand the initial stage for the solid electrolyte interphase (SEI) formation on the cathode surface. 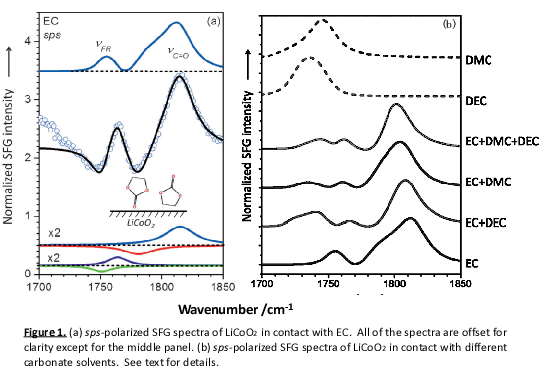