Floridian Ballroom F, Lobby Level (Hilton Orlando Bonnet Creek)
J. S. Spendelow and D. C. Papageorgopoulos (US Department of Energy)
Fuel cells have been used in niche applications for many years, but they only recently began to be competitive with incumbent power generating technologies in more widespread applications.  Since the invention of the modern PEMFC MEA around 20 years ago, significant investment in R&D by the public and private sectors has led to major improvements in fuel cell performance, with simultaneous reduction of precious metal content.  This time span has seen a shift in attention from the work on liquid fuel onboard reforming in the 1990s and early 2000s to a focus on the use of direct H2PEMFCs for transportation and other applications in the last decade.

Since the 1990s, published accounts of state of the art MEA performance demonstrate that power density under conditions that approximate the rated power operating point (0.6 – 0.7 V) has nearly doubled, while typical operating pressures have decreased by more than 50% and typical precious metal loadings have decreased by an order of magnitude (Figure 1).  Similar improvements are apparent at 0.8 V, which approximates the expected average voltage during a typical automotive drive cycle.

This improvement in performance under rated power and average power operating conditions has enabled fuel cells to more effectively compete with alternative technologies, such as batteries and combustion engines.  It has also enabled major cost reductions due to the decrease in the required PEMFC stack size and the decrease in the precious metal catalyst loading.

Figure 1. Power density at 0.7 V with operating pressures of 1-5 atm and PGM loadings of 0.12-8.0 mg/cm2.  The area of each data point is proportional to the PGM loading. 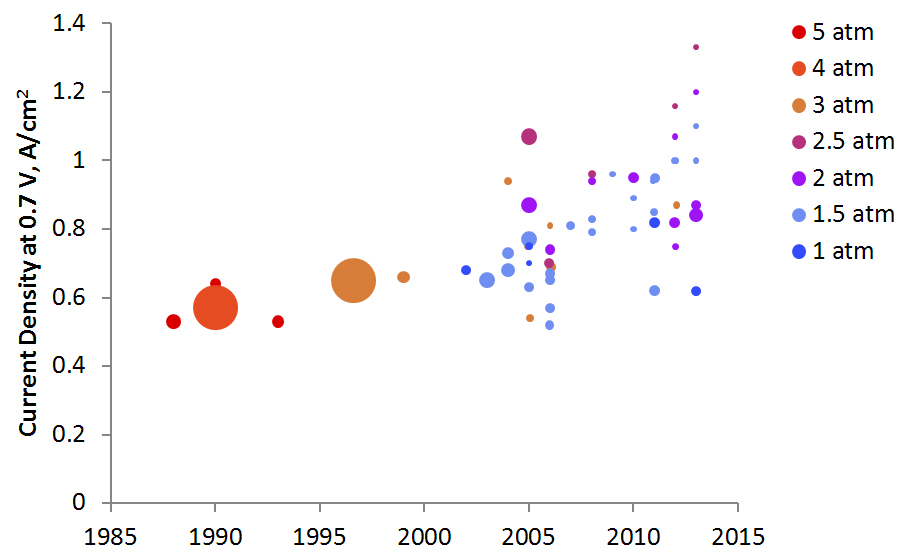