Bonnet Creek Ballroom V, Lobby Level (Hilton Orlando Bonnet Creek)
B. Yang and L. Hoober-Burkhardt (University of Southern California)
Organic redox flow batteries (ORFB) are considered to be one of the most promising technologies for large-scale energy storage needed for integrating renewable energyrom intermittent sources such as solar photovoltaic and wind-based generation systems [1]. ORFBs are attractive because the proposed materials are potentially low cost, eco-friendly, and sustainable. Organic compounds, such as quinones and their derivatives, can be used as both the positive and negative active material of ORFB, due to their electrochemical reversibility and relatively high charge capacity of 200-490 Ah/kg. The use of water as the solvent lowers the cost and makes the system safe, non-flammable, and highly eco-friendly. Heavy metals such as chromium, vanadium, zinc and lead are completely avoided.  Thus, the material cost can be reduced substantially for achieving the DOE-specified target of $100/kWh for the entire battery system.

In the present study, we have constructed redox flow cells operating on 0.2 M benzoquinone disulfonic acid (DSQ) and 0.2 M anthraquinone sulfonic acid (AQS).  We have measured the rechargeability and current-voltage characteristics.  We find that the cells are rechargeable and no loss of capacity was observed in 12 cycles (Figure 1). This result suggests that the quinones are chemically stable under the conditions of cycling.

The current-voltage curves were measured as a function of state-of-charge.  We found that the power density decreased significantly below the 50% state of charge.  This decrease is attributed to the mass transport limitations that can be severe at low reactant concentrations of 0.2 M (Figure 2).   Analysis of the current-voltage and impedance data indicate that the  power density can be increased by enhancing the solubility of the quinones, increasing the temperature of operation and by modifying the electrode structure to allow for rapid mass transport.   In this presentation, we will discuss the improvements in power density achieved by these various approaches.

The work presented here was funded by ARPA-E (Open FOA) and the Loker Hydrocarbon Institute of University of Southern California. 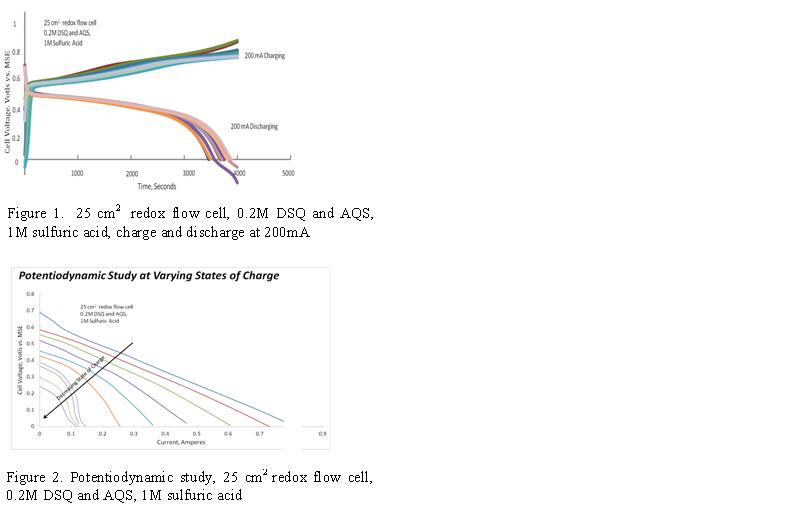