A facile one-pot solution-based reduction method was developed to synthesize the composite catalyst with Pd NPs decorated on MWNTs. Briefly, 100.0 mg MWNTs was dispersed with 50 mL xylene in a 100 mL beaker under ultra-sonication for 1 hour, after which the MWNTs/xylene mixture was transferred into a 250 mL 3-neck flask. Then, the solution was heated to reflux ( ~140 °C) after 20 min. At the meantime, 304.0 mg Pd(AcAc)2was dispersed with 20 mL xylene in a 50 mL beaker under magnetic stirring for 10 min, and the mixture was then transferred into the 3-neck flask. The whole solution was then kept refluxing for an additional 3 hours to complete the reaction. After that, the final solution was cooled down to room temperature naturally, filtered under vacuum and rinsed with ethanol and distilled water 3 times, respectively. The final product (black powders) was collected after vacuum drying at 50 °C for 24 hours.

In this work, Pd/MWNTs catalyst has been successfully prepared by a facile one-pot bottom-up method. The electrocatalytic activities of the Pd/MWNTs catalyst for methanol oxidation are evaluated by varying the concentration of methanol and alkaline and changing the temperature. The reaction of the adsorbed intermediate species with the adsorbed hydroxyl is found to be the rate-determining step and an optimum peak current can only be achieved by a balance between methanol and hydroxyl adsorbates coverage. A pronounced influence of temperature on the Pd/MWNTs is manifested, implying greater tolerance of the catalyst towards poisoning residues at high temperatures.

The financial supports from Seeded Research Enhanced Grant (REG) and College of Engineering at Lamar University are kindly acknowledged.

Figure 1. Cyclic voltammograms of the methanol oxidation reaction on the Pd/MWNTs electrode in solutions containing 3.0 M methanol with various KOH concentrations of (a) 0.2 M, (b) 0.5 M, and (c)1.0 M at a scan rate of 50 mV s-1at room temperature. Inset shows TEM image of the Pd/MWNTs. 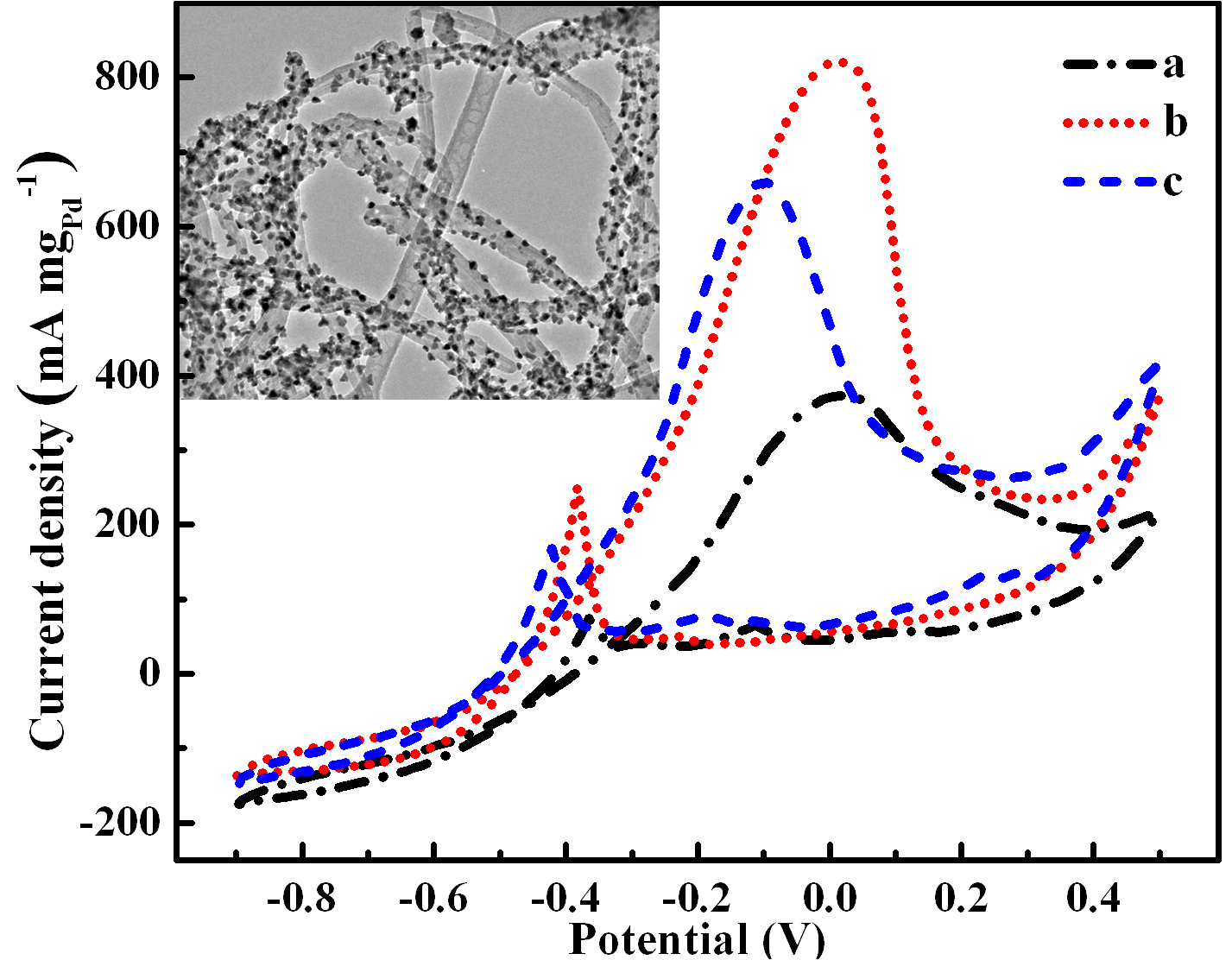