Introduction
Whereas there are numerous experimental and computational studies of electrochemical reduction leading to the formation of solidelectrolyte interface (SEI) in lithium-ion batteries, so far there have been no direct spectroscopic observations of radical intermediates involved in the SEI formation. Significant divergence of option as to the nature of SEI also exists in the literature despite the common agreement on the positive effects of SEI in prolonging the lithium ion battery cycling life. Moreover, numerous literature reports indicate that adding electrolyte additives to electrochemical cells can effectively modify the electrode surface layers composition and
stability, hence improving the cell performance, although the selection standard for those electrolyte additives are not very clear. Better understanding for the SEI formation chemistry is needed.

Experimental
Radiolysis and laser photoionization of carbonate electrolyte are used to generate radicals intermediates, which are observed and identified using electron paramagnetic resonance spectroscopy. New electrolyte additives based on the findings on the SEI formation chemistry are selected and tested in lithium ion battery.

Our study indicates that the previously suggested scenarios for electrolyte reduction require elaboration. In particular, we establish the occurrence of efficient H abstraction and 1,2-migration involving radicals generated through the reductive ring-opening. Instead of the primary radicals postulated in the current models, secondary and tertiary radicals are generated, biasing the subsequent chemistry to radical disproportionation. (Figure 1) The consequences of this bias for radical and anionic polymerization are examined, and it is suggested that branching and the formation of a polymer network is favored.(Figure 2) We argue that this chemistry accounts for some of the heretofore unexplained properties of SEI, including the dramatic difference in solvent permeability for SEIs derived from ethylene carbonate and propylene carbonate.

Based on the new chemistry we find on the effective SEI formation, we believe that a three dimensional cross-linked polymer is desired for more effectively electrode surface protection. We intentionally selected several electrolyte additives that can serve as the “hinge point” in SEI formation, hence can facilitate the formation of cross-linked polymers during cycling. To our delight, these additives do provide excellent cell cycling performance improvement. The detailed electrochemistry data will be presented. 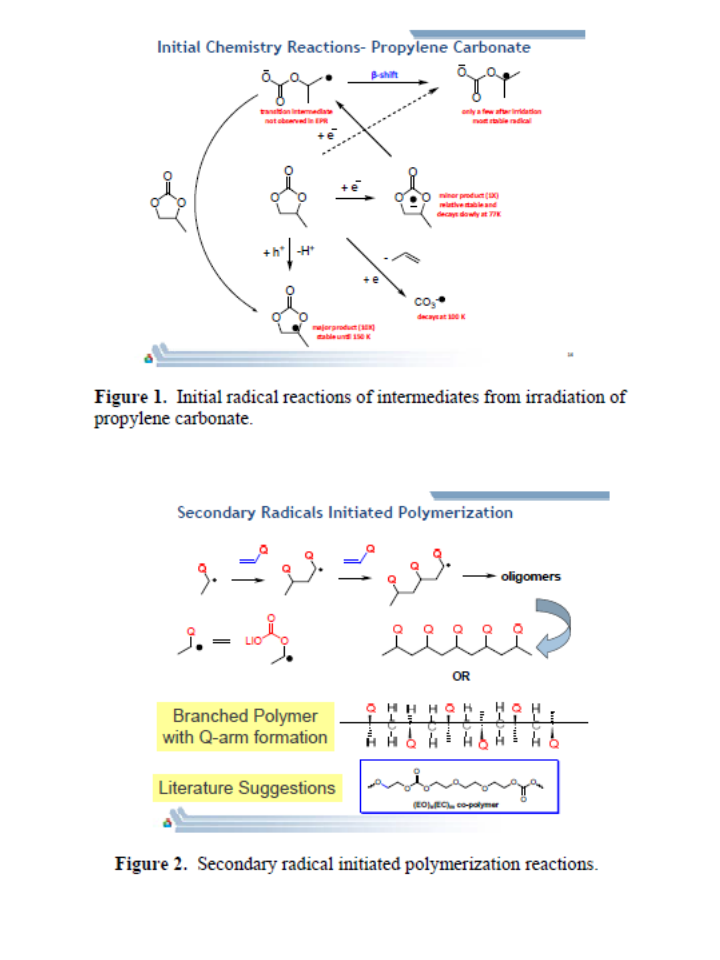