Photocatalytic decomposition of organic pollutants is one of the promising method for environmental purification. Most of the researchers focused on efficient decomposition of environmental organic contaminants under visible light irradiation or indoor fluorescent light.1 Oxide-supported metal catalysts are widely acknowledged as important catalysts that are related to versatile key in photochromism, chemical sensing and photocatalytic activity. Tungsten trioxide (WO3) acts as a ideal visible light photocatalyst owing to its small band gap energy (2.4-2.8 eV) and high oxidation power of vanlence band holes. But, WO3 exhibits low photocatalytic activity due its high recombination rate of photoexcited electrons and holes. In order to suppress the recombination of photoexcited carriers and significantly increase the photocatalytic efficiency, most research has focused to prepare WO3 doping constituent or WO3 composites.2,3 In the present study, we have synthesized PtPb/WO3 and PtAu/WO3 alloy catalysts, demonstrated to exhibit the efficiency for the decompostion of organic pollutants under visible light irradiation.

A simple one-pot synthesis approach to obtain WO3 supported PtAu catalyst is as follows. In the synthesis, 0.5 g of WO3 was suspended in 15 mL of anhyrous methanol for 15 min in a two neck round bottom flask. Pt (0.0075 g) and Au (0.0045 g) precursors were dissolved in 15 mL anhydrous methanol in the shielded vial uder Ar atmosphere and transferred to the suspensions. Then, the solution was stirred for 30 min to yield  homogeneous color soluion. Required amount of NaBH4 in mehtanol was injected into the suspensions. The product were washed and centrifuged with anhydrous methanol for three times and dried under vacuum. Similar procedure was followed to synthesis the PtPb/WO3 catalyst.

Figure 1 shows the TEM images of (a) Pt/WO3 (b) PtPb/WO3 and (c) PtAu/WO3 photocatalysts. Pt and PtPb and PtAu NPs are showed monodispersity and homogeneity on the WO3 supports. The average particle size of the three catalysts can be ranked as PtPb/WO3~PtAu/WO3 > Pt/WO3. The TEM results show that the addition of Pb and Au increases the size of NPs. Figure 2 depicts that the CO2 formation profile over different photocatalysts under visible light irradiation time. PtPb/WO3 photocatalyst (1 wt %) shows the higher rate of CO2formation over other photocatalysts. The details about the characterization and photocatalytic activity of catalysts would be discussed in the presentation. 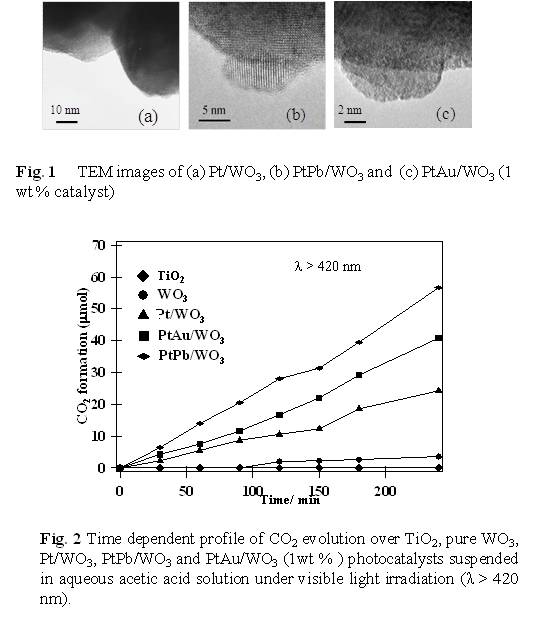