586
Metallization of Germanium by Electroplating Prior to Soldering

Nassau, Ground Level (Hilton Orlando Bonnet Creek)
Y. Çetin, I. Karakaya (Middle East Technical University), G. Demirci (Aselsan Inc.), M. Erdogan (Yildirim Beyazit University), and M. S. Aras (Middle East Technical University)
Elemental semiconductors; mainly silicon and germanium, are widely used in various technological fields such as optics, electronics and solar cells. For devices that work with IR (Infrared) radiation such as IR detectors, thermal and night vision cameras, germanium is the most widely used window material because of its high IR radiation transmittance. One of the problems regarding the use of semiconductors as part of an electronic device is their integration into the device and joining of the parts. The aim of this study is to provide a solution to germanium-metal joining problem by successively electroplating 3 mm wide nickel and gold frame on the outer edge of a circular germanium window.

Surface cleaning of parts to be joined or plated is very essential in order to remove contaminants from the surface and reduce oxides to the highest possible extent. Onsia and Conard [1], reported that wet chemical processes need to be developed to prepare germanium surface for subsequent growth processes. The wet chemical treatment for germanium surface preparation used in this study followed the reciepe originally proposed by Shiyu Sun et al [2]. Samples were first dipped into deionized water having a resistivity value of 18.6 MΩ cm, for 30 seconds to dissolve the native oxide. Then, they were placed into 10% H2O2 solution for 30 seconds to eliminate the carbon contaminations on the surface. Finally, the samples were immersed into a hydrofluoric acid solution for 10 minutes to remove the oxides. X-Ray Photoelectron Spectroscopy (XPS) results showed that more than 70% of oxides on the surface could be eliminated by the surface preparation treatment proposed above.

In this study, nickel was deposited at 55oC from the Watts solution, whose chemical composition is given in Table 1, because it is easy to control the bath and deposits have lower internal stresses. An important parameter in nickel plating is the applied current waveform: pulse or direct current. Chandrasaker and Pushpavanam [3] indicated that pulse plating methods produced less porous, finer grained and denser coatings when compared to direct current deposition of nickel. Another factor affecting the grain size and microstructure of Ni deposits is using additives like saccharin. SEM images of two different nickel deposits are shown in Figure 1. It can clearly be seen that addition of saccharin to the bath and using pulse plating technique decreased the grain size of the nickel plating and changed the morphology of the grains from pyramidal structure to colony like structure.

A thin layer of gold is required to protect the nickel surface from oxidation, which must be as pore free as possible to prevent the diffusion of oxygen to nickel or nickel to the surface. Gold was electrodeposited on the nickel coated germanium substrate from the acid cyanide bath (see Table 1) at 50oC by pulse and direct current plating in this study. Gold films obtained by pulse plating exhibited stronger adhesion to nickel surface and contained less porosity compared to DC plating. Homogeneous and bright yellow deposits were obtained at higher duty cycles.

Figure 1: SEM images of nickel plated surfaces by (a) DC plating and (b) pulse plating with saccharin addition. 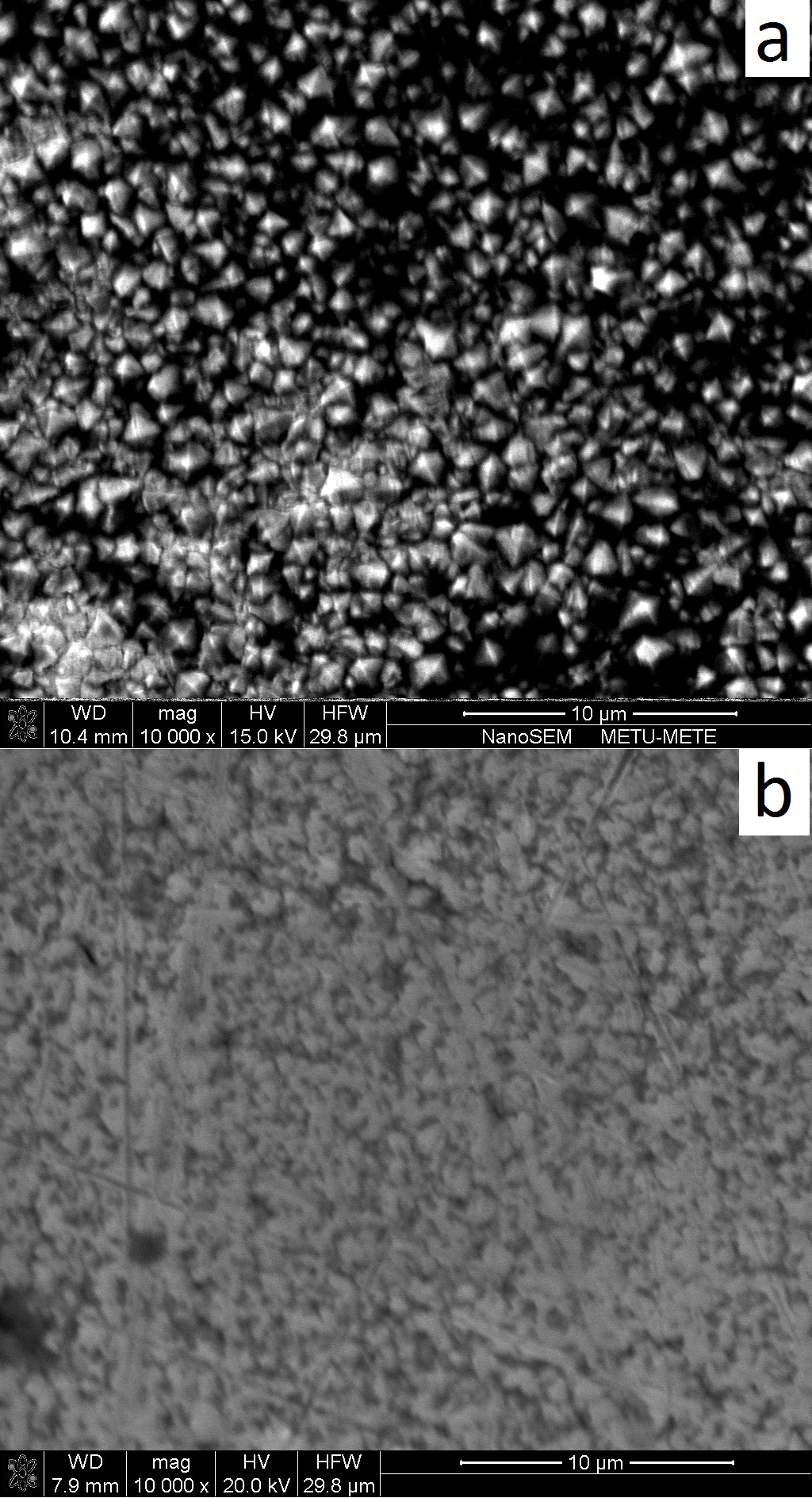