Grand Foyer, Lobby Level (Hilton Orlando Bonnet Creek)
D. J. Lee, H. D. Shin, S. K. Lee, J. W. Park (Hanyang University), M. Agostini (Rome University), J. Hassoun (Sapienza University of Rome), B. Scrosati (Italian Institute of Technology, Genova, Italy), and Y. K. Sun (Energy Engineering, Hanyang University, Seoul, Korea)
Recently, the lithium–sulfur battery is considered as a high-energy-density storage and power device for sustainable electric vehicles (EVs) due to its high theoretical energy density and natural abundanc.1 However, there are some drawbacks to introduce this battery into commercial devices. Some progress has been achieved on the electrolyte side, either by selecting systems more adequate than conventional carbonate solutions, such as 1,3 dioxolane (DOL), dimethyl ether (DME), and tetraethylene glycol dimethyl ether (TEGDME), or by the addition of soluble polysulfides.2–7 Recently, Tarascon and co-workers8demonstrated that the use of sulfur in contact with the lithium negative electrode may be beneficial for improving the life of lithium–sulfur cells. Progress has also been achieved on the electrode side, mainly by improving its morphology. These strategies have led to an optimization of the electrode morphology and to the development of lithium–sulfur battery prototypes with improved cycle life and rate capability.

However these progresses have not yet placed the lithium–sulfur battery at the level of real practical interest. In particular, the problem of the solubility of the polysulfides has not yet been completely solved. Herein, we show that this issue may be favorably addressed by following the approach originally reported by Tarascon and co-workers8 and Zhang and Read7; they achieved an improvement by replacing the additives Li2S5 and Li2S9, respectively, with the soluble Li2S8 polysulfide as well as by using a TEGDME4–LiCF3SO3solution.

The aim of this work was principally to use the electrochemical and physical effect of the polysulfide in buffering the dissolution of the sulfur cathode and only marginally its action as dissolved cathode.7, 8 Hence, we demonstrate that the added Li2S8 polysulfide provides a mass buffering effect, which is controlled by its concentration, according to Le Chatelier’s principle; this reduces the cathode dissolution during the cycling of the lithium–sulfur cell. In addition, the dissolved Li2S8 polysulfide is deposited on the cathode as sulfur on charging to compensate eventual capacity losses that result from partial cathode dissolution during discharge; this is due to an “electrochemical” buffering effect resulting from the fact that the added Li2S8 partially acts as a dissolved cathode, that is, as a “catholyte”.2–8

Fig. 1 illustrates the cyclic voltammograms of a carbon electrode in a lithium cell using the TEGDME–LiCF3SO3 electrolyte with addition of 5% w/w Li2S8. The CV response is typical of a medium in which a redox couple is dissolved [here, the Li2S8/Li2Sx (1<x<8) couple]. The voltammogram shows a first cycle that is characterized by low peak intensity (red curve) due to the initial Li2S8deposition–dissolution process that facilitates and enhances the same process in the following cycles (blue curves). 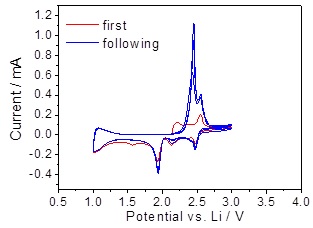