At the semiconductor/electrolyte interface, the multiple-reflection, attenuated-total-reflection (ATR) geometry has long proved to be the most useful experimental tool for maximizing the surface vibrational signals and minimizing the electrolyte absorption [1]. This advantage is gained without suffering from the mass-transport limitations inherent to the thin-electrolyte-layer spectroelectrochemical cells needed for external reflection geometry. Using polarized infrared beams in ATR geometry also allows for quantitative measurements to be performed and structural information to be extracted. When coupled to a modulation technique, dynamic information can also be accessed.

Many applications of the technique have been demonstrated, especially for the vibrational characterization of interface and double-layer species under electrochemical control (e.g., surface chemical changes, changes in the adsorption of neutral or ionic species, or changes in the ionic composition of the double layer as a function of the applied potential). Changes in the concentration of IR absorbing species outside the double layer but close to the surface can also be detected (e.g., measurement of the local pH). More specific information can be obtained on the semiconductor side such as changes in the electronic absorption (from electronic surface states or from free carriers) upon external stimuli or electrochemical insertion of specific species (e.g., semiconductor hydrogen loading under cathodic conditions). Finally, the technique has been proved very useful for the study of electrochemically grown thin films (e.g., for the detailed characterization of anodic films). Specific cells allow for performing such studies in aqueous or anhydrous solvents, and under potentiostatic or galvanostatic control, hydrodynamic control, temperature control, or illumination.

Therefore, in situ infrared spectroscopy appears as a unique technique to investigate electrode surface properties in lithium-ion batteries. Moreover, the advantages brought by using multiple-reflection, ATR geometry allow for overcoming the limitations encountered in the other in-situ IR studies of these systems. Silicon electrodes (which represent an impressive gain in energy density for negative electrodes in Li-ion batteries) have therefore been studied in a half-cell configuration against a lithium-metal electrode. The use of a thin-film geometry prevents electrode mechanical failure when films are thin enough and provides a well-controlled geometry allowing for the quantitative measurements of electrode evolutions, e.g., the formation of the solid-electrolyte interphase (SEI). Electrodes are thin films of hydrogenated amorphous Si deposited on a crystalline Si ATR prism, and experiments have been performed in 1M LiClO4 in PC or in 1M LiPF6in PC:EC:3DMC (2% VC, 10% FEC) electrolyte. As shown in Fig. 1, experimental spectra consist of positive peaks characteristic of the SEI film formed during the electrochemical process, and negative peaks due to electrolyte exclusion from the interface due to the SEI growth. The latter peaks can be used for quantitatively monitoring the film growth, which allows for determining the evolution of the SEI thickness during the first lithiation and after subsequent cycles (Fig. 2). A noticeable effect is the SEI growth and partial disappearance during the first lithiation/delithiation cycle. The experimental spectra can also be corrected for electrolyte absorption, which allows for isolating the SEI spectra and characterize its composition. In this way, Li solvation effects can also be evidenced close to the SEI. Additional information includes effects of lithiation on the bulk silicon thin-film, where the Si-H bonds, present in abundance in the a-Si:H network, are gradually and irreversibly consumed along silicon lithiation. Electronic absorption also evidences a distinct lithiation process in the first cycle (progressive invasion of a heavily lithiated phase from the silicon outer surface) as compared to subsequent cycles (quasi-homogeneous lithiation). 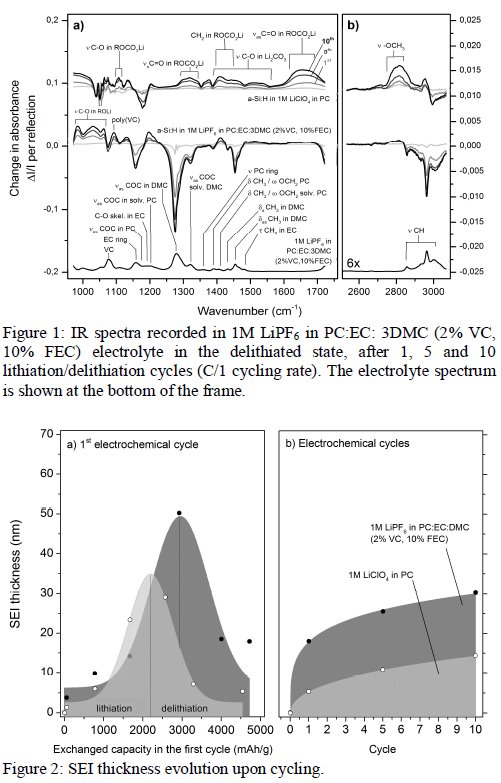