Floridian Ballroom G, Lobby Level (Hilton Orlando Bonnet Creek)
T. Tamaki (Chemical Resources Laboratory, Tokyo Institute of Technology), M. Mizoe, T. Sugiyama, and T. Yamaguchi (Tokyo Institute of Technology)
Enzymatic biofuel cells can use a variety of fuels such as glucose and ethanol, and they have the potential to power portable devices near the body. However, power densities of biofuel cells were very low because of their low current density. Recent advances in designing three-dimensional conducting electrode materials have resulted in superior performances of current density of over 10 mA cm–2 even without addition of mediators in solution, as summarized in ref[1]. Considering the high intrinsic activity of enzymes, the current density can be increased further to reach 102 mA cm–2, a value comparable with that observed in conventional direct methanol fuel cells.

We have proposed a high-surface-area three-dimensional biofuel cell electrode made of redox-polymer-grafted carbon to obtain high current density [2-4]. The rate-limiting step in mediated enzyme electrodes has been electron conduction via a redox polymer, which shuttles electrons from the enzyme to the electrode, due to the low apparent electron diffusion coefficient in the redox polymer [5]. In our electrode, the three-dimensional carbon electrode with high surface area and high electron conductivity plays the primary role in conducting electrons; thus, the electron conduction distance in the redox polymer was reduced, overcoming the rate-limiting step. Schematic illustration of this electrode is shown in Fig. 1. The effectiveness of the high-surface-area electrode was verified by experiments using the electrode as a glucose-oxidizing bioanode with glucose oxidase (GOx) [2,3], and a mathematical model [4]. The model calculation suggests that the rate-limiting step of apparent electron diffusion is overcome by using the proposed electrode even when the redox polymer has a low apparent electron diffusion coefficient, and an increase in the surface coverage of GOx allows an increase in the current density to the order of 102 mA/cm2. The reason of the low surface coverage of GOx in the experiments was then investigated, and shown to be mainly due to the deactivation of GOx upon adsorption on hydrophobic surface of carbon black [6]. Hence, to increase the current density to about 102 mA/cm2, the deactivation of enzymes upon physical adsorption on carbon black should be decreased.

In this work, we modified surface of carbon black by physically mixing carbon black with hydrophilic materials and by chemical treatment to retain GOx activity upon physical adsorption on carbon black. Hydrophilic materials used was polyethylene glycol (PEG) with hydrophobic end-group, diacylglycerol-PEG. Chemical treatment was acid-treatment using a mixed solution of nitric acid and sulfuric acid followed by graft-polymerization of poly(2-acrylamido-2-methylpropane sulfonic acid) (pAMPS). Surface-modified carbon black was then stirred in GOx solution to adsorb GOx, and the amount of the enzyme adsorbed on carbon black was evaluated using HPLC.

In summary, the surface treatment of carbon black to make hydrophilic surface is effective in reducing the physical adsorption of GOx, and thus has a possibility to realize high-power density biofuel cells by preventing deactivation of enzymes upon physical adsorption onto carbon. 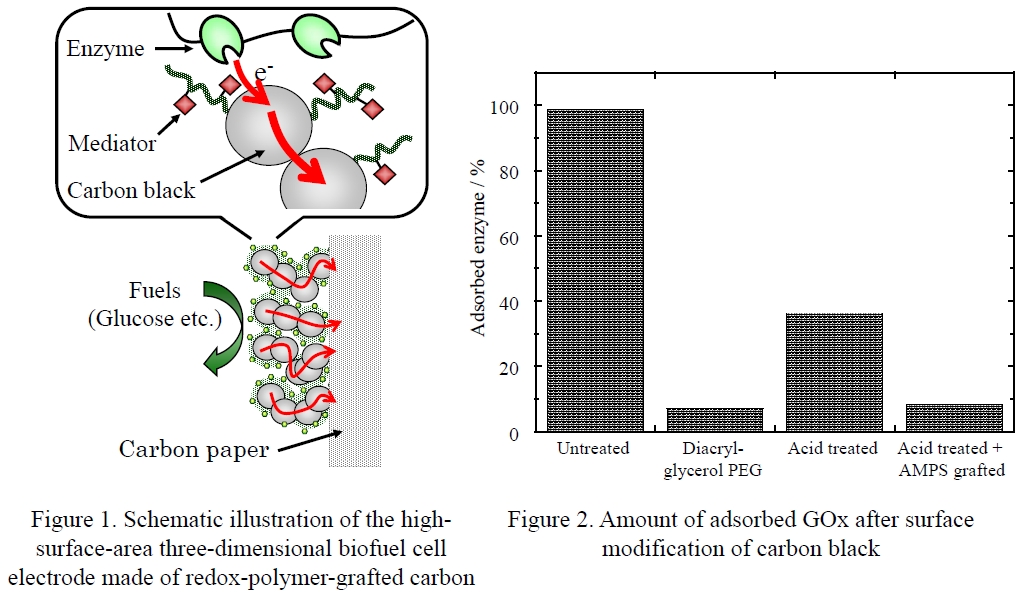