Previously, we electrochemically studied respiratory burst (rapid oxygen consumption) in response to a stimulant of THP-1 (cell line from a patient with myelocytic leukemia) 1). In this study, we compared the oxygen consumption during ordinary respiration and respiratory burst of THP-1 by fabricating a 3D THP-1 cell-culture chip, using SECM (Scanning Electrochemical Microscopy).

Fig. 1(A) is a schematic diagram of a pyramid well subjected to anisotropic etching on a silicon substrate. 1μL of a cell collagen suspension was inserted into this pyramid well. It was then placed in an incubator at 37°C under a CO2 concentration of 5 % for 10 minutes to gelate the collagen, forming a THP-1 cell culture chip.  The cell count was set at 4.5x103 cells /well.  Fig. 1 (B) is an optical micrograph of the 3D THP-1 cell chip.

Fig. 2 is a schematic diagram of measurement of cell chip respiration by SECM. For the measurements, the working electrode was a φ20 μm platinum electrode, the counter electrode and reference electrode was a silver-silver chloride electrode, and the measurement solutions were phosphate buffered saline (PBS) and 11.4 mM glucose, 10 mL, respectively.With the initial position of the working electrode from the silicon substrate at 20 μm in the Z direction, the potential was held at -0.5 V vs. Ag/AgCl. This electrode was moved back and forth in the Z direction 3 times from the vicinity of the cells up to 500 μm at a speed of 10 μm/s, and the change in the value of the oxygen reduction current was measured.

In fabricating the cell chip for respiratory burst measurement, phorbol 12-myrystate 13-acetate (PMA) was added to the THP-1 cells to a final concentration of 20 nM as a stimulant, and measurement was performed under the same conditions as those of Experiment 2-2 about 30 minutes later.

Fig. 3 shows the measurement results using a micro electrode moved back and forth in the Z direction 3 times, to determine the difference of oxygen reduction current at a distant position and in the vicinity of the cells by SECM. Fig.3 (A) is during ordinary respiration, and (B) is during respiratory burst. 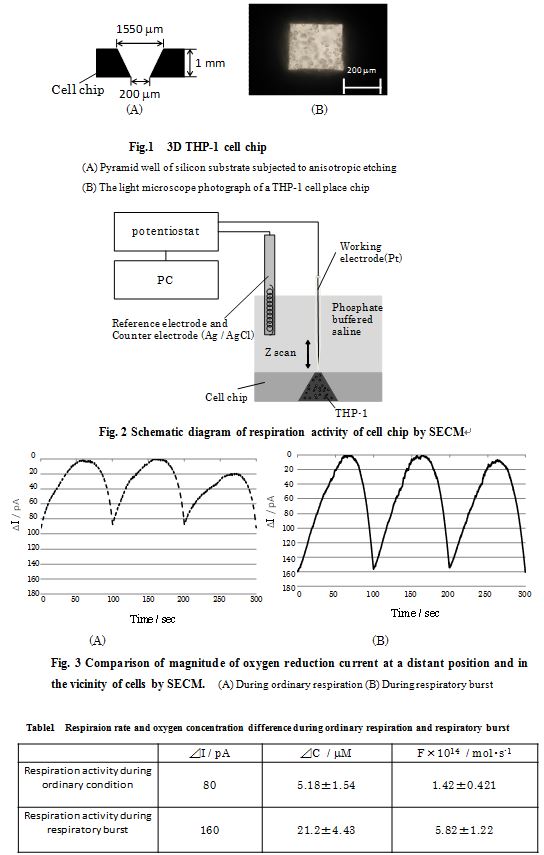