Bonnet Creek Ballroom I, Lobby Level (Hilton Orlando Bonnet Creek)
H. Srour (1) CEA-Liten, LMB lab 2) University of Lyon 1, CNRS-UMR 5265, C2P2; 3) University of Lyon 1, CNRS-UMR 5182, Ecole Normale Superieure de Lyon), E. Bolimowska (1) CEA Grenoble - DRT/LITEN/DEHT/SCGE/LGI; 2) University of Lyon 1, CNRS-UMR 5265, C2P2), H. Rouault (1) CEA Grenoble - DRT/LITEN/DEHT/SCGE/LGI), and C. C. Santini (University of Lyon 1)
Lithium-ion batteries are the technology of choice for cellular phones and numerous other portable applications, due to the higher energy density at low weight and volume, the longer cyclability and lower self-discharge compared to other rechargeable batteries [1]. The concern about energy sources in the near future has made lithium ion rechargeable battery development into growth area which gained high momentum for its research activities. However, one of the biggest barriers of industrial development is the safety concern, which is mainly owing to volatile and flammable organic solvents used in the electrolyte. Ionic liquids (ILs) have attracted a great deal of scientific attention during the last decade due to their often unique combination of physico-chemical properties [2,3]. In particular, their exceptionally low vapor pressure at ambient temperature makes them interesting substitutes for many applications for which volatility of traditional organic solvents causes problems [4-5].

Although there have been a lot of research studies concerning ionic liquids that use imidazolium-based cations (for example, synthesis solvent and catalysis), the problem of a stability limit up to the redox potential of lithium metal has been pointed out, and there have been very few to no reports on rechargeable batteries that use lithium metal or graphite as electrodes. In this research study, we examined the battery characteristics of Cgr/LFP electrodes using an imidazolium based ionic liquid, with an electron donating substituent at the second position of the imidazolium cation. We aimed to improve the reduction stability of imidazolium-based ILs and to realize a battery system that has both safety and high performance by the molecular design of the room temperature ILs.

In this work, we assembled and tested low-cost full cell configuration based on Cgr/LiFePO4 and containing ionic liquids (C1CnIm-NTf2 and C1C1CnIm-NTf2 / n=4, 6) based on bis(trifluoromethanesulfonyl)imide (NTf2-) anion as the electrolyte media at 60°C. The cycle performance, life, electrochemical stability of this cell is reported and compared with LTO/LFP technology, along with some post-test and electrochemical diagnostics of the components after cycling. According to the results, the effects of extending the alkyl chain were confirmed: the best electrochemical stability and charge-discharge performance is observed with modified ionic liquids and long alkyl chain (figure 1). It is worth to mention that lithium ion Cgr/LFP cells employing IL-electrolyte were realized and found to deliver a full discharge capacity. Even more important, we could accomplish the cycling at 60°C, which can’t be safely achieved with conventional organic solvent based electrolytes. 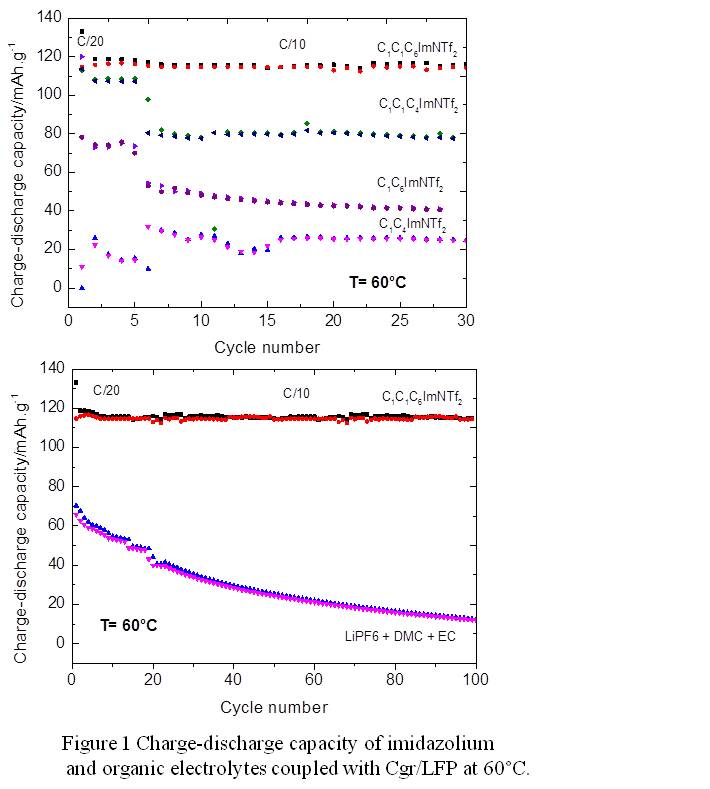