However, the formation mechanism of the hexagonal nanotubes is still being developed and none has been worked out a really quantitative form that would correctly yield numerical figures. According to a number of previous theoretical models, the formation of the pores is resulted from the competition of the oxidation (TiO2 membrane growth process: TiO2+6F-+4H+→TiF62-+2H2O) and dissolution (hollow nanotube formation process: Ti+2H2O/2OH-→TiO2+4H+/2H++4e). In order to get better understanding on these two simultaneous processes, the evolution of electrical field distributes on the working electrode are crucial factors for nanotube initialization and formation.

In this paper, self-ordered TiO2 nanotube arrays were fabricated by electrochemical anodization. A high-purity titanium foil (Purity of 99.7%, size of 20 mm × 10 mm × 0.5 mm) were used as anode after surface degreasing by acetone and ultra-sonication, and surface washing and drying with de-ionized water and nitrogen. The experimental set-up is shown in fig 1a. The anodic oxidation process was conducted at 50V for 4 hours in electrolytes with composition of NH4F (0.5 wt%)/ glycol/ H2O (3.0 vol%). A platinum wire (Purity 99.9%, diameter ~ 0.25mm and length ~ 20 mm) was used as cathode in this process. A representative SEM (Scanning Electron Microscope) image of TiO2 nanotube structure is shown Fig.1b. We further implemented this experimental data into COMSOL simulation to verify the effects of nano-sized structures on electrical field distribution.  The mathematical simulations were carried out with identical spacious geometry at micro and nano size level respectively. Fig. 2a shows the mathematical modeling of electrical distribution on assumed microtubes with diameter of 3 µm, length of 4 µm and gaps between tubes of 2 µm; Fig. 2b displays the simulated electrical distribution, which are fitted into the experimental data: 100nm in diameters (approximately) and 1µm in length, 50nm in gaps. Comparing the two mathematical simulations, it is concluded that the size of the structure plays a significant role on both the amplitude and the direction of the surface electrical field distribution.

In summary, formations of TiO2 nanottubes have been studied by electrochemical anodization.  Mathematical simulations have been performed at micro and nano scale for simulating possible electrical distribution on the TiO2 tubes.  The parameters of boundary condition are closely related to electrical distribution and can be distorted due to the dimensional effect between two neighboring structures. 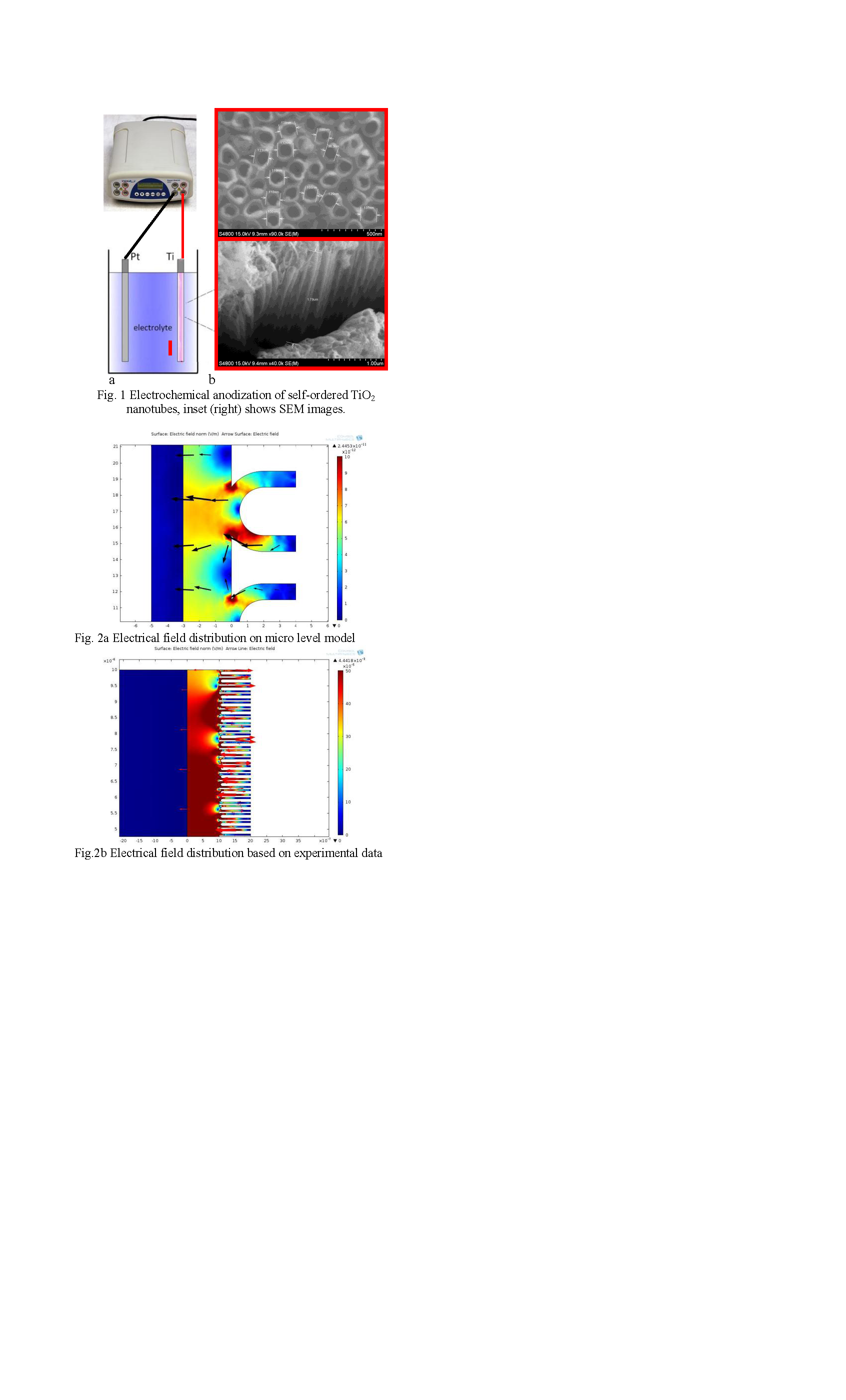