Floridian Ballroom G, Lobby Level (Hilton Orlando Bonnet Creek)
C. Santoro, S. Babanova, and P. Atanassov (University of New Mexico, Center for Emerging Energy Technologies)
Due to the high cost of wastewater treatment in traditional treatment plants, new technologies need to be applied in order to decrease substantially the operational cost mainly a result of the electricity used for pump air. Microbial fuel cells (MFCs) seems to be a promising alternative due to the ability of those systems to use bio-electrochemical reactions and purify the wastewater, reducing the organic load generating useful electricity. In order to be competitive for large scale applications, the cost of MFCs needs to be exponentially reduced and efficiency has to be dramatically increased.

A smart way to increase the performance of MFCs is to focus the research activities towards the optimization of the cathode since this electrode usually when mixed cultures are used is the limiting one. Nowadays, the most used cathode is based on the utilization of noble catalyst (e.g platinum), which determines at least 50% of the total cost of the system. Moreover, contrary to the PEMFC (hydrogen/air) where the reactants utilized are very “clean”, the electrolyte in MFCs contains significant number of pollutants that can poison severely the catalyst explored at the cathode. Different low cost catalysts for oxygen reduction reaction (e.g. activated carbon, carbon nanotubes, etc.) have been investigated demonstrating performances similar to the platinum in long terms operation. Unfortunately, all of these materials suffer of high activation and ohmic losses lowering severely the final MFCs output. In contrast, it has been showed that some enzymes (e.g. bilirubin oxidase, laccase, ect.) are able to catalyze oxygen reduction reaction (ORR), and have been used as cathodic bio-catalysts showing high open circuit potentials (OCP), very low overpotentials, and high activity, especially at neutral media that is usually the MFCs operational pH. The major problem with the utilization of enzymes is their denaturation and deactivation over time.

In this study, the trends of OCP, current density (at 0.3 V vs. Ag/AgCl) (Figure1) and the polarization behavior of bilirubin oxidase (BOx) based cathodes over a period of 45 days extensively were characterized. OCP, chronoamperometry measurements and polarization curves studies have been performed in a three-electrode setup using platinum mesh as a counter and Ag/AgCl (3M KCl) as reference electrodes.  The enzymatic BOx based cathodes (geometric area 2.25 cm2) were prepared as described previously [1]. The electrolyte used was phosphate buffer (PBS, 100 mM with 100 mM KCl) with or without the addition of activated sludge (AS, 40 ml). The AS was used as source of bacteria and contaminants in order to evaluate the enzymatic deactivation due to their presence. In order to protect the enzymatic electrodes from possible negative interaction with bacteria, a comparison between BOx based cathodes with and without silica encapsulation has been performed. The silica encapsulation provides a physical barrier to possible interference between bacteria and enzymes. To distinguish the effect of bacteria and contaminants, the electrolyte solution, containing AS and PBS, was autoclaved and utilized as electrolyte for the control test. The cathodes were poised at 0.3 V vs. Ag/AgCl for the investigated period. Every day, the OCP data were collected for one hour before a linear sweep voltammetry (LSV) was carried out.

The results showed that the initial OCPs were approximately 0.52 V vs. Ag/AgCl for all cathodes [2]. Over time, the OCPs decreased faster in presence of bacteria and contaminants or with the autoclaved solution i.e. presence of contaminants only.

The chronoamperometry measurement performed showed different trend (Figure 1). A clear distinction has been noticed between the tests performed with PBS as electrolyte and the rest of the studies. In absence of contaminants (PBS) an initial severe drop of current from 350 μA/cm2 to 180μA/cm2 after 3 days was observed after which the degradation of the enzymes continued with lower and constant slope (≈ 3.4μA/cm2 decrease per day). After 45 days the current produced was 40 μA/cm2. The addition of AS in the electrolyte led to lower initial current produced (250μA/cm2) and to more severe decrease in performance for the first 3 days (70 μA/cm2). Similar trends have been detected for both cathodes, encapsulated and non encapsulated, indicating unsuccessful protection of the enzymes with the preformed silica encapsulation.

The control test with autoclaved electrolyte, to discriminate bacteria and contaminants interactions with the enzymes (abiotic conditions), showed exactly the same trend as in presence of bacteria and contaminants in the electrolyte provided by AS. This result indicated that the presence of contaminants (mainly chlorine, sulfate, potassium, etc) enhanced dramatically the enzyme degradation and lowered the enzymatic activity. The presence and absence of bacteria instead did not show any difference in cathodes performance indicating a possible coexistence of enzyme and bacteria in one and the same environment. As a result the encapsulation procedure used didn`t show the necessity effect because the permeability of the silica gel matrix to the electrolyte and the dissolved contaminants in it.

Further studies should be carried out to identify the anions, cations and molecules that affect the performance and activity of the enzymes for possible and specific utilization in microbial fuel cells. 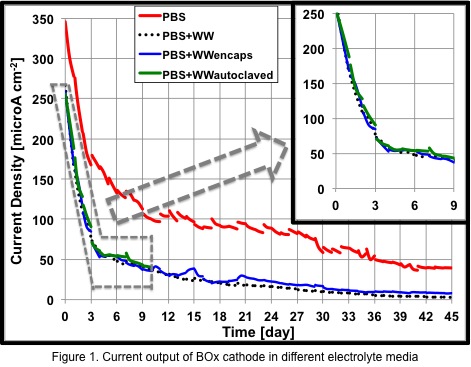