Floridian Ballroom J, Lobby Level (Hilton Orlando Bonnet Creek)
J. He (Department of Chemical and Biomolecular Engineering, University of Tennessee), V. Di Noto (University of Padova), and S. J. Paddison (Department of Chemical & Biomolecular Engineering, University of Tennessee, Knoxville, TN 37996)
Liquid methanol and water are examples of hydrogen-bonded systems which exhibit abnormal high proton conductivity.[1][2] Their mixture is of fundamental interest due to the rich and complex structure and topology of the hydrogen-bonded network in the solution. Previous studies suggest that the water-methanol mixtures exist in form of ice-like water cages surrounding the hydrophobic groups of the methanol molecules.[3] Recent experimental and theoretical studies proposed a new picture that, at low methanol concentrations, the mixture is consist of two separate percolating hydrogen-bonded networks.[4][5] Ab-Initio Molecular Dynamics (AIMD) simulations were performed using the VASP code[6] to understand the local hydrophobic structures in water-methanol mixtures, especially under the influence of electric field. Simulations of the water-methanol mixtures were performed at five concentrations: pure water, XM = 0.25 (20 H2O and 7 CH3OH molecules), XM = 0.50 (13 H2O and 14 CH3OH), XM = 0.75 (7 H2O and 20 CH3OH), and pure methanol in a supercell of length 12.22 Å. The finite electric field applied is between 0.25 and 0.75 V/Å.

The structure of pure methanol after applying electric field (E = 0.25 V/Å) along c-axis at 300 K is shown in Fig. 1 (a). It appears that most of the hydrogen-bonded network adopts motif structures, which is the predominant feature as predicted in the previous works. In the case of pure water (Fig. 1(b)), we see a different scenario. Under low electric field (E = 0.25 V/Å), the water molecules have evolved into separated cluster layers with hydrogen bond pointing outwards the empty space. With the electric field increased to E = 0.75 V/Å, a small amount of water molecules at the edges of two nearby cluster layers reach out to form a connecting cluster between the two layers. Also, there is no evidence of auto dissociation of the water molecules when subject to the electric fields being applied in this study.

Among the mixture structures, the mixture systems with concentration between XM = 0.25 and XM =  0.50 are of particular interest. The methanol and water are reported to form separate percolating hydrogen-bonded networks in the XM range of [0.25, 0.50].5 Instead, our results of XM = 0.25 mixture system shows that, before applying electric field, the structure of water in the mixture are still close to that of pure liquid water. There is evidence of the formation of water clusters, and the methanol molecules are randomly distributed in the water clusters. However, when a weak electric field (E = 0.25 V/Å) is applied, the methyl groups are aligned and form hollow channels inside the water clusters. (Fig. 1(c)) This local hydrophobic structure provides driving force for fast proton transport via structural or Grotthuss-type diffusion in the water-methanol mixtures.

In the XM = 0.50 mixture, the resulted structures before and after applying the electric field show similar features of random mixing between the methanol and water molecules. (Fig. 1(d)) There is no evidence of separate hydrogen-bonded water and methanol networks.

In summary, from a molecular level, our AIMD simulations illustrate interesting features of a local hydrophobic structure in water-methanol mixtures when under an electric field. With the absence of ice-like water structure, the water molecules tend to present in the form of pure liquid water and form clusters. With a low electric field, the hydrophobic groups of the methanol molecules align themselves and form channels inside the water clusters. The abnormal high proton conductivity can be explained by this type of local structure based on a structural or Grotthuss-type diffusion mechanism. 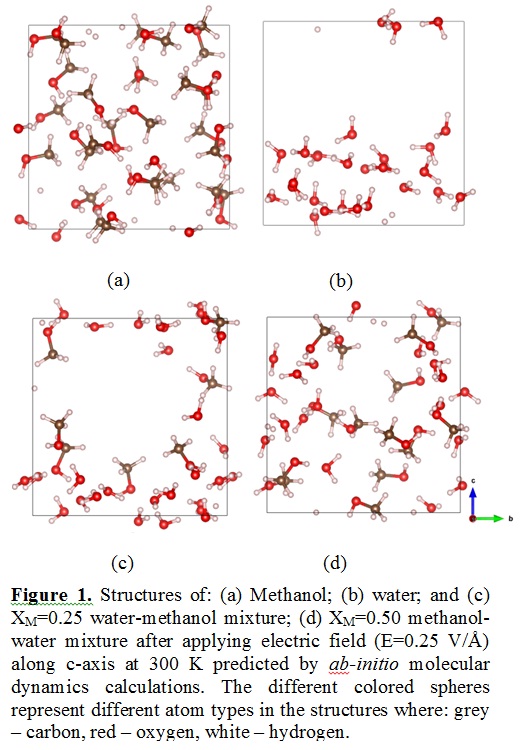 The authors gratefully acknowledge the support by the U.S. Army Research Office under Contract No. W911NF-07-1-0085.