“Smart materials” or stimuli-responsive materials are those with properties responding in a desired manner to an external stimulus or environmental change. While several classes of responsive materials exist, soft materials, particularly synthetic polymers, represent an opportunity to design systems with unique functionality to achieve a wide variety of chemical and physical properties. Here we present two systems utilizing thermally-responsive polymers capable of reducing lithium conductivity or lithium charge transfer ability in non-aqueous electrolytes with increasing temperature. These proposed systems would create self-limiting lithium reactions within a battery should the temperature increase beyond a target, thus inhibiting thermal runaway.

Li-ion systems utilizing polymer gel electrolytes are commercially available and ionic liquids (IL) have gained attention as potential replacements for traditional electrolytes (low volatility, non-flammability, high conductivity, and a wide potential window). Poly(ethylene oxide) (PEO) gels have long been combined with lithium salts to create polymeric electrolytes, which while safe, possess diminished conductivity. These PEO systems have recently been combined with ILs to boost performance while retaining the safety and mechanical stability of conventional polymer gel electrolytes.  In our first proposed system, we combine current research efforts utilizing polymer gel electrolytes and ILs, both of which provide improved thermal stability, while making use of the recently discovered lower critical solution temperature (LCST) between PEO and certain ILs, to modulate electrolyte conductivity with temperature [1,2]. We design the polymer electrolyte to decrease conductivity during a phase transition at elevated temperatures. As the temperature cools, the initial conductivity is reversibly restored as the electrolyte returns to its initial state. Additionally, we show how the PEO/IL composition and the addition of lithium salts affect both the magnitude of change in conductivity and the LCST in these thermally-responsive polymer electrolyte systems.

In our second proposed system, we utilize similar LCST phase behavior in IL systems by modifying electrode surfaces with responsive polymer brushes consisting of poly(methacrylates) [3-5]. Electrode surfaces were modified using the grafting from approach so that the polymer collapses on the surface of the electrode during a phase transition at elevated temperatures. In this collapsed form, the electrode surface is coated with an electrically and ionically insulating layer that prevents double layer formation in supercapacitors and charge transfer (or redox behavior) in Faradaic systems.  As in the previous system, the initial electrochemical activity is reversibly restored as the temperature cools and the responsive brushes return to their solvated state. 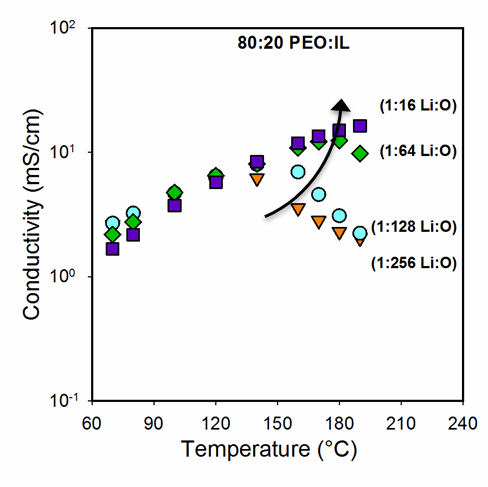