In this contribution, the solid-gas electrochemistry at both electrode/electrolyte interfaces of a standard ASC was significantly improved by modifications using nanotechnology:

Anode-supported half cells were manufactured by Forschungszentrum Jülich. They consist of a regular anode support (thickness 0.5 mm, NiO/8YSZ), with a µm-scaled anode functional layer (AFL, thickness 7 µm, NiO/8YSZ) and an ultra-thin-film electrolyte (thickness 1.5 µm, 8YSZ). Onto this electrolyte, a dense CGO layer (thickness 850 nm) was deposited by physical vapor deposition (PVD) to prevent secondary phase formation. At IWE, the nano- scaled LSC thin-film cathode (thickness 200 nm) was deposited by spin-coating of a metal-organic solution on top. This required a modified fabrication route, including anode reduction at 800 °C prior to cathode deposition and two consecutive heat treatments (170 °C and 650 °C) of the LSC thin film. Subsequently, the cathode was completed by screen printing a µm-scaled LSC current collector on top. The nano-scaled anode/electrolyte interface was evolved from a reverse current treatment during cell operation at 600 °C (~1% H2O in H2).

The nanostructures and phase compositions of both electrode/electrolyte interfaces were studied by high-resolution and scanning electron microscopy methods, among others. MOD derived LSC thin-film cathodes typically consist of a heterointerface made of the perowskite La0.6Sr0.4CoO3-δ and the Ruddlesden-Popper type phase (La,Sr)2CoO4±δ , which, in combination with the nanoscaled microstructure, leads to an extremely enhanced oxygen surface exchange [2]. The Ni/YSZ anode had undergone a complete rearrangement in the close vicinity to the electrolyte, resulting in an enormous increase of triple phase boundaries on the nanoscale [3]. A reaction model explaining the solid-solid transformations during the reverse current treatment, which was set up in model experiments, is presented. Analysis by electrochemical impedance spectroscopy (EIS) and current/voltage (C/V) curves revealed an area specific resistance (ASR) of 359 mΩ∙cm² at 600 °C and 60% H2O in H2and a power density of 900 mW/cm² at 700 mV in dry hydrogen atmosphere. This performance is by 400% better than measured for a standard-type ASC with a LSCF cathode, which underlines the potential of introducing nanotechnology for mixed conducting electrodes in SOFC.

This study has created a better understanding, how custom-tailored nanostructures potentially support the performance of mixed-conducting electrodes for SOFC at ≤ 600 °C. Despite alternative approaches reported in literature [5, 6], quite simple nanotechnology strategies were applied, which are also applicable on the larger scale, so that we see great potential in this “nano” ASC design. 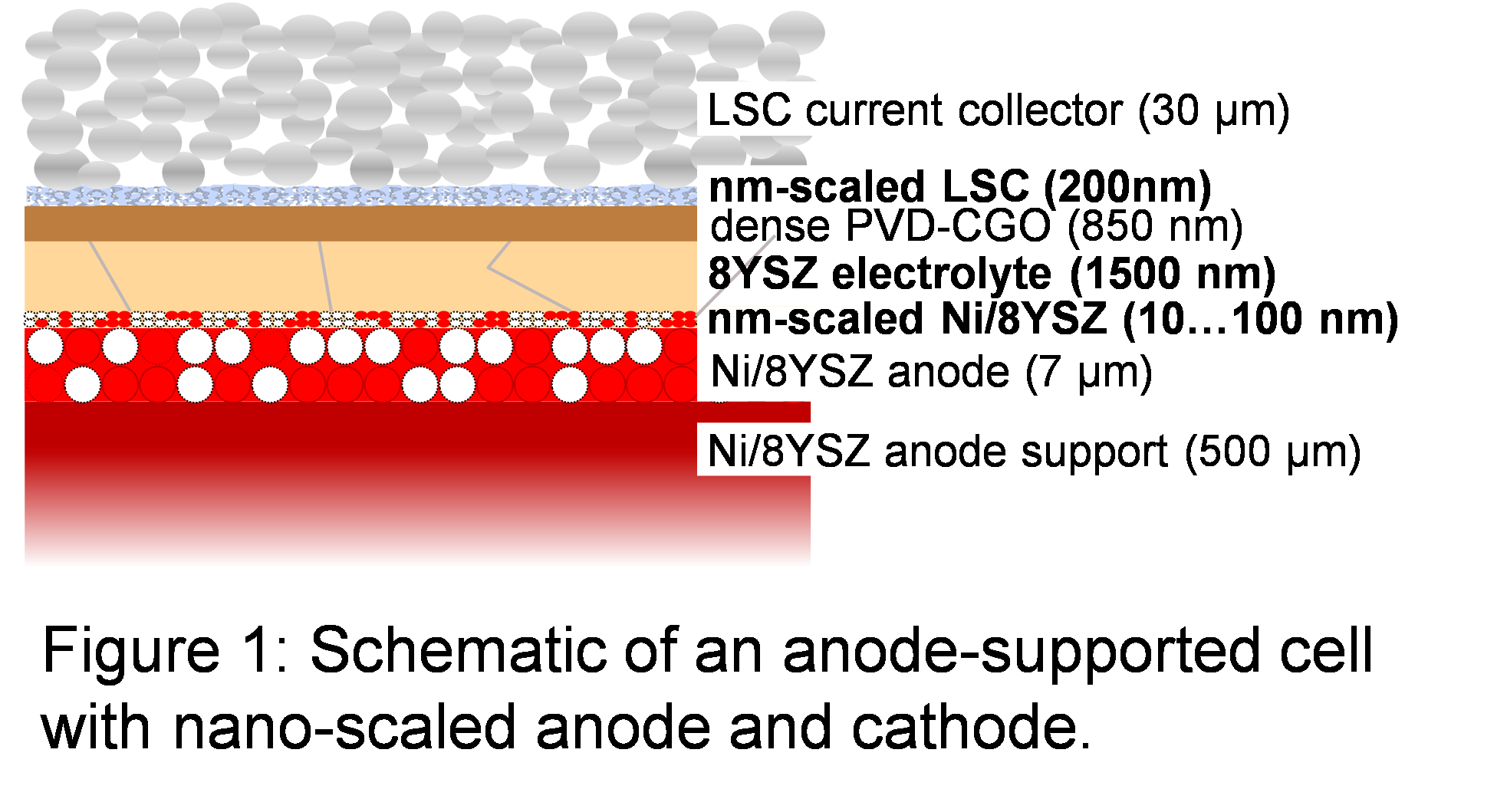