The present energy demand and consumption of fossil fuels have prompted the development of renewable energy sources. Among these, the photovoltaic devices are emerging as a real alternative to the use of sunlight. In recent years, silicon technology has been gradually replaced by second generation devices based on thin films of semiconductor materials. In this context, the semiconductors films based on iron and sulfur (FexSy) appear as interesting materials for a large number of applications. However, its electrochemical synthesis and characterization as semiconductor material have not been extensively studied. The properties of iron sulphide compounds can be controlled through changes in the stoichiometry, which makes them very flexible in technological applications. The width of its band gap makes iron disulphide (pyrite, FeS2) semiconductor suitable for applications in solar cells [l], whereas iron monosulphide (pyrrhotite, FeS) is an interesting material that can be employed in lithium batteries [2]. Photoeffects at the polycrystalline pyrrhotite-electrolyte interface have also been investigated [3]. This material was shown to be photoactive, with the onset of absorption in the nearinfrared range. Iron and sulphur show a strong tendency to form nonstoichiometric sulphides; among these, pyrrhotite occurs the most frequently, with chemical formula Fe0.9S. This compound is a semiconducting material with a calculated 0.2 eV energy gap [4]. At present the technological interest in this material is focused especially on lithium batteries. In fact, iron sulphide can supply higher energy density at lower cost compared with other metal sulphides [5]. Specifically, among the iron sulphides, compounds with a S/Fe ratio of 1.1/l give the highest electrochemical capacity when used as the cathode in nonaqueous lithium batteries [6]. On the other hand, the pyrite has attracted attention in recent years. This nontoxic semiconductor material has interesting properties: i) direct band gap of 0.95 eV comparable with silicon, ii) can be present the n-type or p-type semiconducting characteristic according to the synthesis method employed [1], iii) has a cubic structure and iv) a high coefficient of absorption of sunlight (a > 105 cm–1)[7]. Despite the above, no systematic studies literature for electrochemically obtaining this material and, in general, aqueous systems studied only lead to the formation of FeS which requires a vacuum sulfurization process for forming of FeS2. Furthermore, the synthesis of this material presents complications due to the formation of undesirable phases which lower quantum efficiency [8].

The present work shows initial results on the electrodeposition and subsequent characterization of FeS and FeS2phases obtained from an organic solution. For initial studies the DEG and DMSO solvent were

compared. A conventional three-electrode electrochemical cell was used for all electrochemical studies. Glassy carbon (GC) and TCO were used as working electrodes, an Ag/AgClsat was employed as reference electrode and a platinum wire of high surface area was employ as auxiliary electrode. Independent the organic solvent, the electrolyte solution was optimized: 1 mM FeCl2 x 4H2O and 0.5 mM elemental S8. The best results were obtained employing 0.65M of LiCl as supporting electrolyte. High chloride ion concentration promotes the formation FeClx(2-x)– ion complex that allowing the sulfur reduction without the formation of metallic iron onto the electrode surface. Volumetric analysis of precursors separately and together shows a significant synergistic effect amending potentiodynamic response when both are together. Although the above two processes sulfur reduction can be observed. These correspond to couples S8/S82– and S82–/S42– (see Fig. 1). Based on the collected information, the phases were potentiostatically obtained applying a constant electrodeposition potential of –0.45V. After the process, deposits were gray, dark and adherents onto the TCO electrode. XRD patterns obtained show that employing DMSO, only FeS phase is obtained independent of the concentration ranges used for the precursors. Furthermore, the mixture between FeS and FeS2 can be obtained when DEG it’s employing as organic solution. The characterization as a semiconductor material shows an adequate fit with those reported in the literature for both phases. 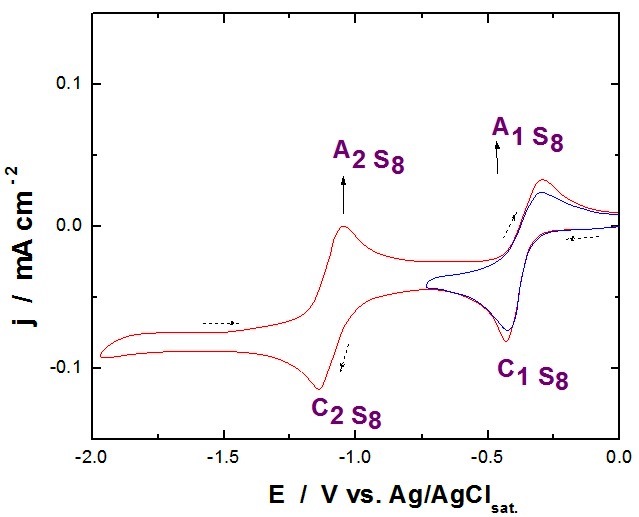