Grand Foyer, Lobby Level (Hilton Orlando Bonnet Creek)
F. Sepehr (Department of Chemical and Biomolecular Engineering, University of Tennessee, Knoxville, TN, 37996, USA), F. Bertasi (Department of Chemical Sciences - University of Padova), V. Di Noto (University of Padova), and S. J. Paddison (Department of Chemical and Biomolecular Engineering, University of Tennessee, Knoxville, TN, 37996, USA)
Ionic liquids (ILs) are liquid salts at room temperature having unusual properties as liquids. The most important properties of these electrolyte solutions are non-volatility and high ion conductivity which makes them a safe and advance choice for electrolyte solutions in energy devices. In general, ILs as the name implies, are comprised entirely of ions, usually organic cations and bulky anions. ILs are stable enough for ordinary use at temperatures of 200 to 300 ˚C. However, due to having organic cations their degradation begins at the weakest covalent bond. The chemical structure of ions can be tailored easily for the intended application [1]. The structure and properties of these Coulomb systems are mainly determined by the type and strength of the intermolecular interactions between anions and cations. In particular, the subtle balance between Coulomb forces, hydrogen bonds (HBs) and dispersion forces is of great importance for understanding ILs [2].

Having these superior properties, ILs can be used as a good carrier for ion transport in batteries. Recently, imidazolium based ILs with δ-MgCl2 ions have been under investigations as new electrolytes for Mg-based batteries [3]. These batteries show advantages over other competing types owing to the abundant source of Mg in the earth’s crust, better disposal and waste management. In addition, they have wide operation temperature range and their capacity loss over time is little.

The aim of this work is to use the results of first principles electronic structure calculations to study the structure of the new imidazolium based ILs with dissolved δ-MgCl2. Although, there have been many studies on the imidazolium based ILs, but there is still a debate on whether the hydrogen bonding is responsible for the red shifted C–H stretching frequencies and downfield shifted C–H proton chemical shifts or not [2]. Therefore, further studies on the structure and interactions of imidazolium based ILs especially in presence of δ-(MgCl2) are essential and helpful in optimal design of this new genre of electrolytes.

Differential scanning calorimetry on electrolytes composed of different amount of δ-MgCl2 dissolved in a homogeneous mixture of aluminum tri-chloride and 1-ethyl-3-methylimidazolium chloride (EMImCl) ionic liquid has been done. The results show that by varying δ-MgCl2 concentration at least two types of Mg complex depending on δ-MgCl2 concentration are formed. The IR spectrums show new peaks in the far infrared region by increasing the concentration of δ-MgCl2 indicating the formation of new bimetallic complexes. Also, Experimental IR investigations on EMImBF4/[δ-(MgCl2)n]f indicate that by increasing f which is the concentration of δ-(MgCl2), the Clˉ interaction band at 3050 cm-1, typical of the hydrogen bonding network in EMImCl appears in the difference spectra. The comparison between the profiles of pristine IL and EMImBF4/[δ-(MgCl2)n]f show that Mg forms different complexes with BF4ˉ anion. However, these new complexes are not known.

Electronic structure calculations were undertaken on the ethyl-methyl imidazolium cation in proximity to a number of different anions (Clˉ, AlCl4ˉ, BF4ˉ) using Hatree-Fock (HF), post HF, DFT, and Hybrid methods with different basis sets. The calculations were performed using Gaussian 09 suite of program [4]. Geometry optimizations were followed by frequency calculations to confirm the presence of each local minimum. Different initial structures have been searched for each system to determine the global minimum. Then the calculated IR spectrums are compared to the experimental spectrums and the least expensive method which is capable of describing the experimental spectrum is chosen for further calculations. Next calculations are performed on larger clusters of cations and anions which contains MgCl2. The IR spectrums are compared to experimental spectrums and the assignments of vibrational modes are done by visualizing the vibrational frequencies of the calculated structures. 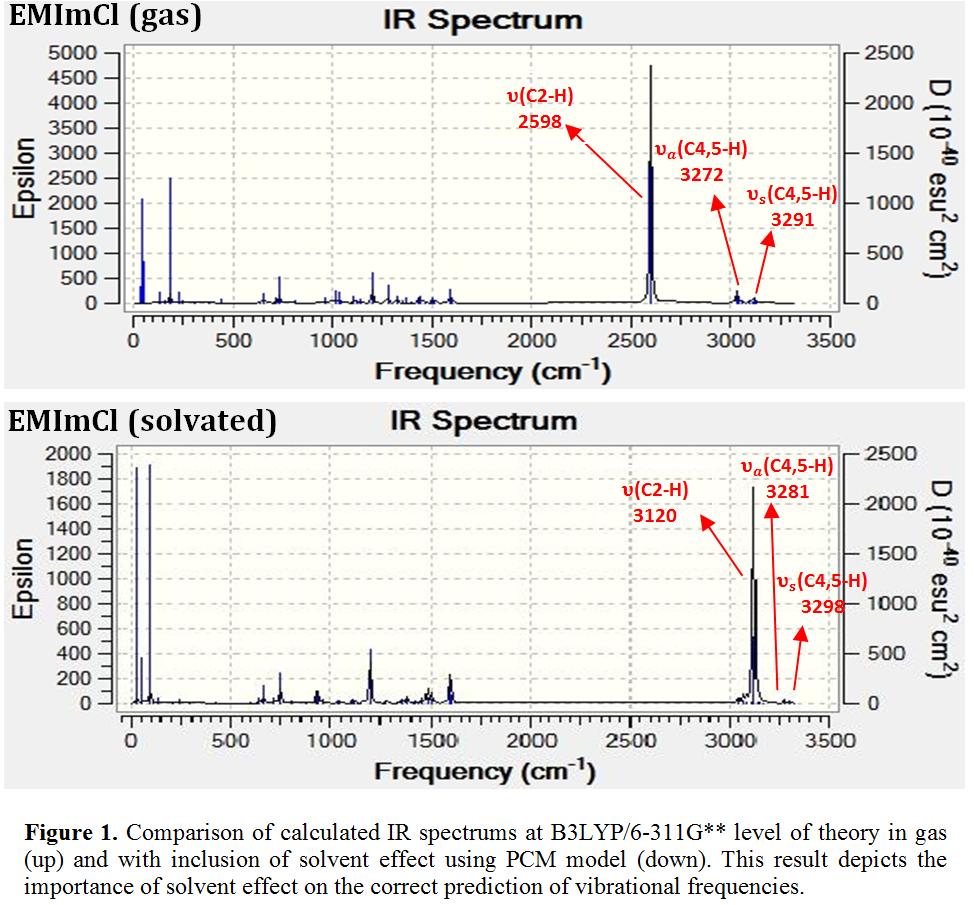