Bonnet Creek Ballroom IX, Lobby Level (Hilton Orlando Bonnet Creek)
A. M. Al-Enizi, A. A. El-Zatahry (King Saud University), A. M. Abdullah (Qatar University, Chemistry Department, Faculty of Science, Cairo University), and S. S. Al-Deyab (King Saud University)
The electrospinning of polyvinyl polyvinylpyrrolidone (PVP) with a polyaniline (PANI) and graphene sol mixture produced uniform, smooth fibers. These electrospun fibers were stabilized for 2 h at 200 °C and then carbonized at 800 °C for 5 h. Composites were prepared by depositing Ni(OH)2 on the carbon nanofibers (CNFs) and calcining them at different temperatures. The composites were characterized with X-ray diffraction (XRD), transmission electron microscopy (TEM) and scanning electron microscopy (SEM). The effect of the calcination temperatures on the electrochemical catalytic properties towards methanol oxidation was studied using cyclic voltammetry and electrochemical impedance spectroscopy. The optimum calcination temperature for the CNF/NiO composite that yielded highest oxidation peak currents for the MeOH oxidation reaction was found to be 500 oC. The analysis of the chronoamperometry measurements confirmed a significant increase in the real surface area for the CNF/NiO composite as the calcination temperature increases. The real surface area is increased at calcination temperatures of 400 and 500 oC more than 20 times higher than that calcined at 300 oC. This explains the higher electrocatalytic properties for the CNF/NiO composite as the calcined temperatures increases. The oxidation of MeOH was not found to be a purely diffusion controlled process where the square root of the scan rate followed a linear relationship with the currents of the anodic peaks. The CNF/NiO composite has shown, not only, a good stability as the potential was cycled between a large potential window, but also, the electrocatalytic properties was enhanced. This occurred as a result of the surface activation during the cyclic process. The impedance parameters were calculated from the EIS measurements proved that this system has two time constants; one for adsorption and the other for the charge transfer.

Figure . Nyquist plots of the experimental impedance data (scattering dots) measured potentiostatically at 0.5 V (SCE) in a frequency range between 100K and 0.1 Hz with an AC perturbation of 5 mV and the fitting results (solid lines) for CNF-supported Ni oxide composite calcined at 500 oC in (A) 6 M KOH and (B) 6M KOH + 1 M MeOH aqueous solutions at 25 oC. The inset image is the electrical equivalent circuit used for fitting the impedance spectra. 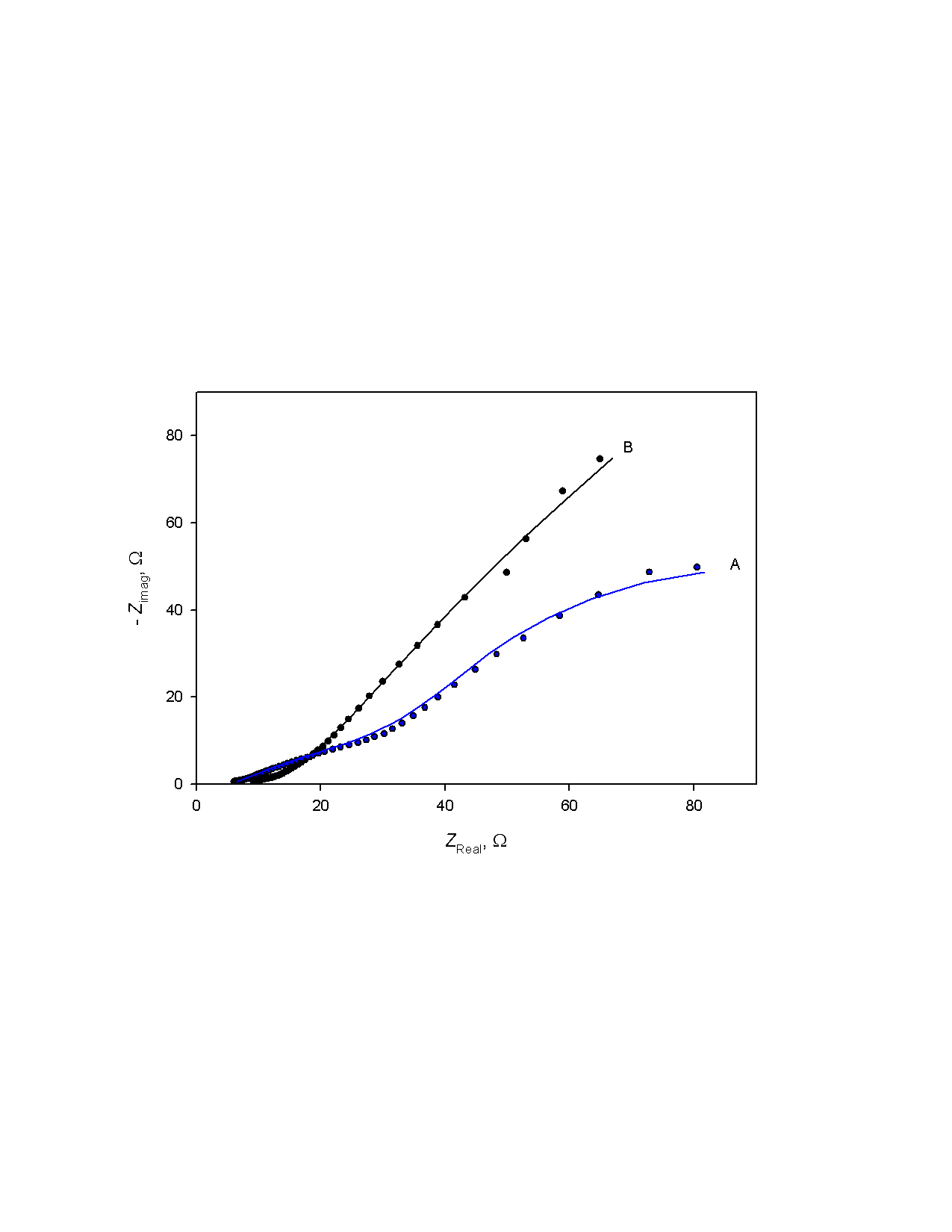