Bonnet Creek Ballroom XII, Lobby Level (Hilton Orlando Bonnet Creek)
Y. An (University of Florida), A. Behnam (University of Illinois at Urbana-Champaign), G. Bosman (University of Florida), E. Pop (University of Illinois at Urbana-Champaign, Stanford University), and A. Ural (University of Florida)
Graphene, which shows good electrical conductivity, high optical transparency, and mechanical flexibility, is a promising candidate for transparent, conductive, and flexible electrodes in optoelectronic and photovoltaic devices. Unlike conventional metal electrodes, graphene has the added advantage that its Fermi level and hence workfunction can be tailored by chemical doping or electrostatic gating. As a result, graphene can be used in traditional as well as novel device structures. For that purpose, integration of graphene into conventional semiconductor technologies, in particular those based on silicon, is of utmost importance.

In this talk, we discuss the fabrication of metal-semiconductor (MS) photodetectors [Fig. 1(a)], where chemical vapor deposition (CVD)-grown monolayer graphene [Fig. 1(b)] plays the role of the metal and p-type silicon (p-Si) is the semiconductor. We characterized the photodetector devices and extract important parameters which give insights into their fundamental electronic and optoelectronic properties.

First, we investigate the electronic properties of graphene/silicon junctions as a function of temperature. We find that thermionic emission is the dominant electronic transport mechanism above 260 K with a zero-bias barrier height of 0.48 eV. Using temperature dependent I-Vmeasurements, we investigate the reverse-bias dependence of the Schottky barrier height and conclude that the Fermi level change in graphene due to charge transfer from Si dominates this dependence.

We also characterized the photoresponse of photodetectors based on graphene/silicon Schottky junctions [Fig. 2]. The good photoresponsivity (~0.133 A/W at 633 nm) and external quantum efficiency (>15%) shows the great potential of this type of device for photodetector applications. Furthermore, we performed photoresponse measurements at different chopper frequencies and extracted the bandwidth of the photodetector.

Low frequency electronic noise spectra of the graphene/silicon device are also studied at both forward and reverse bias. The scaling of noise with device current shows SI ~ Iβ dependence, with β = 1 for forward bias and β = 2 for reverse bias. This β dependence is in agreement with empirical models reported previously. The noise spectra indicate that the electronic transport is dominated by thermionic emission, which is consistent with our temperature dependent I-Vanalysis.  Finally, we extracted important device parameters, including normalized photocurrent-to-dark current ratio, noise equivalent power, and detectivity, which are found to be better than those previously obtained for similar detectors based on carbon nanotubes.

Our results provide crucial insights into the fundamental electronic and optoelectronic properties of photodetectors based on graphene/silicon Schottky junctions, which is important for the integration of graphene based materials into existing semiconductor technologies. 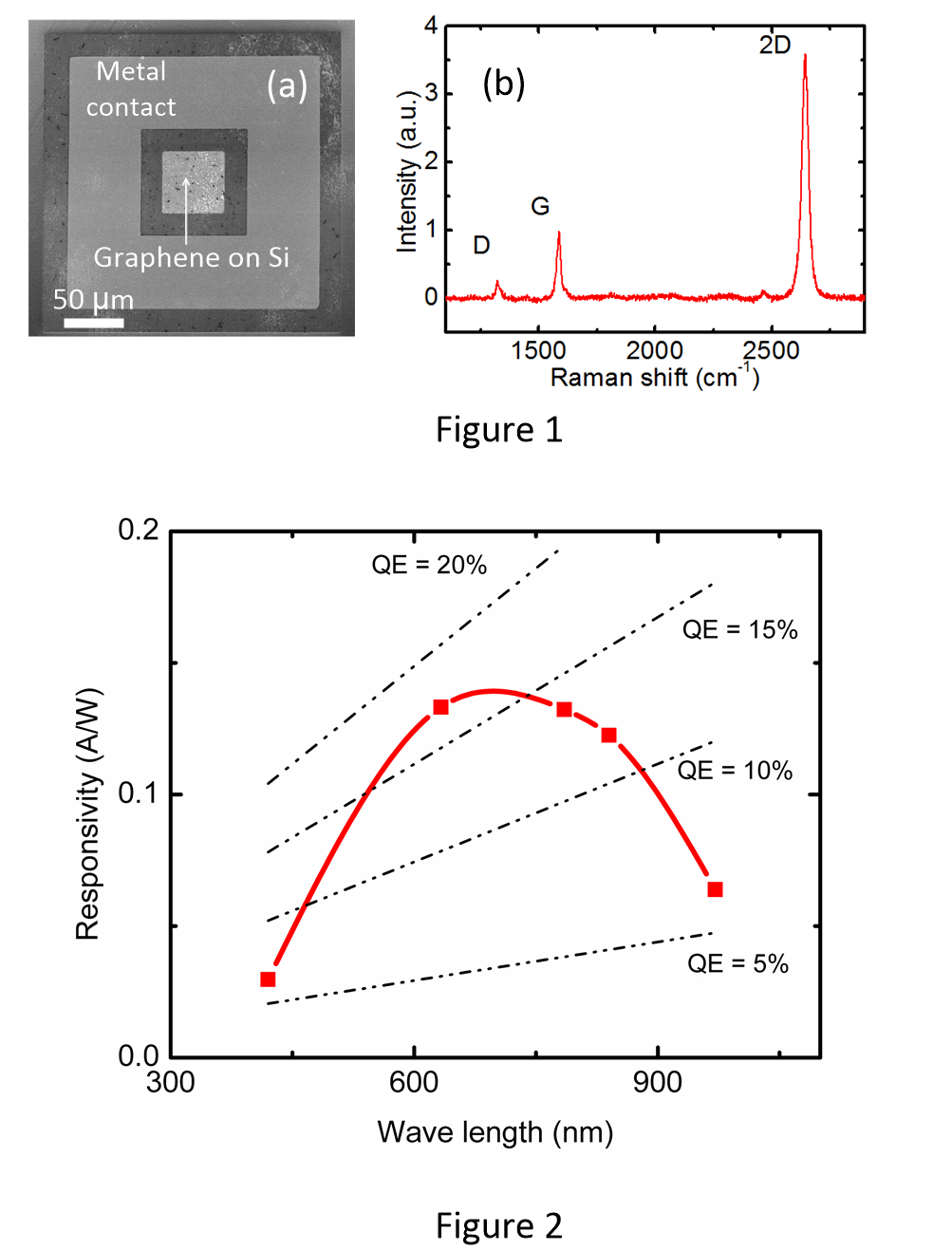