The search for non-precious metal catalysts (NPMC) to replace Pt for the ORR has led to the development of transition metal-based materials.   These NPMCs are generally synthesized by pyrolysis of a combination of metal salts, a nitrogen source (macromolecules or reactive gas) and a carbon support.   State of the art NPMCs are based on Fe and Co and are synthesized in elaborate multi-step processes combining high temperature treatment (900 oC to 1050 oC) with acid wash or reactive gas (NH3) pyrolysis. These catalysts have proven to have good ORR activity but limited durability 2,3.

In nature, Cu oxidases are known to reduce oxygen at approximately 1.2 V vs. RHE4, which makes Cu an obvious candidate for ORR catalysts. In our laboratory we have synthesized a new class of NPMCs for the ORR based on immobilized copper (Cu) complexes of substituted triazoles, supported on carbon black.  These catalysts are synthesized by covalently attaching ligands to the carbon surface via diazonium coupling, yielding a phthalocyanine-like molecule.  Figure 1 shows an example of a typical synthesis scheme for Cu triazolo-phthalocyanine (Cu-TrPc) catalyst.

The as-synthesized catalysts show low catalytic activity when compared to Pt, but offer a good starting point to understand the structured catalytic centers and the ORR mechanism.  Some of our Cu catalysts, tested via rotating ring disk electrode experiments (RRDE), have shown onset potentials as high as 0.6 V vs. RHE at pH 1 with less than 5 % H2O2 production. After a one step pyrolysis at 950 oC in inert atmosphere, the activity of the Cu-TrPc catalyst is significantly improved, reaching a RRDE onset potential of 0.82 V vs. RHE, as shown in figure 2.

Figure 2. RDE plots comparing the catalytic activity of Cu-TrPc complexes without heat treatment (red) and after heat treatment under N2 gas at 950 oC.  Experiments were conducted in 0.1 M H2SO4, at 1600 rpm and at a scan rate of 10 mV/s.

We gratefully acknowledge the support of this work by the NSF-funded TN-SCORE program, NSF EPS-1004083, under Thrust 2. 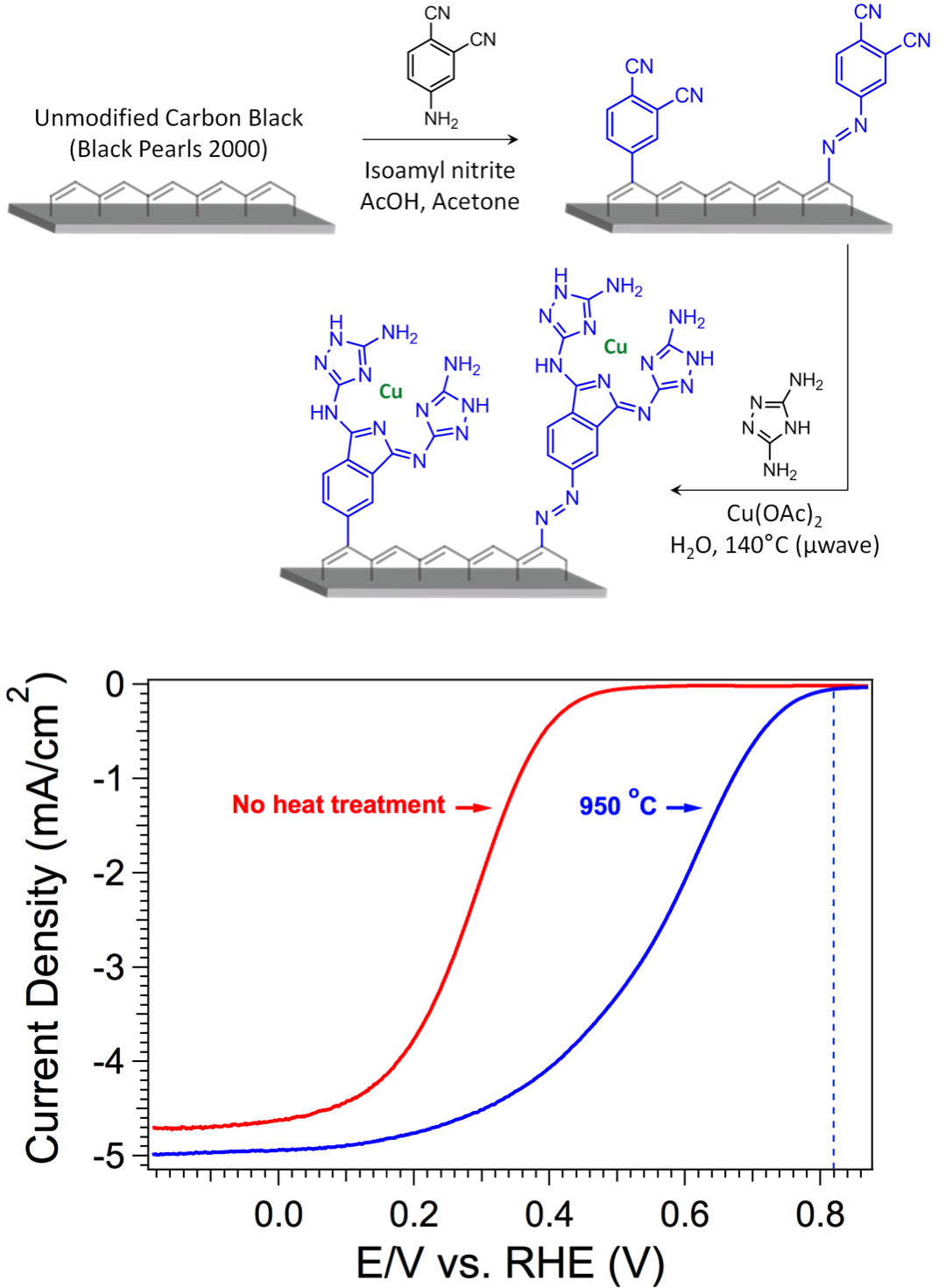