Although platinum is widely used as an electrocatalyst in low-temperature fuel cells because of its high activity for the oxygen reduction reaction (ORR) and its stability at cathode operating potentials, Pt can dissolve in acidic media. The dissolution rate increases at higher potentials and can accelerate under potentiodynamic conditions [1]. Dissolution of nano-Pt, highly dispersed on carbon support, was measured in 0.57 M HCLO4aqueous media using ICP-MS [2]. A solid solution theory was formulated to explain the observed peak in dissolved Pt concentration at ~1.1 V on the basis of enhanced dissolution at high potentials coupled with the protective oxide formation that stabilizes Pt by reducing its activity in the solid solution [3]. The observed growth in Pt particles and the resulting electrochemical surface area (ECSA) loss under cyclic potentials was analyzed using a model that determines the dynamics of particle size evolution due to dissolution of Pt catalyst into the electrolyte, redeposition of Pt from the electrolyte onto the Pt particles, and sintering of Pt particles. The simulation results suggest that the observed coarsening in size of Pt particles is primarily due to coalescence/sintering mechanism rather than Ostwald ripening [4].

Carbon corrosion has been investigated in membrane electrode assemblies fabricated with varying degrees of graphitization [5]. The rate of carbon oxidation to CO2 was monitored by non-dispersive infrared spectroscopy (NDIR) at different temperatures, relative humidities, potentials and sweep rates. As observed by others [6], the measured CO2 emission rates had characteristic profiles showing multiple peaks and hysteresis under triangular potential cycles with variable lower potential limits (0.1-1.0 V), upper potential limits (0.6-1.3 V), and scan rates (2-50 mV.s-1). The observed profiles are consistent with a dynamic corrosion model that considers four electrochemical reactions for peroxide attack at low potentials, reversible formation of active surface oxides, conversion of active oxides to CO2, and reversible formation of passive oxides. Same model with different rate constants can describe the corrosion data for different carbon supports except that two-types of sites must be considered for Vulcan XC-72 (V-Type) and only one type of sites for high surface area Ketjenblack (E-Type) and graphitized KB (EA-Type).

Preliminary work has been performed to extend the Pt growth model to include Pt coalescence that occurs as carbon corrodes, and the cathode catalyst layer (CCL) compacts due to collapse of pores and changes in carbon structure. Figure 1 presents empirical correlations that have been developed for Pt growth factor and Pt stratification factor. The first factor accounts for the effect of Pt dissolution and redeposition, and the second factor accounts for partial loss of three-phase boundary due to carbon corrosion. The product of the two factors gives Pt utilization, defined as the ratio of ECSA to geometric surface area calculated from the modeled evolution of Pt size distribution. Combined experimental and theoretical work shows that the loss in ECSA due to Pt dissolution results in performance degradation not only due to increased ORR kinetic overpotentials but also higher mass transfer overpotentials. In catalyst layers with low Pt loadings, increase in mass transfer overpotentials with ageing can greatly exceed the increase in kinetic overpotentials. Also, much of the increase in mass transfer overpotentials results from the greater resistance to O2 diffusion in the CCL ionomer [7].

This work is supported by DOE-EERE Fuel Cell Technologies Office with Dr. Nancy Garland as the Technology Development Manager. 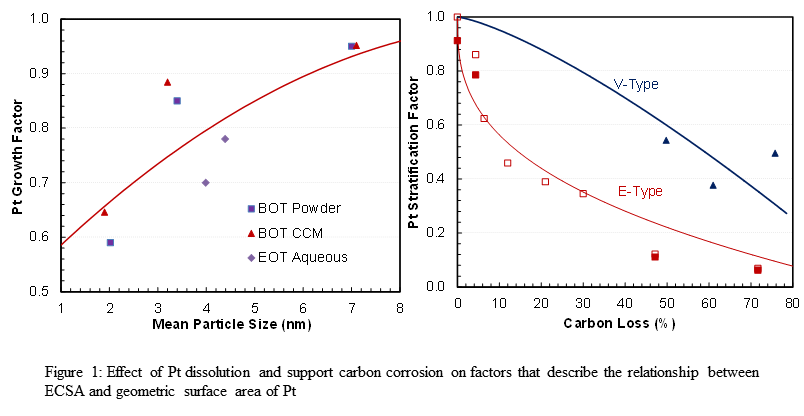