In turn, the Stokes Einstein relationship (Equation 2) specifies diffusion coefficient and viscosity η are inversely related. Equation is for a spherical diffusion species of radius r, k is the Boltzmann constant, T is temperature.  If viscosity varies in space as η(x), then D(x) varies in space proportional to 1/η.

Here, Ficoll is used as a template to form a graded film of the ion exchange polymer, Nafion® (DuPont). Films are formed on electrodes by cocasting Ficoll and Nafion. Alternatively, a cast film of Ficoll can serve as the template for the Nafion. Films are evaluated by imaging. When compared to a uniform Nafion film, cyclic voltammograms for outer sphere redox probes that pass through the ion exchange polymer are altered. Sigmoidal as well as Gaussian voltammograms are observed, dependent on conditions of film formation.  The structural morphology changes imprinted on formation of Ficoll Nafion layers alters flux through the ion exchange polymer layer.

References and Acknowledgments: Support of the National Science Foundation and the University of Iowa is gratefully acknowledged.  Thanks also to Dick Buck for his example as a thoughtful scientist and mentor. 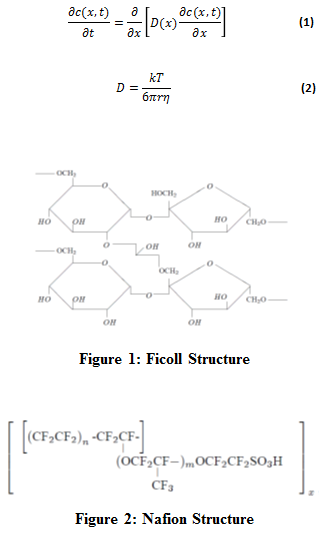