Lithium-ion batteries with their unique high voltage, high energy density chemistries have come to fruition decades of fundamental research conducted in electrochemical systems and materials. The development of a number of plug-in hybrid and fully electric vehicles (EV) using lithium-ion technology and their favorable market response is the harbinger of a long-awaited transition in automotive technology. Despite these advances, there is still a genuine need for increasing energy densities for the successful transition to EVs (1, 2). Advances in lithium-ion anode technology have made it possible to obtain ~1500 mAh/g anodes with superior cycle life (3-5). However, cathode research has been rather stymied in contrast on account of the challenges faced in designing stable, conductive materials with high capacities. Cathode capacities thus far have been limited to ~ 300 mAh/g in high voltage (1, 6) lithium manganese-nickel-cobalt oxide chemistries. Lithium sulfur and lithium-air batteries though well-known but challenging to execute, hold much more promise of matching anode capacities on account of their theoretical capacities of 2567 and 3505 Wh/kg respectively(2). The dissolution of sulfur through the formation of soluble polysulfides and the poor electronic conductivity of sulfur are however, major problems hindering Li-S batteries.

It has previously been demonstrated that the use of highly conductive porous carbon matrix and carbon nanotubes can help circumvent these issues (7-10). In addition, the use of a carbon matte as a barrier layer to polysulfide transport has been demonstrated to be effective in retaining high capacity(11). There is however a need to translate this design into thick electrodes capable of delivering high overall electrode capacity. In this study, we coat pristine sulfur particles with carbon and an ionically conducting matrix using a simple chemical method. The thick electrodes were prepared using this procedure and were tested in 2025 coin cells with lithium counter/reference electrodes. We demonstrate excellent charge storage behavior of these composite electrodes at various charge-discharge rates. Extended cycling of these composite electrodes reveals much improved capacity retention. Figure 1 shows the electrochemical results of these different configurations. Results of these studies will be presented and discussed.

Figure 1 caption: Improvement in sulfur capacity retention by use of a lithium-ion conducting matrix 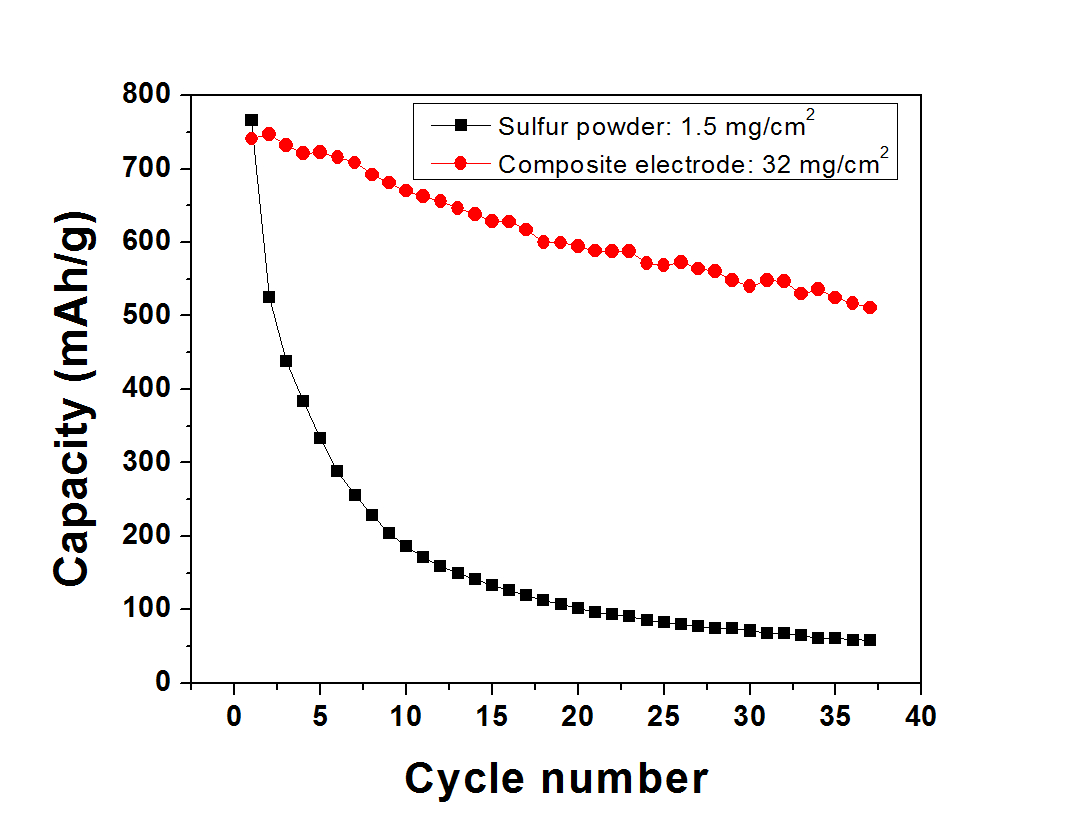