Bis(trifluoromethylsulfonyl)imide (TFSI-) - based ionic liquids (Fig.1) are known to have low cathodic reduction potentials at graphite electrodes that affect formation of protective layer on solid electrolyte interface (SEI)b. On the contrary, at metal electrodes including lithium, TFSI- anions favor electrolyte reduction which is due to stabilization of LiTFSI ion pair formed under reducing conditions in presence of lithium cations and TFSI anions.

The results for symmetrical coin cells (CR2025) constructed with lithium disks deposited onto 0.5mm spacers and separated by CelgardTM 20mm polyethylene membrane with 12 mL of ionic liquid on each side of the separation membrane will be presented.  The electrochemical performance of the symmetrical cells will be compared with the results obtained for the half-cells with the earlier developed silicon-based working electrode.

EMIM TFSI and PYR14 TFSI ionic liquids in presence and absence of LiPF6 for symmetrical cells and half-cells will be discussed in terms of coin cell performance, impedance, chemical transformations, and changes to the morphology that take place during cell storage, solid electrolyte interface (SEI) formation, and charge-discharge cycling.

NMR study of the ionic liquids will be addressed to study the dynamics of the cations, anions, and ion pairs in presence and absence of ionic additive LiPF6. Pulsed field gradient NMR is used to determine self-diffusion coefficients of 1H and 19F. 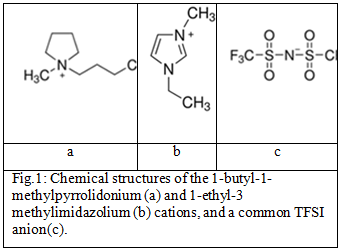