Floridian Ballroom F, Lobby Level (Hilton Orlando Bonnet Creek)
T. R. Garrick, W. Diao, J. Tengco, J. Monnier, and J. W. Weidner (University of South Carolina)
A series of Ru-Pt bimetallic catalysts prepared by the electroless deposition of controlled and variable amounts of Ru on the Pt surface of a commercially-available 20 wt% Pt/C catalyst has been characterized and evaluated for the oxidation of methanol at the anode of a PEM fuel cell.  The activity of each Ru-Pt catalyst was determined as a function of surface composition; all bimetallic catalysts exhibited performances greater than either of the monometallic counterparts.  For the Ru-Pt bimetallic catalysts, activity passed through a maximum at approximately 50% (atomic) theoretical, monodisperse Ru coverage. The activity of this composition for methanol oxidation was much higher than for either monometallic Pt or Ru catalysts or the commercially-available Ru-Pt/C catalyst.

Direct methanol fuel cells (DMFC) are a good candidate for a power source in portable electronic devices for several reasons, including high energy density and ease of handling (liquid vs high pressure H2) [1].  Platinum catalysts are effectively able to catalyze the oxidation of Methanol to carbon dioxide; however, the surface Pt sites become rapidly poisoned by strongly adsorbed CO that is also produced during the oxidation process to limit the overall rate of Methanol oxidation [1-4]. Studies have shown that carbon-supported, bimetallic catalysts composed of Pt and Sn, or more preferably Pt and Ru, are more active for the oxidation of Methanol and Ethanol compared to catalysts composed solely of Pt [5-11]. Supported Pt-Ru catalysts are currently recognized as the most active catalyst formulations for methanol oxidation in acidic media [12]. The mechanism by which these bimetallic catalysts alleviates CO poisoning presumably involves the adsorption of H2O on Ru sites to form a Ru-OH species which oxidizes CO strongly adsorbed on Pt to form CO2 and H+. Thus, it is important for Ru and Pt to co-exist in close, proximal contact on the surface for the Ru-assisted oxidation of CO to occur. It follows that a bimetallic catalyst where the Ru is evenly distributed in a controlled amount on the Pt surface should exhibit enhanced performance. 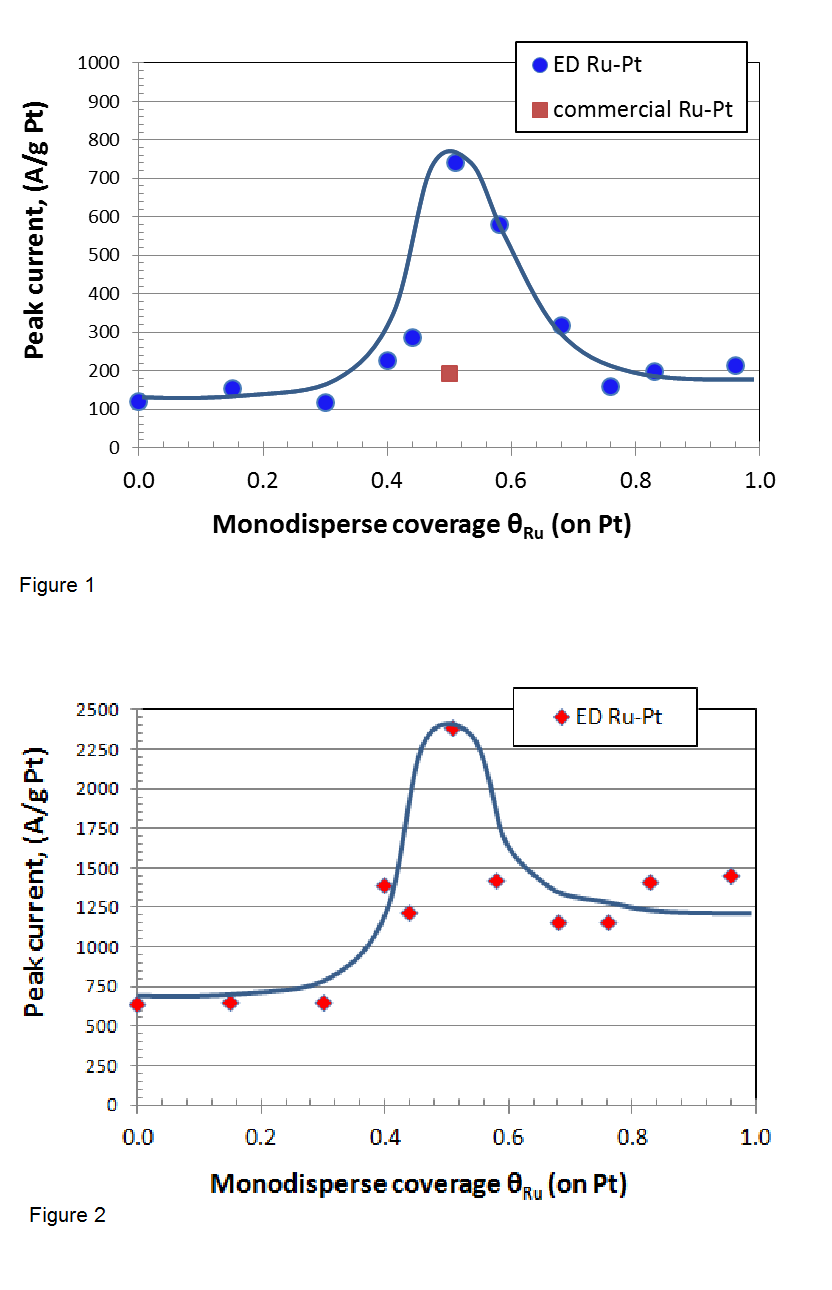