The future of renewable energy, due to its inherent variability, will rest on the capacity of the electrical grid to reconcile power production and consumption. Electrical energy storage can take many forms, one of which is the redox flow battery (RFB), which boasts some unique advantages over other storage technologies. Non-aqueous RFBs, while far less developed than aqueous chemistries, may possess benefits over aqueous RFBs including higher voltage and greater energy density.

The electrochemistry of a series of anion radicals for possible use in flow batteries is reported. The solvent utilized in this work is tetra(ethyleneglycol) dimethylether (TEGDME) and was chosen due to its very large voltage window (~4 V vs. lithium) and capability of dissolving large concentrations of aromatic compounds. An appropriate triflate salt (sodium or lithium) was added to the TEGDME to improve conductivity, facilitating electrochemical measurements. After removing as much of the impurities as possible, TEGDME with triflate salt served as a stable electrolyte with nearly no observable electrochemical reactivity. Anion radicals were formed by simply adding sodium or lithium metal to various aromatics dissolved in TEGDME and triflate salt.

The aromatics considered in this work covered a range of complexity, from biphenyl and naphthalene up to large compounds such as coronene. Our initial screening found that the redox potentials of the aromatic-anion radical couples also spanned a large redox potential range. Some were highly reversible and some were quite unsuitable for a RFB due to irreversible redox behavior. Sodium- and lithium-generated anion radicals behaved similarly, with the sodium-generated radicals exhibiting generally more favorable redox behavior (larger current and better reversibility).  In addition, many compounds also formed dianions, allowing for greater potential range and energy density for that material.

Ultimately, the goal is to develop a non-aqueous RFB. Initial tests to screen materials and improve cell design using the biphenyl-anion radical for the negative side are in progress. Capitalizing on the benefits of this non-aqueous RFB chemistry could result in lower overall system cost for electrical energy storage compared to other technologies.

Acknowledgement:  We gratefully acknowledge the support of Dr. Imre Gyuk and the US DoE Office of Electricity for support of this work. CNS and JN acknowledge Laboratory Direct Research and Development (LDRD) seed funding for this work. 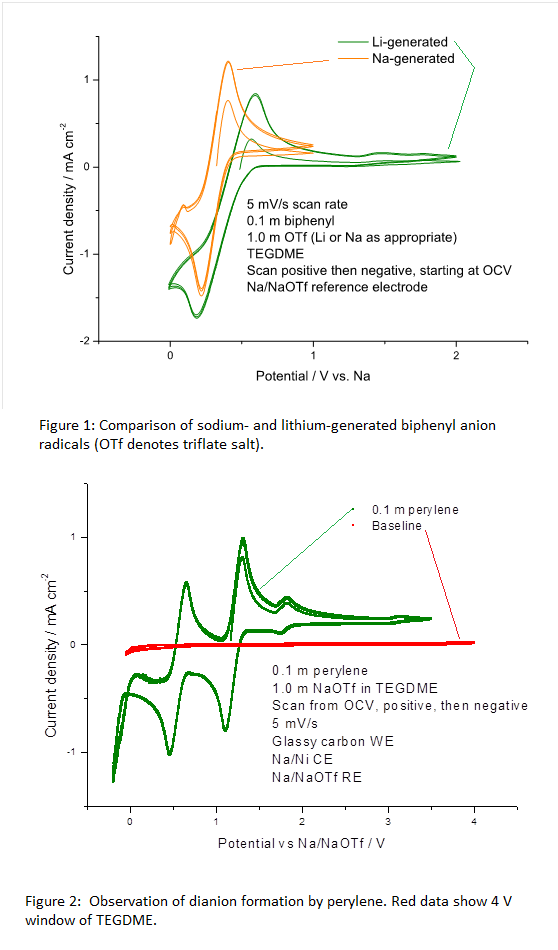