Supercapacitors are rechargeable electrochemical energy storage devices which can provide high capacitance, suitable for high power applications [2]. Based on the charge storage mechanism, supercapacitors can be divided into three typical classes: (i) electrochemical double layer capacitors (EDLCs), (ii) pseudocapacitors, and (iii) hybrid-supercapacitors. By developing hybrid-supercapacitors which integrate high specific surface area CNTs and thin-film of pseudocapacitive MnO2 material, we can achieve high performance at low cost. In addition to the double layer capacitance from the high surface area, we get additional capacitance from the pseudocapacitive behavior involving rapid, reversible faradaic reactions where the oxidation state of Mn varies between +3 and +4 in conjunction with the intercalation and deintercalation of the electrolyte cation, as represented by the following equation [2,3]: MnO2 + X+ + e- ↔ MnOOX (X= H, Li, Na, K).

In this paper, we present fabrication and characterization of advanced 3D micropatterned MnO2/CNT electrodes on SiO2/Si substrates and nanostructured ultracapacitor electrodes using MnO2/CNT on graphite foil substrate for integration into an ultracapacitor prototype cell. Conventional silicon microfabrication and hot-filament CVD processes were combined to fabricate CNT microelectrode arrays which were then coated with MnO2 using direct electrochemical deposition. The SEM micrographs in figure 1 show typical structures that have been fabricated including an interdigitated design. Low-cost, thermal CVD process in a tube furnace was used to synthesize CNTs, which act as the current conductors, on flexible, conducting graphite foil current collector. Thin-film MnO2 deposition, directly on the CNT was achieved by electrochemical technique which provides excellent bonding between the two for enhanced stability. Such a structure provides a 3-D surface allowing for better MnO2 incorporation, shorter solid state diffusion of cations, facile electron transfer, and over all improved charge storage performance. The SEM images for the MnO2 coated CNTs on graphite substrate can be seen in figure 2, where the thin-film coating on individual CNT is visible as well as the porous microstructure of the MnO2can be distinguished.

Electrochemical characterization was performed using cyclic voltammetry, galvanostatic charge-discharge and electrochemical impedance spectroscopy. In a three electrode configuration with Ag/AgCl reference, the microelectrode array delivered a high value of 1.8F/cm2 or 240F/cm3. The CVs seen in figure 3 show the increase in current with increasing MnO2 thickness, showing the direct effect of MnO2 on the electrode performance. The flexible electrode MnO2/CNT/Graphite ultracapacitor delivered 2.8F capacitance which is equal to 235mF/cm2 or 250F/g at 2mV/s. This translates into a high specific energy of 34.7Wh/kg and specific power of 7.6kW/kg. Cyclic voltammograms recorded at different scan rates 2mV/s-100mV/s can be seen in figure 4. These results are based on aqueous electrolyte. Detailed fabrication and characterization of the novel ultracapacitors will be presented. 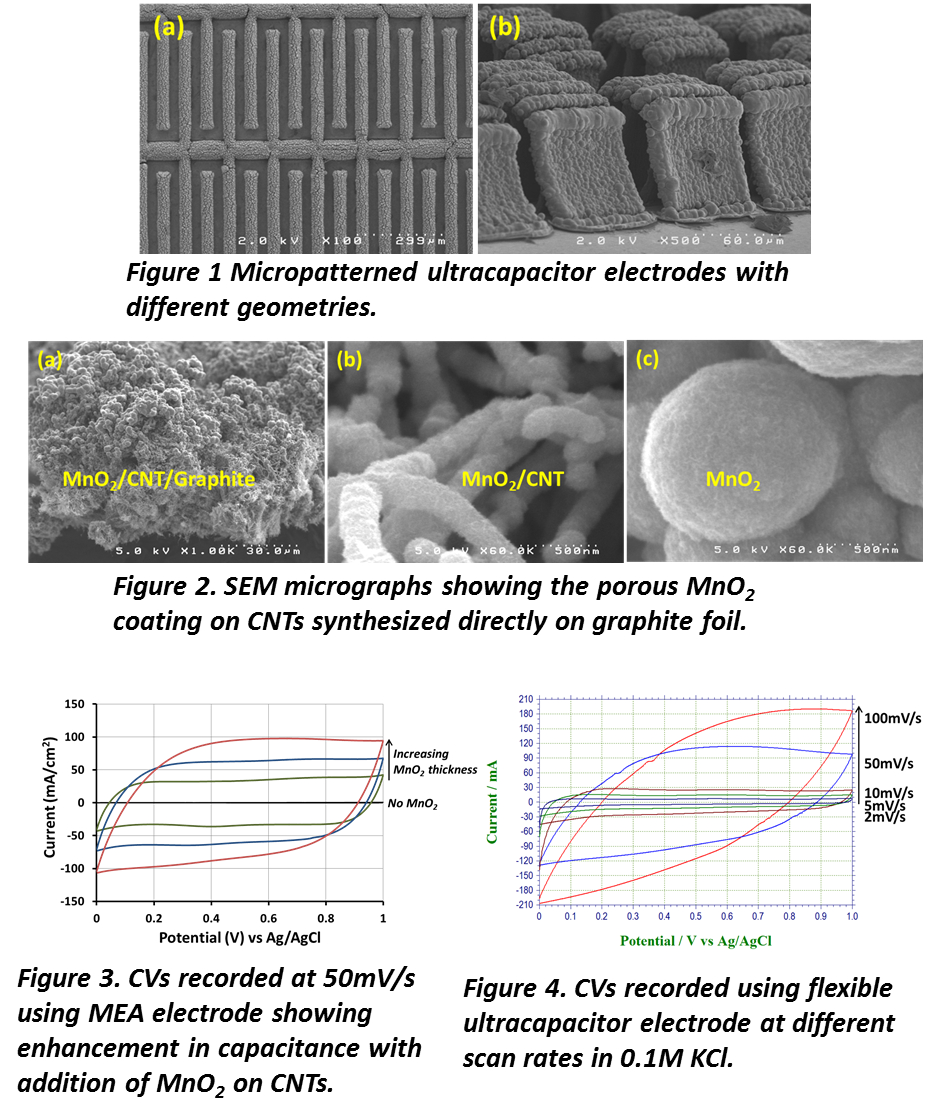