Anion exchange membranes reported in the literature to date suffer from chemical instability in alkaline environments, which are found in both AEMFCs and metal air batteries. The chemical instability is primarily a result of the degradation of the cationic moieties responsible for the transfer of the hydroxide ions.

For this work AEMs based on functionalized polyphenylene oxide (PPO) were synthesized. PPO was selected because it is commercially available, inexpensive, and demonstrates good stability in alkaline environments3,4. AEMs were made by functionalizing PPO with quaternary ammonium groups; dimethylhexylamine, dimethyldecylamine, or trimethylamine. For each of these groups a membrane was synthesized with a high and low degree of functionalization. The resulting AEMs were studied for physical and electrochemical properties and compared against a commercially available AEM.

The conductivity of the membranes equilibrated in solutions between 1 and 10M potassium hydroxide and at different humidity levels was determined through electrochemical impedance spectroscopy. The equilibrium concentration of water and base within the membranes was studied. The mechanical properties of the membranes were determined with Dynamic Mechanical Analysis.

Degradation of the polymers was monitored by immersing the membranes in solutions between 1 and 10M potassium hydroxide at elevated temperature. The conductivity of the membranes was measured over time to determine loss in electrical properties. Membranes were also tested in situ in anion exchange membrane fuel cells and zinc air batteries.

The membranes in lower molarity solutions were found to become more brittle over time. Thin layer chromatography was conducted on the solutions in which the membranes were held during degradation studies. The results indicated that polyols were forming, indicating that the cationic groups cause the polymer to undergo a SN2 reaction.

We gratefully acknowledge the support of ZAF Energy Systems for their support of this work. 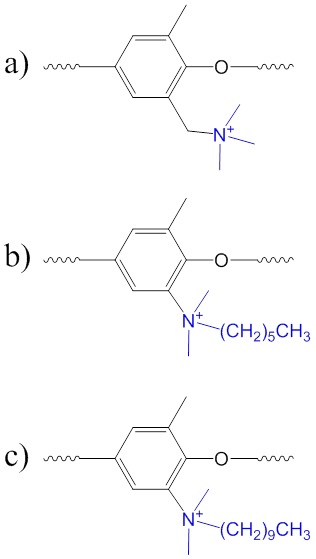