To gain deeper understanding of the ORR mechanism, an in situ electrochemical half cell for EPR has been designed and applied to probe the mechanism of the ORR catalyzed by a Cu(II)-3,5-diamino-1,2,4-triazole based (shown here) and other catalysts. Simultaneous observation of electrochemical behavior and the corresponding Cu(II) EPR signal evolution at different potentials was realized as shown in Figure 1. The intensity of the Cu(II) signal decreases as the potential steps negative because more Cu(II) is reduced to Cu(I) at more negative potentials. In Figure 2, the EPR spectroscopic behaviors of Cu(II) during a cyclic voltammogram are different in the presence and absence of O2, with a shift in potential indicating a complex formation between O2and Cu ions during ORR catalysis. A study of the effects of oxygen concentration will be conducted to estimate the amount of active catalytic sites in the catalyst. A quantitative relationship will be investigated to determine the reaction order of Cu species in the ORR catalysis. Finally, this method will be applied to a number of related non-precious metal catalysts.

The authors gratefully acknowledge the support of the US DOE Office of Fuel Cell Technology and the office of Naval Research for financial support of this work. 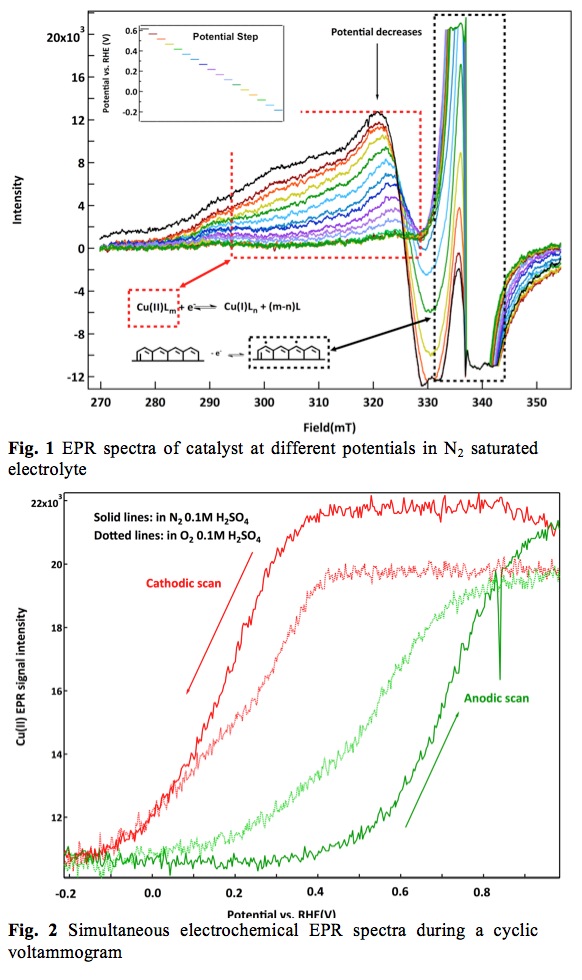