Hamilton, Ground Level (Hilton Orlando Bonnet Creek)
Z. Chen, D. Higgins, and M. H. S. Seo (University of Waterloo)
Polymer electrolyte membrane (PEM) fuel cells have been viewed as promising power source candidates for transport, stationary, and portable applications due to their high efficiency and low emissions. The platinum is the most commonly used catalyst material for the oxygen reduction reaction (ORR) at the cathode of PEM fuel cells; however, despite ample investigations being done on this type of catalyst, the performance and durability of platinum still need to be improved in order to meet the commercial target. The material on which the catalyst is supported is important for the high dispersion and narrow distribution of Pt nanoparticles, and these characteristics are closely related to electrocatalytic activity of the catalysts. The support materials can influence the catalytic activity by interplaying with catalytic metals, and the durability of the catalyst is also greatly dependent on its supports.

Graphene has recently emerged as a highly promising catalyst support material for PEMFC applications owing to its immense surface areas, along with excellent conductivity and electron transfer capabilities that are important criteria pertaining to electro-catalysis. Graphene is theoretically composed of only graphitic carbon atoms which can provide added resilience against carbon corrosion during PEMFC operation, although the relatively inert and hydrophobic nature of its surface does not culminate in facile Pt deposition, requiring functionalization procedures to obtain well dispersed nanoparticles and overcome stability limitations. To this end, nitrogen doped graphene and other graphitic carbons have been extensively developed and investigated for fuel cell catalyst applications, either as stand-alone ORR electrocatalysts in alkaline media as Pt nanoparticle supports under acidic (i.e. PEMFC) conditions. The presence of nitrogen dopants has been reported to exert a “tethering” effect on Pt nanoparticles, providing both beneficial catalyst activity and stability enhancements. While density functional theory simulations exist in the literature investigating the adsorption and binding interactions between Pt and either nitrogen and boron doped graphene or carbon nanotubes (CNTs), there exists an overall lack of fundamental understanding regarding the Pt-heteroatom doped graphene catalyst-support interactions and their associated impact on ORR performance and operational stability. Furthermore, the impact of graphene doped with various other heteroatoms (i.e. sulfur) remains largely unexplored despite their high potential for applications as ORR catalysts or catalyst support materials. Elucidation of these important considerations can be provided by effectively linking fundamental computational simulations with detailed experimental investigations.

In the present work, we report the development of sulfur-doped graphene (SG) by thermal shock/quench annealing a mixture of graphene oxide (GO) and phenyl disulfide (PDS). These materials were used as Pt nanoparticle support materials, whereby after Pt deposition onto SG (Pt/SG) by a modified ethylene glycol (EG) method, uniformly sized nanoparticles well dispersed across the entirety of the SG surface were successfully obtained. Improved ORR activity was found for Pt/SG in comparison to Pt supported on un-doped graphene (Pt/G) along with commercial state of the art Pt/C (Figure 1). Furthermore and most notably, we also observed significantly enhanced stability of Pt/SG (Figure 1).

On the basis of these observations, we performed ab initio density functional theory calculations to investigate the interactions occurring between SG and Pt and elucidate the root causes of ORR performance and stability enhancements. We found that the strengthened interaction and binding energies between Pt and SG arose, and could exclusively be linked to sulfur incorporation based on comparative investigations with un-doped G. Specifically, sulfur doping led to stronger adsorptive and cohesive binding energies with Pt, leading to the aforementioned catalyst-support tethering effect, along with negatively shifting the d-band center of the Pt atoms. These findings were used to explain the dramatically enhanced stability and improved activity of Pt/SG, respectively, in comparison to both Pt/G and Pt/C. This work represents the first comprehensive report of fundamental ab initio simulations linked to rigorous experimental investigations for sulfur doped graphene, and furthermore Pt/SG is presented for the first time as a highly active ORR catalyst with exemplary stability for PEMFC applications. 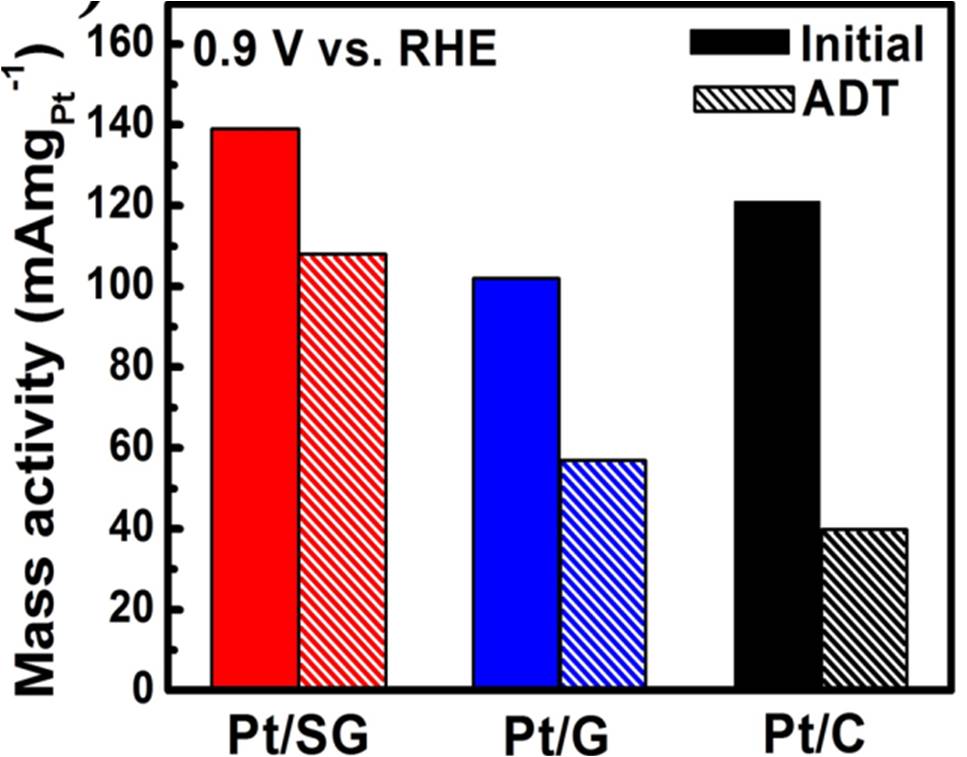