Bonnet Creek Ballroom III, Lobby Level (Hilton Orlando Bonnet Creek)
K. L. Harrison and K. R. Zavadil (Sandia National Laboratories)
A number of key science questions must be answered to establish the limits of achieving reversible and efficient oxygen electrochemistry in aprotic organic electrolytes. Such information is essential for the development of rechargeable alkali metal – oxygen batteries. In this paper, we seek to determine how the galvanostatic rate affects the nucleation and growth of lithium peroxide on relevant substrates. Rate has been shown to drastically change the morphology and properties of the lithium peroxide product. We investigate the nucleation and growth process through electrochemical scanning probe microscopic (EC-SPM) measurements. Examining the rate and electrode dependences on lithium peroxide formation reveals whether lithium peroxide formation is driven by nucleation at the electron-transfer sites or by saturation of the superoxide and subsequent disproportionation in the aprotic electrolyte, resulting in precipitation at an electrode surface. If a through-solution pathway is operative, we need to understand where peroxide is likely to nucleate, the form and properties with which it grows as a function of discharge rate, and whether the growth sites are likely to support sustained electron transfer during the oxygen evolution or charging reaction. This information is essential for determining suitable cathode architectures.

EC-SPM measurements for 1 M lithium bis (trifluoromethane) sulfonamide (LiTFSI) in tetraethylene glycol dimethyl ether (TEGDME) support a through-solution mechanism for lithium peroxide nucleation and growth. Previous EC-SPM measurements have been performed under potentiometric control. To understand the effects of rate on nucleation and growth of lithium peroxide and to represent a realistic constitutive Li-O2electrode interface, we operate under galvanostatic control. For both (111) textured gold and highly ordered pyrolytic graphite (HOPG), we observe a significant delay between the onset of the galvanostatically driven oxygen reduction reaction and the first appearance of a solid product, which supports a through-solution saturation and precipitation mechanism.

The difference in distribution of active sites on gold and HOPG can be used to understand the lithium peroxide reaction mechanism. As shown in Figure 1, we observe a compact, uniform film (~1.5 nm) on gold electrodes, which is expected because the area of the gold electrode consists of equivalently active sites. On graphite electrodes, we find that the morphology, properties, and spatial distribution of lithium peroxide are rate-dependent, as has been found for carbon cathodes. At high rates on HOPG, as shown in Figure 2, lithium peroxide forms fairly uniformly without strong step edge dependence, despite higher charge transfer activity of active defect sites on the step edge compared to the basal plane. Conversely, at low rates, initial nucleation is directed preferentially toward the step edges, consistent with their higher activity. It is difficult to determine whether step edges are the preferred nucleation site or if higher activity drives superoxide saturation at the steps, leading to disproportionation and precipitation. However, additional measurements using lithium peroxide pre-saturated electrolyte show no nucleation preference at the step edges even at slow rates. This result indicates a through-solution precipitation mechanism because the locations of the electron transfer sites (step edges) do not correlate with the locations of lithium peroxide formation. Furthermore, the delay observed between initiation of the discharge and lithium peroxide formation is greatly reduced in the pre-saturated electrolyte, further indicating a through-solution precipitation mechanism. 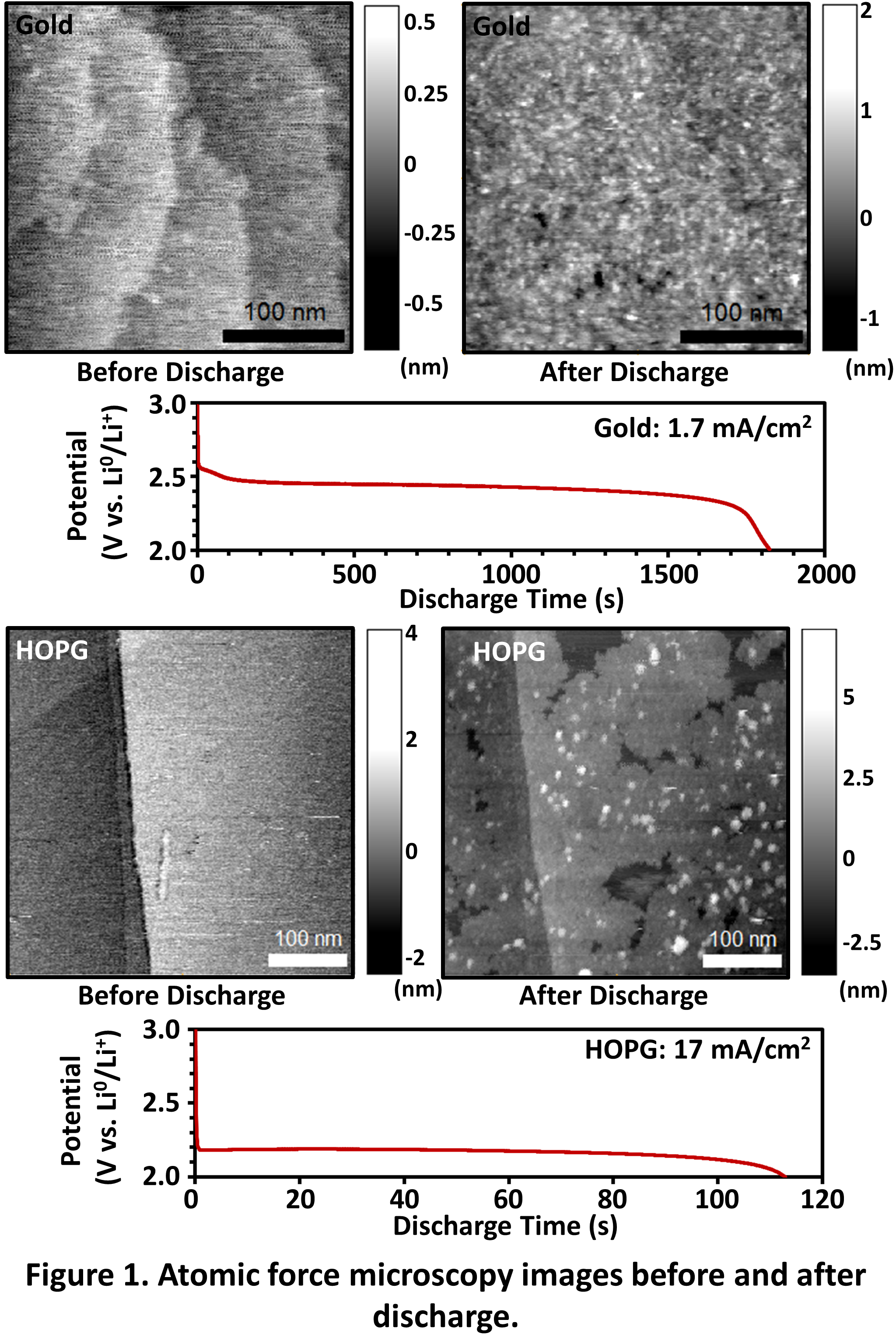