Bonnet Creek Ballroom I, Lobby Level (Hilton Orlando Bonnet Creek)
S. Lau and L. A. Archer (Cornell University)
Li/O2 batteries are of contemporary interest because of their high theoretical gravimetric energy density of ~11 kWh/kg. However, several factors limit the cell’s discharge depth and rechargeability. Commonly cited factors include transport of oxygen to the cathode surface, pore clogging, and charge transport, but current literature lacks consensus on which of these are most significant. To gain insight on the relative importance of these mechanisms, we investigated the cell’s limiting behavior using a combination of theory and experiment.

A nanoscale stochastic model was developed to simulate the growth of a single Li2O2 nucleation site during discharge. Growth progressed according to a kinetic Monte Carlo routine in which the probability of an incremental growth step is weighted according to the local Li+ and O2 concentrations. The predicted Li2O2 morphologies are consistent with SEM observations: Li2O2 deposits appear spherical in shape when the cell is discharged at low current density (~0.1 mA/cm2), but conform to the cathode surface when discharged at high current density (~1.0 mA/cm2). From this analysis, it is possible to determine that the change in morphology is due to the surface concentration of Li+ rather than the O2 concentration. Since Li2O2 is a bulk insulator, only the cathode surface experiences an increased Li+ concentration.

Building on these observations, a continuum model was also developed to examine the limiting factors on a more macroscopic scale. This model included Li+ and O2 mass transport, electrolyte potential, Butler-Volmer kinetics, and changes in porosity and surface area from Li2O2 deposition. The time-dependent concentration and porosity profiles were computed using a finite difference method. Neither the oxygen concentration nor the cathode porosity of the model cell decreased an appreciable amount during discharge. Additionally, the model cell discharged indefinitely when the electrical resistivity of the Li2O2 layer was neglected. These results suggest that Li2O2 resistivity, rather than oxygen transport or pore clogging, is the primary limiting mechanism in the Li/O2 battery and likely plays a significant role in rechargeability and cell lifetime.

Cell cycling experiments suggest that Li2O2 resistivity limits charging capabilities as well. For cells that were allowed to fully discharge to 2.35 V (an underpotential of 0.6 V), the capacity of the cell faded quickly within the first 10 cycles. However, if the discharge step was stopped prior to the drop in cell voltage, the capacity could be retained over an extended number of cycles. This finding is consistent with the growing number of reports in the field, which shows that extend cycle life of Li/O2 batteries can be achieved by enforcing strict limits on the depth of discharge.  We contend that this feature is a natural consequence of the voltage drop due to ohmic resistance through the Li2O2 layer. At full discharge, the resistance becomes significant during the subsequent charge stage, preventing the Li2O2 furthest from the cathode surface from oxidizing. At partial discharge, however, the Li2O2 layer is below this critical thickness, allowing for a more complete recharge.

Our observations point to direct approaches for enhancing lifetime and cycling stability of Li/O2 batteries, without the tradeoffs inherent in interrupted discharge experiments. The talk will also show that electrode and electrolyte designs that build rationally on these ideas lead to Li/O2 cell configurations that approach the potential of this battery platform. Through ex-situ and in-situ physical and electrochemical characterization, we also analyze the cathode surface and discuss how physical features of the battery cathode evolve during discharge and charge of the cell. 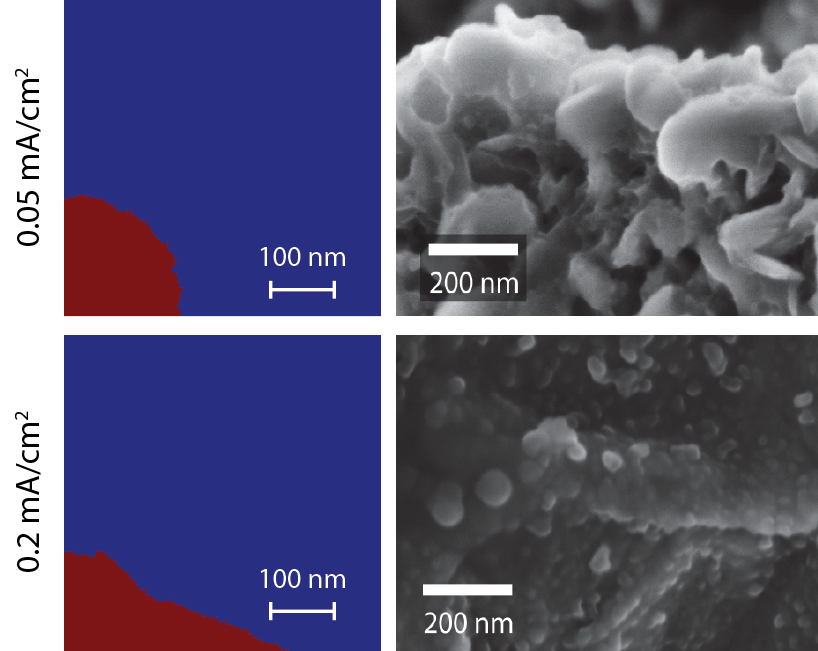