Grand Foyer, Lobby Level (Hilton Orlando Bonnet Creek)
M. Schrandt, A. Smirnova (South Dakota School of Mines and Technology), R. Cook (Zyvex Technologies, Rapid City, SD 57701), W. Rhine (Aspen Aerogels, Northborough, MA), and P. Kolla (SDSM&T)
In lithium ion batteries, Si-based anodes possess the highest specific capacity from four to 10 times greater than graphite [1, 2]. However, up to 400% volume expansion of Si during lithiation results in anode pulverization due to mechanical stresses. To avoid mechanical degradation of silicon, the critical value of the silicon particle size/wall thickness should be below the required threshold of <50nm [3,4]. Thus, it is crucial to maintain the silicon particle size in this range. The second major requirement for silicon anode in lithium ion batteries is to have the second conductive phase, e.g. graphite or graphene, in the form of a flexible coating that can withstand lithiation-delithiation without deterioration of the carbon phase. The goal is to develop a silicon-based anode that can withstand lithiation-delithiation cycles without mechanical degradation.

Through using structured silica precursors, the goal is to reduce the silica to silicon while maintaining its structure and porosity and thus mitigate the degradation during cycling. Two types of silicon oxide precursor materials that meet these requirements have been evaluated, among them hollow silica microspheres from 3M and silica aerogel from Aspen Aerogels. The major steps including silica synthesis and magnesium vapor reduction will be discussed.

Preparation of Si precursor materials has been performed by magnesium reduction followed by the removal of unnecessary impurities such as magnesium oxide and silica by washing the material in 1M HCl followed by 1% HF. Preliminary data from XRD confirms Si formation from the magnesiothermic reduction. SEM, TEM, EDS, BET, XRD, and Raman spectroscopy will be presented to analyze the structure and morphology of the materials. Structure dependent electrochemical properties such as cyclic voltammetry, cycleability, galvanostatic discharge, and cycle stability will be discussed.

Fig. 1: (A) TGA for 3M silica microspheres (iM30K) and (B) TGA for Aspen Aerogels’ SiO2 aerogel with Mg with the corresponding SEM images (C) 3M microspheres and (D) Silica aerogel precursors. (E) XRD for reduced SiO2 aerogel: top profile is fully washed reduced Si, middle profile is after reduction but before washing, and bottom profile is for a Si nanopowder reference to vindicate successful Si reduction from SiO2. 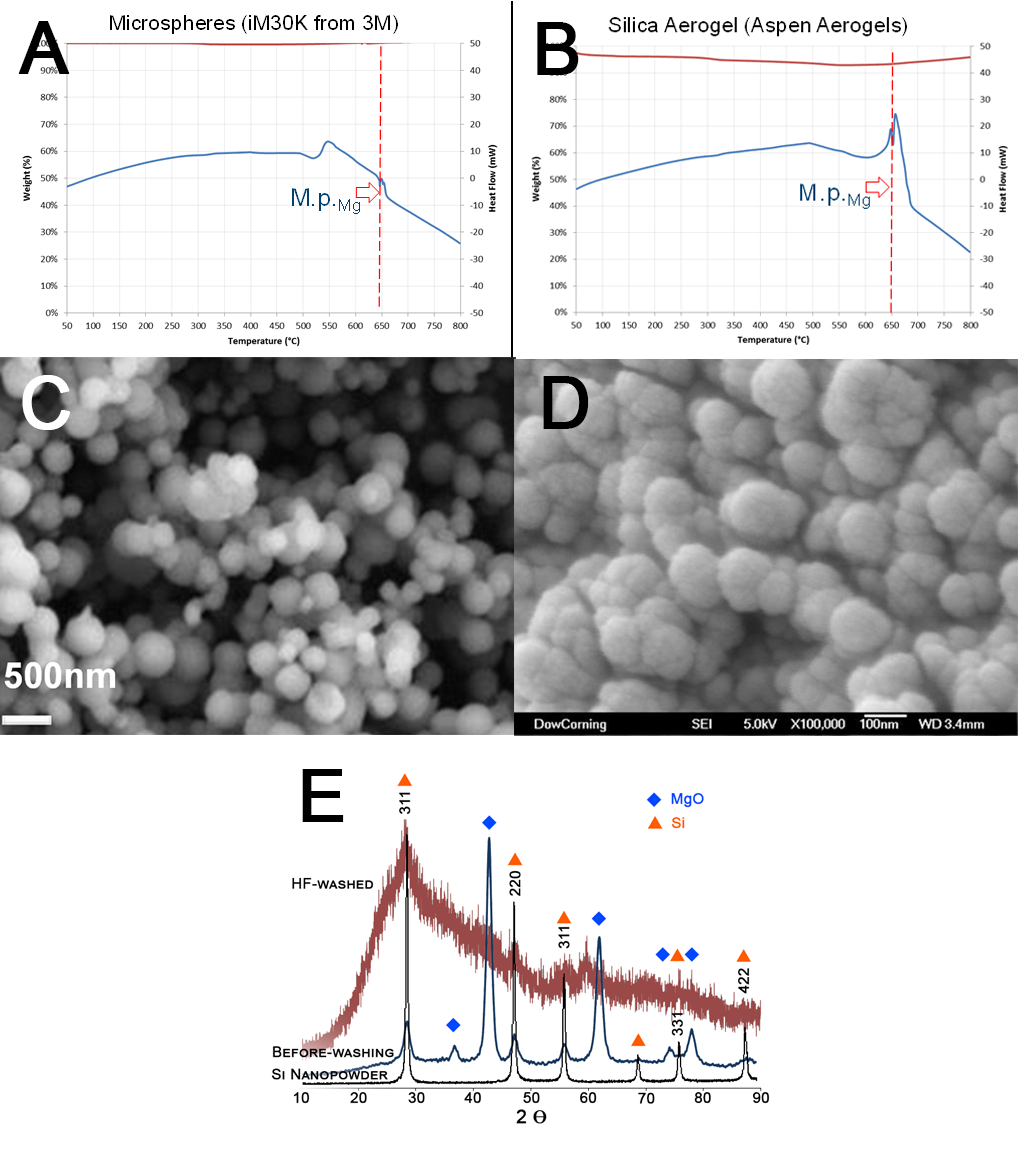