Grand Foyer, Lobby Level (Hilton Orlando Bonnet Creek)
K. Hoeppner (Berlin University of Technology (TU Berlin))
Lithium-ion cell chemistries, with their quite high energy densities, are naturally interesting candidates for the application as buffers in future self-sufficient energy-harvesting microelectronic systems [1, 2]. For these applications, thin film or 3D micro batteries could come into consideration [3, 4], although they might be comparatively expensive. Another promising approach that may limit production cost is the fabrication of micro batteries on a silicon wafer, where a vast number of batteries can be produced in one batch.

Previously we have investigated a concept involving the integration of conventional stacked electrodes and a porous polymer separator in a silicon glass package [5]. In this study, a design with the anode and the cathode lying side by side, separated by a narrow silicon spacer, has been implemented. This design facilitates assembly and encapsulation considerably since no polymer separator is needed and both electrodes can be contacted from downside. Geometry can be adapted to meet balancing requirements for different electrode materials.

The production process for this kind of micro battery has been described in detail elsewhere [6]. Briefly, wet chemical etching of a Si-wafer of {110} crystal orientation is applied to form long and narrow cavities with vertical sidewalls at the long sides and a slope at the front sides. Such geometry ensures a good utilization of area (i.e. high specific capacity) at a high geometric accuracy as well as an easy contacting of the current collectors. The structured substrate is oxidized and passivated against Li-diffusion prior to the deposition of the active materials and the electrolyte by micro dispensing [7]. Finally, the device is almost hermetically sealed by the attachment of a glass lid (fig 1.).

To obtain a high energy density, we have applied graphite as the anode material and nickel cobalt manganese oxide as the cathode material (LixC6 / Liy(Ni1/2Co1/5Mn3/10)O2). The fabricated single cells show a reproducible rate capability and cycling performance during continuous cycling between 4.1 and 3V (fig. 2). Due to the long paths for Li ion movement and the relatively thick electrodes the impedance of such cells is naturally higher as compared to cells with stacked electrodes. However, utilizing the special mechanical properties of silicon as a battery housing material it is possible to further decrease the width of the cavities for the electrodes (wcav) and the separator (wsep) substantially which is expected to result in improved rate capabilities. Furthermore, by fabricating cells with interdigital electrodes and narrow separators it is possible to enlarge the specific capacity per area, tailoring batteries for specific applications.

The fabricated micro batteries have convential (i.e. non-thin-film) electrodes with a thickness in the range of around 50…150 µm. This is interesting for applications where a small volume, high capacity energy supply is needed. Examples are small energy autarkic sensors, e.g. implantable sensors for medical applications [8], or miniaturized sensor networks. Such applications are usually linked to radio modules for transmitting information. We can show that during pulsed discharge the system performance is less influenced by the relatively thick electrodes due to relaxation effects, resulting in higher extractable energies that are several times higher than during continuous discharge of the cells.

The fabricated structures could be used in materials research, e.g. for high-throughput screening and in-operando electrode surface studies by applying different lid materials. 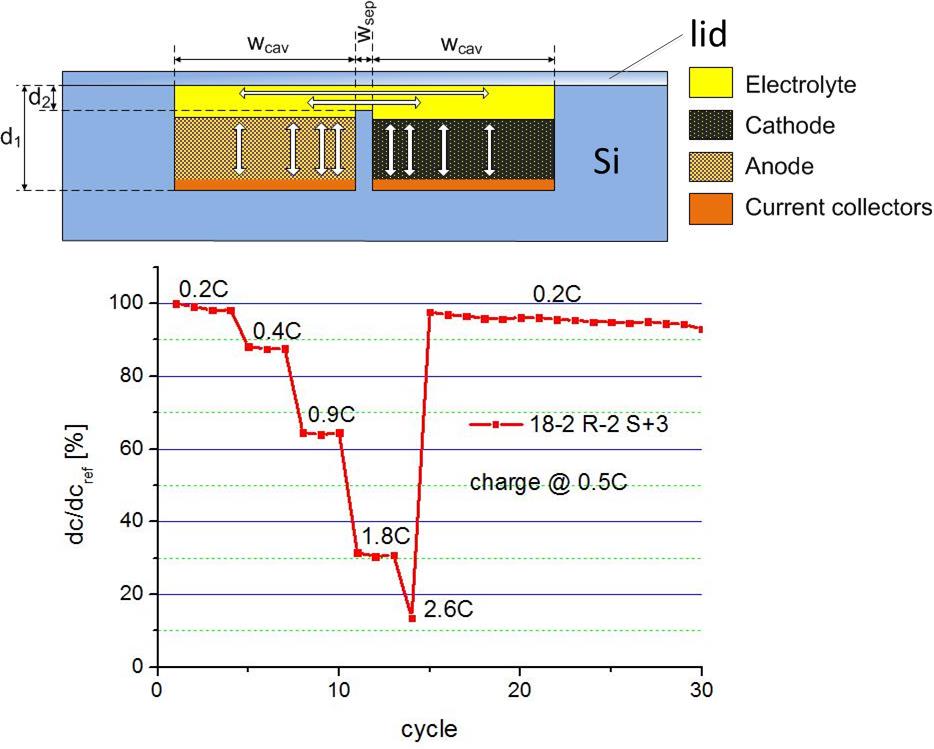