However, the chemical mechanism of carbon oxidation in the molten-carbonate based DCFC is not well understood. It is not clear which factors control the extent of reverse Boudouard reaction, leading to CO rather than CO2production, and thereby decreasing the utilization. An important question is whether or not in the carbonate medium other reactions, electrochemically driven, occur than the well-known solid/gas reaction, Eq. 1.

In previous work in this Institute, Chen et al.[2]investigated the wetting behavior of graphite in molten carbonate, and found that the wetting of a   graphite rod at open circuit in molten carbonate is driven not only by capillary forces, but also by the electric fields associated with corrosion circuits set up between the “dry” and “wetted” parts of the graphite surface. The combined capillary and electrochemical forces control the gradual wetting of the internal and external surface, by micropore-filling and external film formation, respectively.

Further exploring the wetting process, the work reported here, in parallel with a similar project reported in Ref. 3 aimed to evaluate the influence of the reverse Boudouard reaction on DCFC anodic reaction under different temperatures and gas atmospheres.

The principal finding is that the reverse Boudouard reaction, or “carbon corrosion reaction”, in a molten carbonate medium greatly increases the wettability of graphite in molten carbonate. Upon “dry” exposure to a CO2atmosphere (enabling only the reverse Boudouard reaction [1]), the graphite surface corrodes into a stratified structure, which leads to an increase in surface area (Figures 1a and 1b), and thereby enhances the driving force for rapid wetting during subsequent exposure to the melt. During the wetting experiment, gas bubbles were observed which appear to be generated at the solid/liquid interface of the wetting film. Moreover, after the film formation was complete, a thin film of carbon was found to have formed on the graphite surface under the carbonate film. This newly formed carbon is shown in Figure 1d.

To explain these observations, we propose a reaction mechanism which includes, at open circuit, a main anodic reaction of 4-e-carbon oxidation and two cathodic reactions that generate gas bubble and new carbon, respectively, as follows. . We believe that the reverse Boudouard reaction plays an important role in this process.

To confirm this mechanisms, further experiments including the measurement of polarization during wetting are in process. 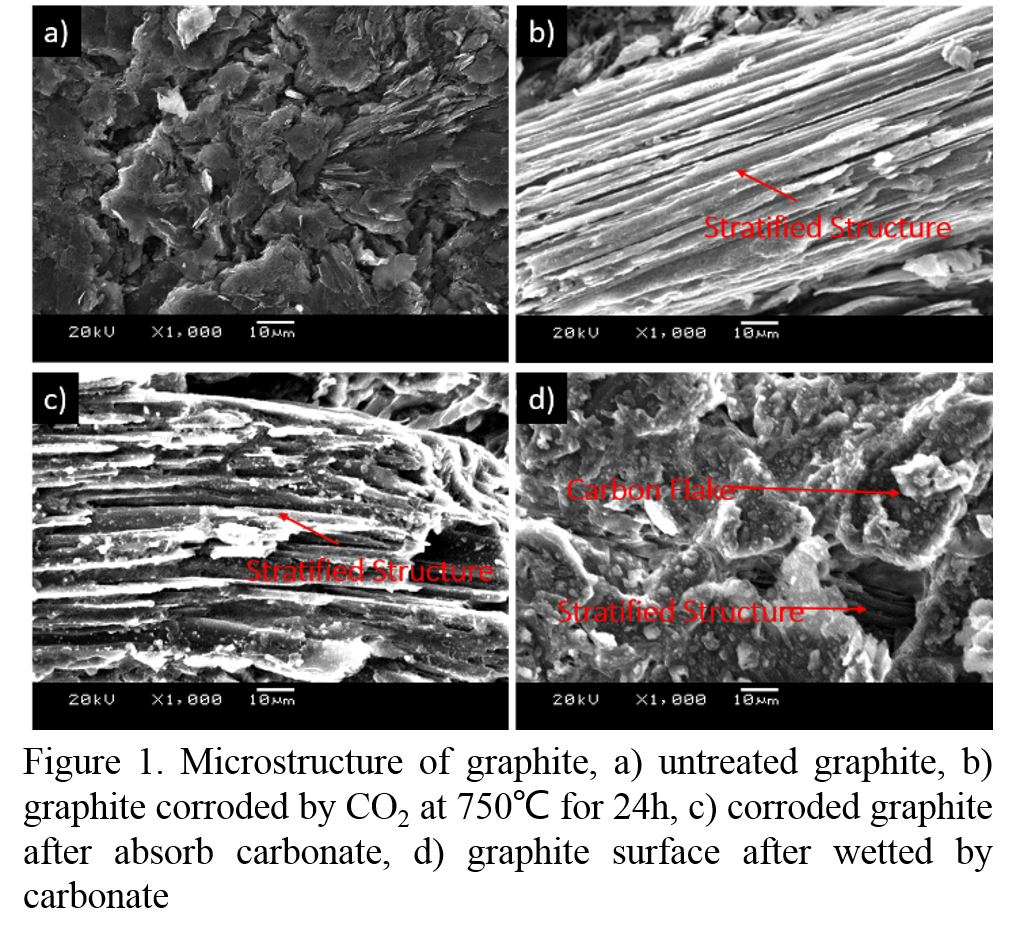