323
Poromechanics of a Lithium-Ion Battery Separator

Bonnet Creek Ballroom IV, Lobby Level (Hilton Orlando Bonnet Creek)
G. Y. Gor (Princeton University), X. Liu (Smith College), J. Cannarella, J. H. Prevost, and C. B. Arnold (Princeton University)
Processes causing battery aging can be both of electrochemical and mechanical nature. The studies of the latter are usually limited to the consideration of the processes in electrodes, particularly on the swelling of the electrodes due to lithium intercalation. However, it has been shown recently that the compression of the separator during the battery operation has significant impact on its performance [1, 2].

In order to understand the mechanical behavior of the separator during the battery operation, it is necessary to study its response to both static and dynamic loading when it is immersed in fluid. Recently Sheidaei et al. [3] and then Avdeev et al. [4] performed the tensile tests of commercial separators showing the difference in the mechanical properties for dry and wet conditions. However, the tensile testing does not represent the loading conditions in a battery. In the battery the loads on a separator are compressive both due to electrode swelling upon lithium intercalation or stacking loads [5].

In the current work we present the results of compressive tests of commercial macroporous polypropylene (PP) separator Celgard 3501 at different strain rates in dry and wet conditions. The experiments were carried out with three different fluids: water, methanol and dimethyl carbonate (DMC) – a common solvent in electrolyte for lithium-ion batteries. Here we focus on the region of small deformation (before yield), and calculate the effective (or ‘apparent’), Young’s modulus, which depends on the strain rate.

The behavior of apparent Young’s modulus in our compression tests is qualitatively different from that of the tensile tests [3, 4]. Particularly we observed the noticeable stiffening of the wet sample at high strain rates (Figure 1). This effect cannot be explained by viscoelastic properties of the polymer, and should be attributed to poroelastic behavior – fluid drainage from the pores [6]. We performed simulations using Dynaflow finite element code [7] and calculated the apparent Young’s modulus corresponding to the experimental conditions. The calculations were done within the linear elastic model for the solid matrix, and gave qualitative agreement between the predicted and experimentally observed moduli (inset in Figure 1). Our current research is focused on including the viscoelasticity in the model in order to achieve the quantitative agreement.

The difference between our results for the apparent Young’s modulus and results derived from the tensile tests [3, 4] shows that the mechanical properties from the tensile tests cannot be employed for modeling the separator in a battery, where the compressive loads take place. The results of our work will be further used in the development of predictive model for studying the coupled mechanics and electrochemistry of lithium-ion batteries. Such model can serve as a tool for optimization the materials and geometric parameters of lithium-ion cells to find a path towards extending their lifecycle.

G.G. would like to thank George Scherer for insightful discussions on poroelasticity. This work was supported by Addy Fund from the Andlinger Center for Energy and the Environment. 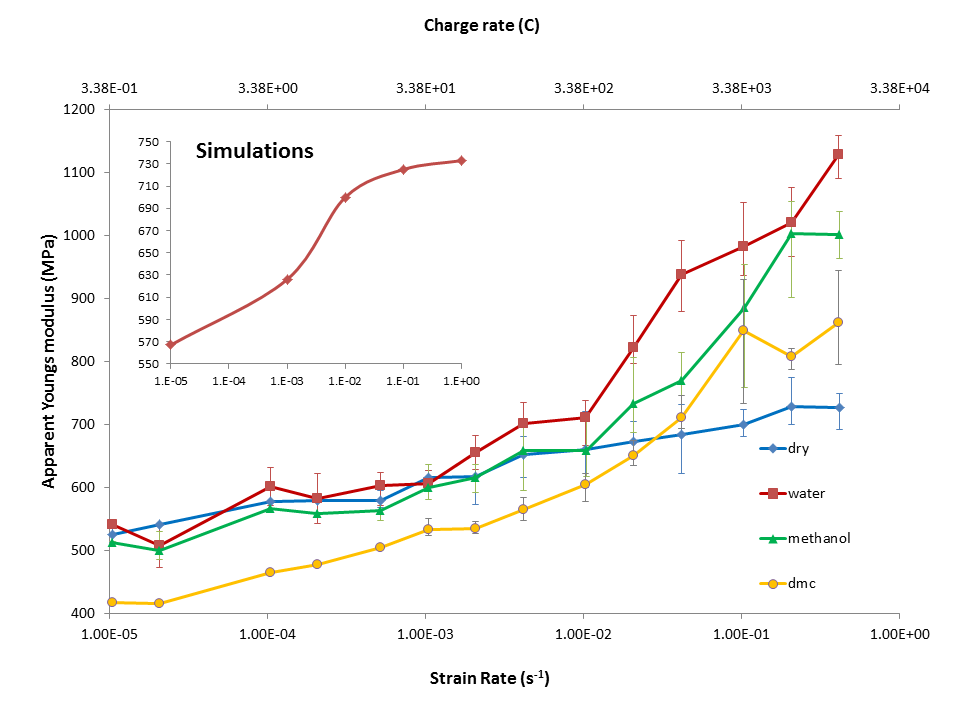