Bonnet Creek Ballroom IV, Lobby Level (Hilton Orlando Bonnet Creek)
Y. Gonoi (Graduate School of Environmental Studies, Tohoku University, Sendai, Japan), Y. Kimura (Graduate School of Environmental Studies, Tohoku University), K. Yashiro (Tohoku University), S. Watanabe (Graduate School of Environmental Studies, Tohoku University), S. I. Hashimoto, and T. Kawada (Tohoku University)
It is well known that oxygen nonstoichiometry is greatly related to thermomechanical properties and electrochemical properties of the oxide materials such as chemical expansion, Young’s modulus, electrical conductivity and so on. Conversely, it implies that oxygen nonstoichiometry might change due to applied mechanical stress. We have confirmed this phenomenon in our previous study [1]. In other words, it may be possible that material properties could be controlled by mechanical stress. In this study, we aimed to evaluate the relations between mechanical stress and oxygen potential change quantitatively by electromotive force measurement under compressive stress using a YSZ ball.

Oxygen concentration cell was equipped with a high-temperature mechanical testing machine to measure electromotive force of the sample under mechanical stress. Oxygen potential of the sample surface could be estimated from measured electromotive force by Nernst equation. A YSZ ball was worked as both an electrolyte and ball indenter. Pt wire was wound around the YSZ ball as a reference electrode. The samples were sintered pellets of La0.6Sr0.4CoO3-δ and La0.6Sr0.4FeO3-δ, which were worked as a working electrode.

Fig. 1 shows electromotive force, E, and load, P, of La0.6Sr0.4CoO3-δ as a function of time, t, at 1073 K in air. E changed to negative direction when P was applied (t=60 s). During loading, E gradually increased and went back to the original state. When the P was released (t=150 s), E changed to positive direction. After that, E slowly decreased and went back to the original state. According to Kuhn et al., with increasing p(O2), δ in La0.6Sr0.4CoO3-δ decreased, and correspondingly the lattice constants decreased [2]. That is the partial oxidation of La0.6Sr0.4CoO3-δ induced by the shrinkage of the lattice volume. Therefore, it is expected that δ decreases with mechanical lattice shrinkage. However, it would take a certain time until reaching to equilibrated δ with gas atmosphere because of chemical diffusion process. Thus, at the onset of loading, La0.6Sr0.4CoO3-δ was reduced compared with that of equilibrium with gas phase. Over time, E slowly went back to the original state because of chemical diffusion. On the other hand, when the P was released, oxygen potential changed vice versa. The maximum value of the measured electromotive force change increased with increasing the load. This means that larger stress leaded to larger oxygen potential change. Values of electromotive force changes were similar to those from theoretical calculation using Maxwell relations. The higher the temperature, the shorter the time required for relaxation of E. This corresponds to the relaxation time of chemical diffusion, which becomes shorter at high temperature. The calculated relaxation time of E were also showed same temperature dependence. That is, the relaxation of emf is confirmed to be that of chemical diffusion.These electromotive force behaviors were observed in La0.6Sr0.4CoO3-δ and La0.6Sr0.4FeO3-δ in high p(O2) region.

This work was carried out by Grant-in-Aid for Scientific Research (24656375) and JST-PREST. 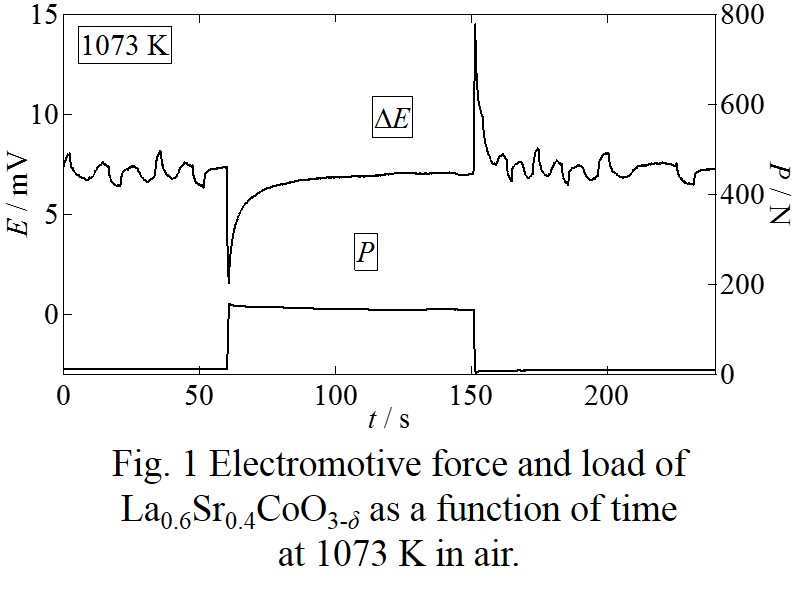