944
Effects of Chloride on the Oxygen Reduction Reaction

Floridian Ballroom F, Lobby Level (Hilton Orlando Bonnet Creek)
A. J. J. Jebaraj and D. Scherson (Case Western Reserve University)
The oxygen reduction reaction (ORR) represents perhaps the best studied redox process in electrocatalysis because of its key role in fuel cells1 and, more recently, metal-air batteries2. As is well known, the problems associated with improving the performance of low and intermediate temperature fuel cells are associated with the lack of suitable catalysts that can reduce the overpotential for the ORR. This multi-electron transfer process has been found to be highly sensitive not only to the detailed electrocatalyst microstructure, but also to the presence of adsorbed species on the surface. Particularly significant are the deleterious effects derived from the adsorption of trace amounts of ionic3,4 and molecular species5. In particular, trace amounts of halides can poison the four-electron reduction of dioxygen, promoting instead, the two-electron reduction to peroxide. This work describes a new approach toward investigating the effect of adsorbed chloride on the ORR on polycrystalline Pt in 0.1 M HClO4 using a rotating ring-disk electrode coupled with transient techniques.
EXPERIMENTAL
Measurements were performed in a conventional all-glass, three-compartment electrochemical cell with a rotating Pt ring- Pt disk electrode, Pt|Pt RRDE, (Pine Instruments, (A = 0.164 cm2) using a bipotentiostat (Pine Instruments). A Pt foil and a reversible hydrogen electrode in the same solution (RHE) were used as counter and reference electrodes, respectively. Oxygen reduction polarization curves were recorded in oxygen saturated 0.1 M HClO4.

RESULTS AND DISCUSSION
Shown in the top panel, Fig.1 are polarization curves recorded at a scan rate, ν = 20 mV/s for a Pt disk electrode in oxygen saturated 0.1 M HClO4in the absence (black curve) and in the presence of 20 μM (red curve) and 100 μM NaCl (blue curve). The corresponding currents, measured with the ring polarized at a potential positive enough to detect hydrogen peroxide oxidation under diffusion limited conditions (ca. 1.2 V) are shown in the bottom panel in this figure. As evident from these results, the presence of chloride in the electrolyte leads not only to a significant shift in the onset of oxygen reduction, but also to the generation of hydrogen peroxide. Particularly interesting is the peak-like feature observed in the ring current as a function of the disk potential. Correlations between the chloride coverage and the ORR rate were sought by implementing a method in which the potential was stepped from 0.05 V, a value at which there is no chloride adsorption, to various more positive potentials where chloride adsorption is known to ensue in solutions devoid of oxygen. The results of these experiments, shown in Panel A, Fig. 2, indicate that for certain potentials, the current attains a limiting value associated with the diffusion controlled adsorption of chloride and later decays down to zero signaling that the equilibrium coverage at that potential was reached. Additional insight into this phenomenon was obtained from theoretical simulations performed within the COMSOL platform by coupling the convective diffusion equation with the surface dynamics for the adsorption|desorption process. This strategy yielded transient curves (see Panel B, Fig. 2) which strongly resemble those found experimentally. Efforts are now underway to explore whether a more detailed analysis of the curves will afford reliable values of the kinetic parameters involved.

ACKNOWLEDGEMENTS
This work was supported by a grant from NSF.

Fig. 1. Polarization curves recorded at a scan rate,  ν = 20 mV/s for a Pt disk electrode  in oxygen saturated 0.1 M HClO4 in the absence (black) and in the presence of 20 μM (red) or 100 μM (blue) NaCl. The corresponding ring currents recorded when the ring was polarized at Ering= 1.2 V are shown in the lower panel.

Fig. 2. Panel A: Chronoamperometric curves recorded in 0.1 M HClO4 with 20μM NaCl at a rotation rate of ɷ= 400 rpm starting from Eini=0.05 V to the various final potentials as indicated in the legend. Panel B: Simulated currents for kads/kdes =106/M, 900 rpm, C0=.1mM, Γmax=2x10-9mol/cm2 and for various values for the adsorption rate (legend).  Limiting current is consistent with Levich equation. 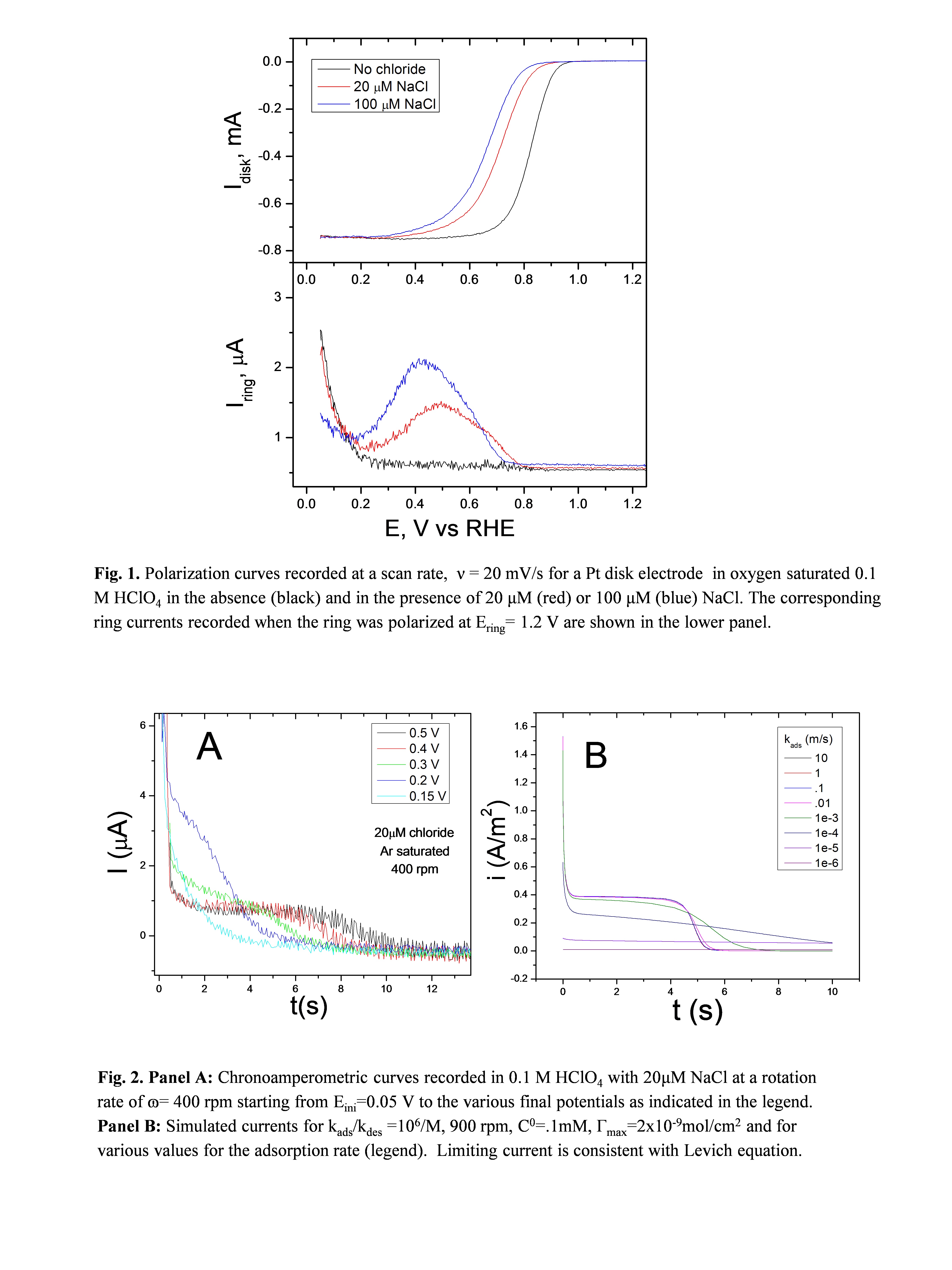