357
Domain Reorientations and Its Influence on Mechanical Properties of La0.6Sr0.4Co0.2Fe0.8O3-δ

Bonnet Creek Ballroom IV, Lobby Level (Hilton Orlando Bonnet Creek)
Y. Kimura (Graduate School of Environmental Studies, Tohoku University), K. Yashiro, S. I. Hashimoto, K. Amezawa, and T. Kawada (Tohoku University)
Mechanical degradations in solid oxide fuel cells (SOFCs) are one of the issues to be solved for their full scale commercialization. In order to suppress the mechanical degradation, the mechanical properties of SOFC components should be correctly understood. Elastic modulus of La1-xSrxCo1-yFeyO3-δ (LSCF), which is a typical cathode material, is found to drastically decrease with increasing temperature in the rhombohedral phase [1]. One possible cause of the drastic decrease is domain reorientation. The rhombohedral LSCF can have four different domain states in the rhombohedral phase [2]. When the material is exposed to a mechanical stress, domains start to reorient [2, 3]. Such domain reorientation relaxes the mechanical stress and can cause the enormous decrease in the elastic modulus. In this study, the dynamic elastic modulus of rhombohedral La0.6Sr0.4Co0.2Fe0.8O3-δ (LSCF6428) at a range of frequencies was evaluated by a dynamic mechanical analysis (DMA) in a wide frequency range in order to understand the influence of domain reorientation.

The sample were made from powders obtained from AGC Seimi Chemical Co., Ltd.. The samples were sintered at 1573 K for 6 hours and then cut into rectangles and polished with a diamond paste. Relative densities of the rectangles were over 95%. The dynamic Young’s modulus and internal friction of LSCF6428 were evaluated by DMA in 3-point bending geometry. The measurement was performed in 100% N2 with changing the temperature from room temperature to 773 K and frequency from 0.01 to 100 Hz.

Fig. 1. Dynamic Young’s modulus and internal friction of LSCF6428 as a function of temperature at a range of frequencies. 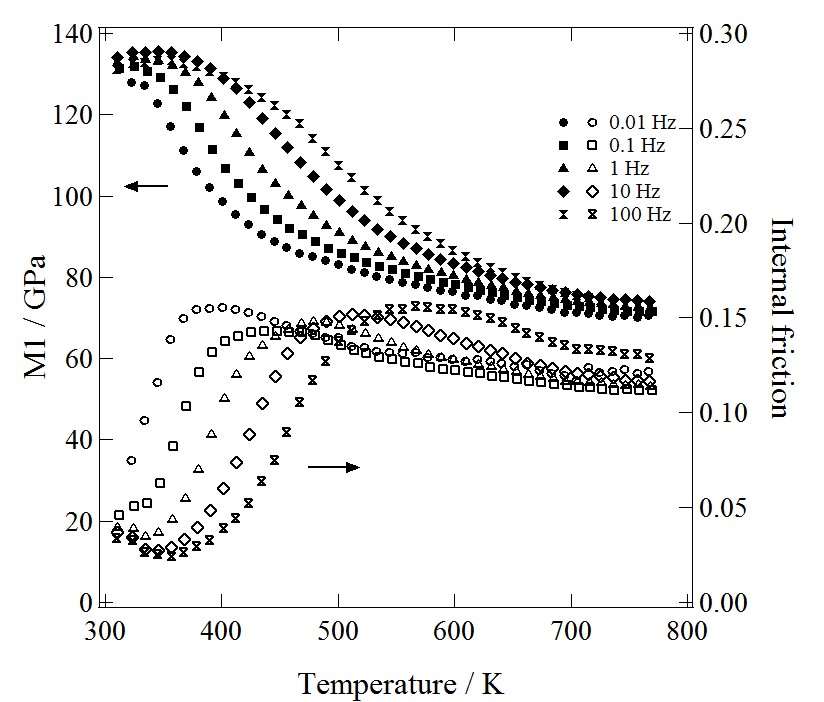