The animal was induced to walk normally by a light tap to the body.  Once the measurements were completed, the tether was removed from the suspension mount above the ball and the animal showed completely normal walking when released onto the floor surface, both with and without the circuit board still attached.

Wireless Communication Testing – Prior to the in vivo tests the biofuel cell electrodes were immersed in a non-deaerated 30 mM trehalose solution and connected to the oscillator. A clearly audible signal could be heard by placing the receiver close to the oscillator, which became more intense as the separation between oscillator and receiver was decreased. As expected, no signal could be heard upon removing one of the electrodes from the solution (vide infra).  The same protocol was employed for in vivo measurements involving both cockroaches and mothsfor which video-audio footage was recorded on a Sony DCR-HC21 MiniDV camera, and later played back allowing the frequency to be analyzed using Spectrum Lab V2.77b22 software.

The ability of the fuel cell implanted in a live and moving insect to power the oscillator mounted on its body was demonstrated by bringing the receiver near to a tethered cockroach walking on a suspended Styrofoam ball as shown in Fig. 2, yielding an audible signal for distances of less than about 2 cm from the insect. More detailed tests were performed while the cockroach was restrained on the bench by methods specified elsewhere.6

The results of this investigation have shown that judicious design of the electronic circuitry allows for a single biofuel cell implanted in either B. discoidalis cockroaches  or M. sexta moths to power continuously an oscillator capable of transmitting signals wirelessly to an external receiver. This is in stark contrast with work published in the literature in which two or more living organisms, either lobsters10 or cockroaches,11 connected in series, were required to generate sufficient biofuel cell derived power to drive an electronic circuit. Although the weight and volume of the circuit board involved in our studies was found to be small enough to allow B. discoidalis to move freely, it was too heavy for the moth to carry it in flight. We estimate, however, that a telemetry pack based on a custom integrated circuit with power conditioning similar to12 and optimized packaging (flip-chip bonding, etc.) would be about 15 mm2 by 1 mm thick, with a mass less than 0.1 gram.

One could in principle convert the biofuel cell data to gravimetric type units by dividing the power by the weight of the electrode which would indeed give very attractive values, given the very light weight of the polymer-enzyme layer. In fact, it seems feasible to use the cuticle of certain insects as the electrode support which would avoid adding extra weight. Yet another factor that would improve the performance metrics would entail changes in the overall architecture of the enzymatic cathode involving structures that resemble air permeable electrodes13 for conventional fuel cells. Efforts in this direction are being pursued in several laboratories including ours. Perhaps the most challenging aspect of biofuel cells relates to the long term stability of the enzymes themselves. A strategy that could prove promising is the search of enzymes of the type in extremophiles.

Figure 1. Photographs of Blaberus discoidalis(A), the transmitter circuit (B) and of a quarter coin (C) to compare the scales involved.

Figure 2. Frame captured from a movie filmed during experiments in which a biofuel cell was implanted into a tethered Blaberus discoidaliscarrying the transmitter electronics and walking on a floating sir suspended Styrofoam sphere. The external receiver was placed about 1.5 cm away from the transmitter. The insert shows the same insect untethered, walking normally on the laboratory floor with the implanted fuel cell and electronics after the experiments were completed. 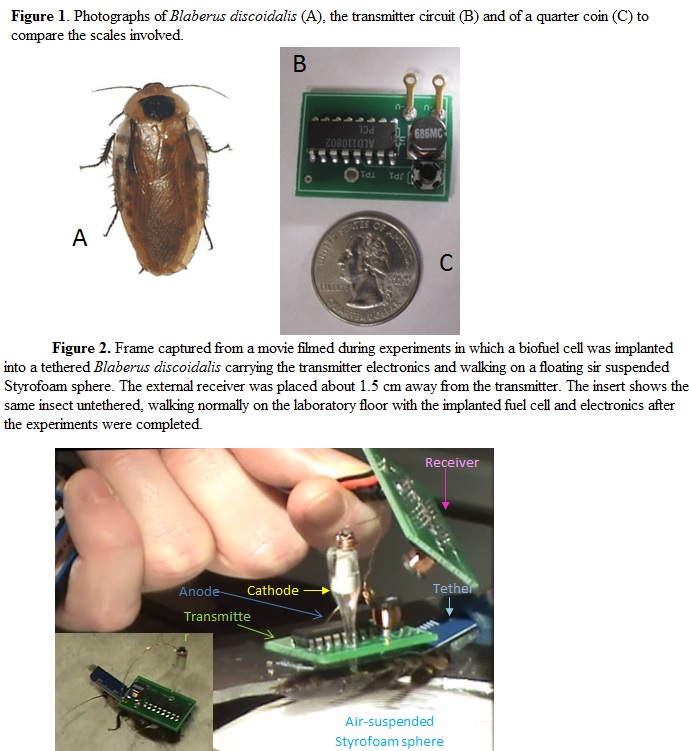