Ionic liquid (IL) is a liquid salt consisting of cation and anion at or below room temperature and has interesting features, e.g., negligible vapor pressure, wide liquidus temperature range, wide electrochemical window, and relatively-high ionic conductivity. The features can be controlled by a combination of cation and anion. Common cationic main-components for ILs are imidazolium, quaternary ammonium, pyridinium, pyrrolidinium, piperidinium, sulfonium, and phosphonium1). But, there are not many choices of anions. Typically, AlCl4−, BF4−, PF6−, CF3SO3−, N(SO2CF3)2−, etc are used as the anion component1). In this research, we designed the new family of aromatic trifluoroborate anions ([Ar-BF3]− (Fig. 1)), which can be easily synthesized and to which various substituents can be introduced, so as to prepare the ILs having [Ar-BF3]−. Physicochemical properties of the prepared ILs were also examined.

ILs employed in this study were synthesized by a metathesis reaction in anhydrous organic solvents with onium halide and K[Ar-BF3] prepared by a reported procedure2). After the reaction, crude products were extracted by CH2Cl2 and purified by rinsing with ultrapure water several times to remove the residual onium halide and by-product. The resulting products were dried at 373 K under vacuum condition for 12 hrs and confirmed by 1H NMR, mass spectrometry, and elemental analysis. Physicochemical properties of the obtained ILs were measured in an argon-gas-filled glove box (O2, H2O < 1 ppm) or airtight cells. Thermogravimetry-differential thermal analysis (TG-DTA) and differential scanning calorimetry (DSC) was carried out by using aluminum pan without and with aluminum top for TG-DTA and DSC, respectively.

ILs in this study were prepared from 1-butyl-3-methylimidazolium chloride ([C4mim]Cl) and potassium phenyltrifluoroborate (K[PhBF3]) or potassium (monomethoxyphenyl)trifluoroborate (K[OMeC6H4BF3]). As to K[OMeC6H4BF3], we were able to synthesize three types of salts with methoxy group at ortho, meta or para position on the aromatic ring. All the ILs exhibited a liquid state at ambient temperatures (298 K) while most salts with a bulky ion pair become solid or highly viscous liquid at room temperature3). Thermal properties such as melting point, glass-transition temperature, and thermal degradation temperature for the ILs are summarized in Table 1. The ILs showed a modest thermal stability over 500 K. We could estimate a glass-transition temperature but not the case with a melting point. The viscosity and the ionic conductivity of the obtained ILs at room temperature are also given in Table 1. Interestingly, the ILs exhibited a relatively favorable viscosity and ionic conductivity. Figure 2 indicates Arrhenius plots of the viscosity and the ionic conductivity for the obtained ILs. Each [C4mim][OMeC6H4BF3] ILs had the higher viscosity and the lower ionic conductivity than that of [C4mim][PhBF3] without the methoxy group. Among the [C4mim][OMeC6H4BF3] ILs, the ionic conductivity increased in the order corresponding to ortho, para and meta substitute. It was noteworthy that the difference in the substitution site had an influence on the physicochemical properties. We investigated the effect of the bonding position of methoxy group on the interionic interaction using MP2/6-311G(d,p) level calculation. According to the calculation, the interionic interaction energies between [C4mim]+ and [OMePhBF3]− increased in the order to ortho, para, and meta, suggesting theoretically that the lone pair on the methoxy group is donated to the carbon with BF3 group by the resonance effect and the negative charge of BF3 is increased when the methoxy group bonds to the phenyl ring of [PhBF3] at ortho or para position. Under such condition, the fluidity, i.e., ion mobility, should be restricted because of the interionic interaction enhanced by the high negative charge of BF3. On the other hand, [C4mim][m-OMePhBF3] does not have the resonance effect on the carbon with BF3. Thus, the ion mobility of the [C4mim][m-OMePhBF3] becomes easier than the other two ILs, [C4mim][o-OMePhBF3] and [C4mim][p-OMePhBF3]. 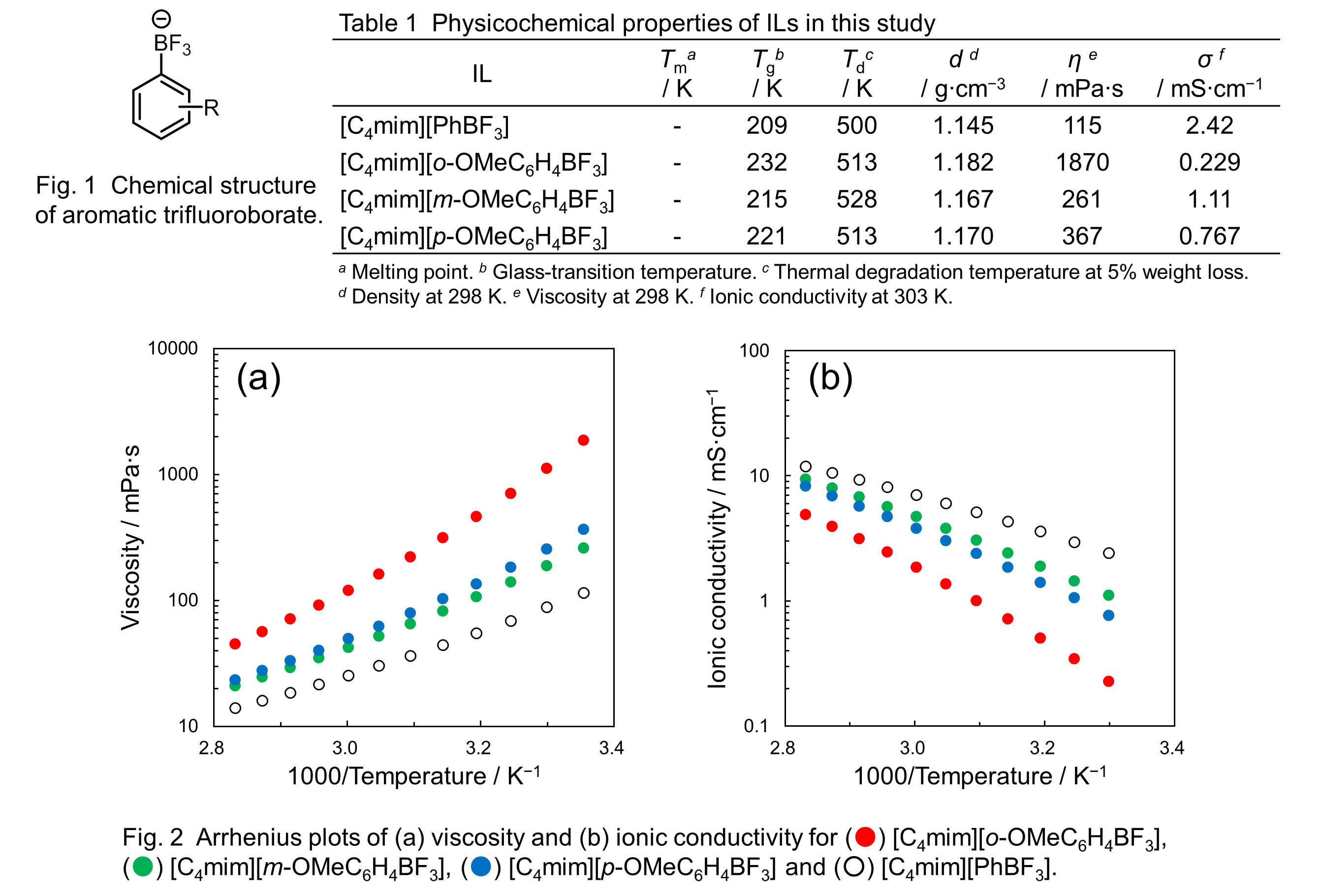