Expo Center, 1st Floor, Center and Right Foyers (Moon Palace Resort)
S. A. Kochetova, A. D. Pisanenko, and S. V. Devyatkin (Institute of General and Inorganic Chemistry)
Nickel silicides are used as Schottky barrier and as ohmic contacts owing to the combination of properties typical of metal (high electrical conductivity) and nonmetal (low heat conductivity) [1]. Nickel silicides are usually produced by the thermal vacuum spraying of nickel on single-crystalline silicon plates [2]. The objective of this work was to examine the possibility of obtaining nickel silicides by electrolysis of molten salts, containing silicon ions, on a Ni cathode. It can be concluded from thermodynamic calculation that silicon discharge depolarization through NiSi2 formation is 0.110 V at 993K:

The electrochemical behaviour of the system NaCl-NaF-K2SiF6 was studied by cyclic voltammetry. A glassy carbon crucible served as a vessel for the melt and as an auxiliary electrode; a Ni wire was used as the working electrode; the measurements were made with respect to glassy carbon reference electrode 7200С in argon atmosphere. Current-potential curves exhibited, at potentials more positive  (~100 mV) than silicon discharge potential, a new irreversible electrochemical process followed by a chemical reaction. Up to 25 mm thick dense NiSi2 layers have been obtained by the electrolysis of a NaCl-NaF-K2SiF6 melt on a Ni plate at 7200С in argon atmosphere at current density of 50 mA/cm2 (Fig. 1.), which was confirmed by X-ray phase analysis. The chemical composition map of metallographic section shows the silicon distributions.

On the base of thermodynamic calculation, voltammetric investigation and electrolysis experiments, it has been show that nickel disilicides can by electrochemical synthesized in a NaCl-NaF-K2SiF6 melt at 7200С on a nickel cathode in argon atmosphere. 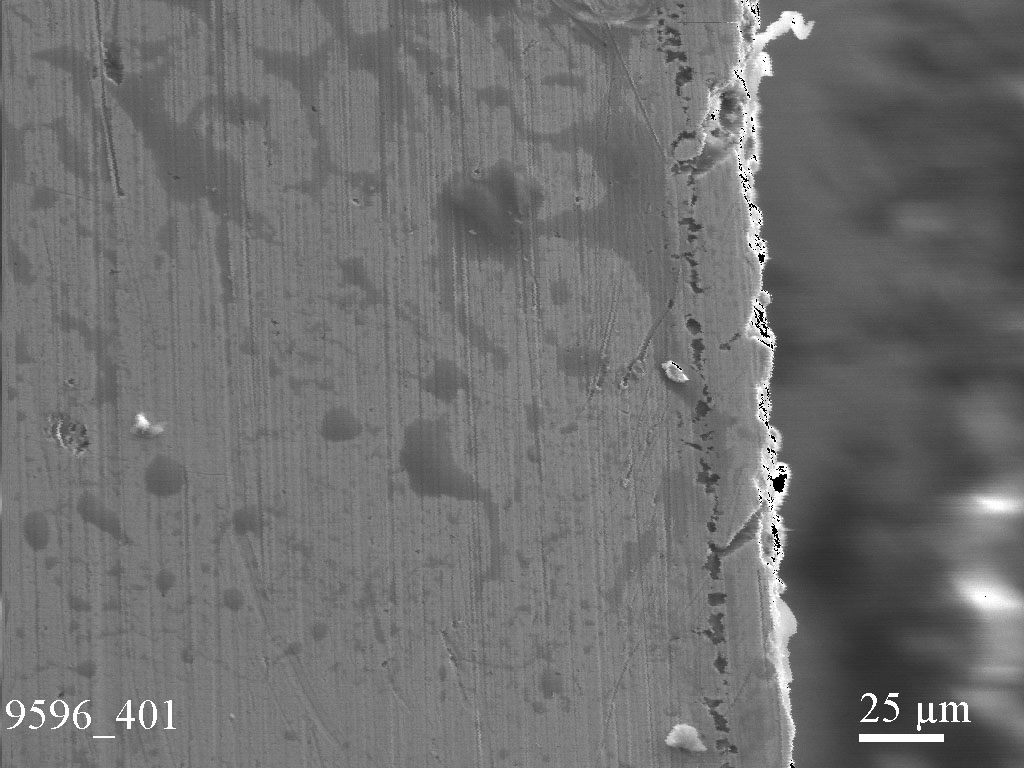