Cycle life test methods for batteries used in electric vehicles (EVs) have been proposed by several organizations, e.g., the International Organization for Standardization (ISO), the International Electrotechnical Commission (IEC), and the Society of Automotive Engineers (SAE). In China, national industry standards (QC/T) including standards covering the test procedure for evaluating cycle life of batteries used in EVs have been established. However, there are few published results concerning evaluations of battery life using these standard test methods, and their adequacy remains uncertain. In this study, three types of cycle life tests were applied to high-capacity lithium-ion cells at 45°C. The degradation phenomena caused by each test method were evaluated, and their features and issues were considered.

A commercial 40Ah class lithium-ion cell composed of a LiFePO4cathode and a graphite anode was used in this study. The cycle life of the cell was evaluated by three types of standard test methods, IEC62660-1 [1] and two types of QC/T (constant current and dynamic current profile, denoted as QC/T-1 and QC/T-2, respectively) at 45°C.

In QC/T-1, the cell was discharged at a constant current of 1 C to the lower voltage limit after fully charging. The cell performance was evaluated every 100 cycles. The procedure for QC/T-2 was somewhat more complex. The cell was discharged following the dynamic current profile (Fig. 2) until the state of charge (SOC) reached 20% and then charged at 1/3C in CC-CV mode to the upper voltage limit. This procedure was repeated four times; the expended time was defined as x h. Then, the cell was stored for 24 − x h at 100% SOC. The value of x depends on cell specifications; in this study, x was approximately 4 h. The entire procedure described above was repeated. The cell performance was evaluated at monthly intervals following IEC standards.

The cycle life test was conducted for approximately 6 months, and the capacity retention results for three types of standard cycle life tests were compared. Three cells were evaluated by all three standard methods; average results are shown in Fig. 3. Cumulative discharge capacity was used as the horizontal axis to compare the results obtained from different cycle conditions. An equivalent cycle number, which was defined as the ratio of cumulative discharge capacity to the initial capacity, was added to the second horizontal axis to indicate cycle number.

Rapid capacity decay was observed for QC/T-1 compared to IEC 62660-1 and QC/T-2. Similar results were obtained for internal resistance. Even though the maximum value of the C-rate in QC/T-1 is lower than other methods, the average was highest (Table 1). A high C-rate condition is thought to induce increased cell temperature and deformation of the crystal structure of electrode active materials. These phenomena can cause rapid degradation in QC/T-1. From the perspective of SOC, QC/T-2 has longer duration under high SOC conditions; however, capacity decay in QC/T-2 was not severe compared to other methods. The cathode potential of the cell used in this study is lower than other types of cathode materials, e.g., spinel-type lithium manganate or layered transition metal oxides. The low cathode potential is thought to weaken the impact on degradation under high SOC conditions. Other types of lithium-ion batteries have also been evaluated, and the results will be reported at the conference. 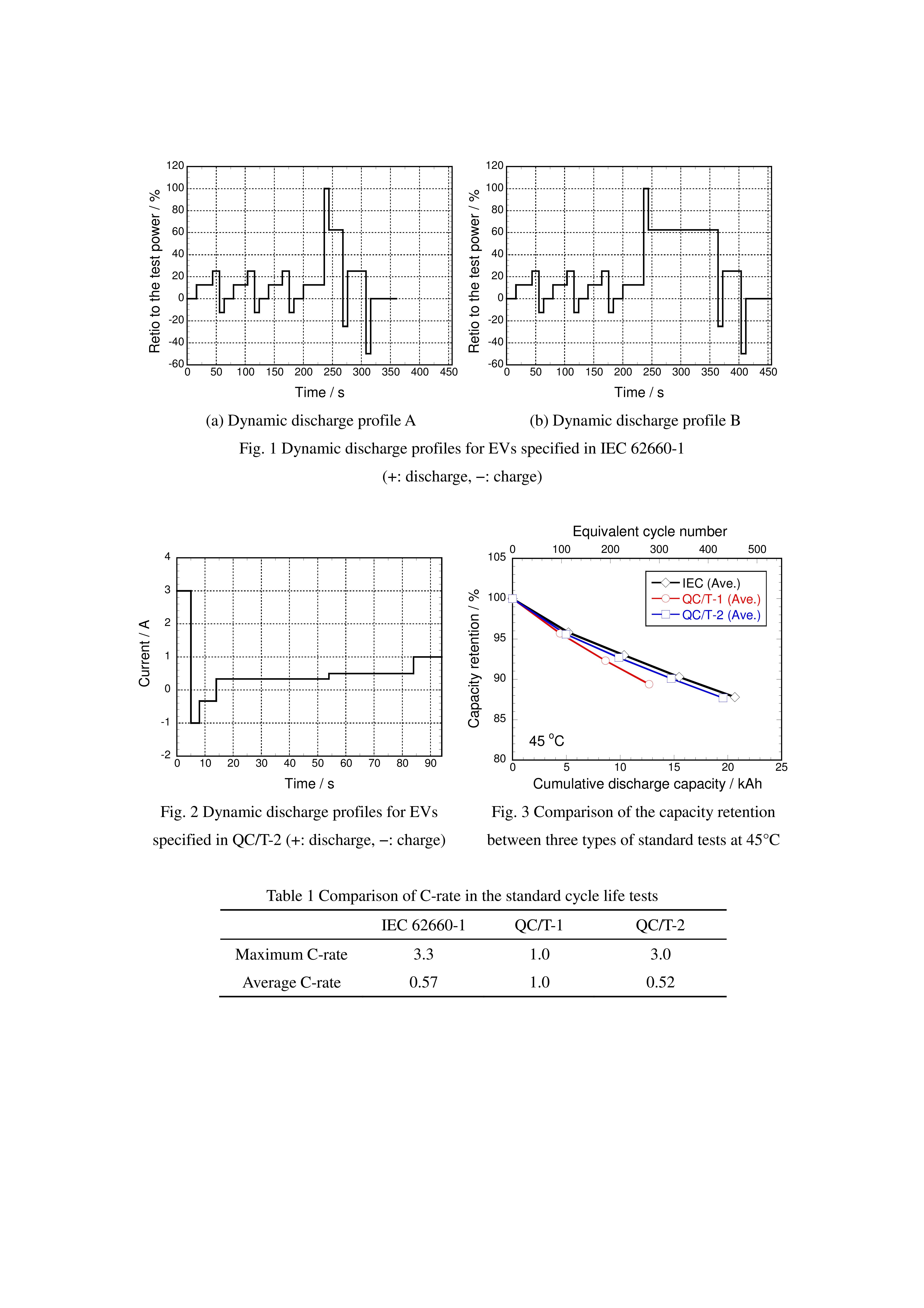