In last few decades, lithium transition-metal oxides with layered structures, such as Li(Ni,Mn)O2 and Li(Mn,Ni,Co)O2, have drawn much attention as a cathode material for the lithium-ion battery. Electrochemical properties of these oxides are supposed to be affected by the local cation configurations in the crystals, and thus the local structures have been studied actively by various methods, like NMR, extended X-ray absorption fine structure (EXAFS) technique and pair distribution function (PDF) fitting.

In this study, we perform the Reverse Monte Carlo (RMC) modelling using the Bragg reflections and total scatterings simultaneously for an analysis on atomic configurations of crystalline lithium transition-metal oxides. Based on the result, we try to determine average (periodic) and local (non-periodic) atomic configurations at the same time.

In this work, a lithium transition-metal oxide LiNi0.5Mn0.5O2 was synthesized. The sample was identified preliminarily by laboratorial X-ray diffraction measurement, and the metal composition was evaluated by the inductively-coupled plasma (ICP) technique. Neutron total scattering pattern of the sample was recorded with HIPPO installed at LANSCE, USA. From the pattern, the normalized reciprocal space data, F(Q), and the real space data, G(r), were obtained. By using these data and the neutron Bragg reflections, we performed the RMC modelling with RMCProfile. A rhombohedral simulation box of 2400 atoms, Li600Ni300Mn300O1200, was used in the modelling, and then the atomic configuration was simulated.

From laboratorial X-ray diffractions, it was confirmed that the LiNi0.5Mn0.5O2 had the layered rock-salt structure (space group: R-3m). The ICP analysis demonstrated that the analytical molar ratio of Li and the transition-metal ions was in good agreement with the nominal composition.

For the sample, we measured neutron total scattering pattern and then performed the RMC simulation using the Bragg reflection, F(Q) and G(r). In the analysis, F(Q) was degraded by convolution in order to take the finite cell size into account, which is denoted as Fconv.(Q) in this work. Fig. 1 shows the RMC simulation result for the Fconv.(Q). as an example. This result demonstrates that the RMC simulation was successfully carried out by using the data set mentioned above. Fig. 2 shows partial radial distribution functions, g(r), of Li-O, Ni-O and Mn-O. It is found that average bond distances of Ni-O and Li-O are the same essentially, but that of Mn-O is shorter than the others. This tendency can be explained well by differences in the ionic radii of Li+, Ni2+ and Mn4+ with 6-fold coordination. From distribution of the bond angles, it is suggested that Ni and Mn forms a local ordering in the transition-metal layer. 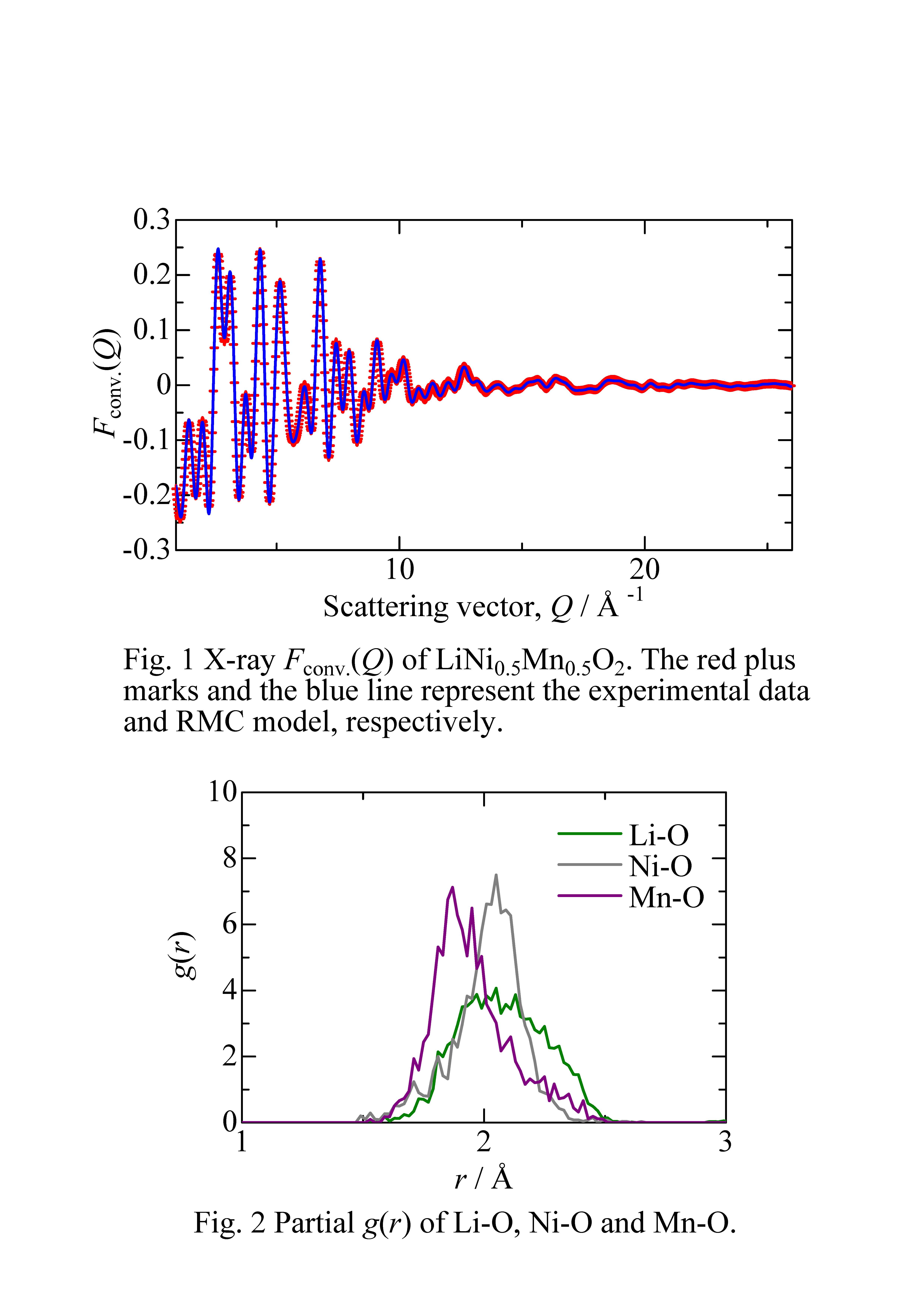