Sunrise, 2nd Floor, Galactic Ballroom 1 (Moon Palace Resort)
I. Nitta, S. Nakanishi, H. Nishikoori, and H. Iba (Battery Research Division, Toyota Motor Corporation)
Metal-air batteries have attracted much attention as a promising energy storage system because of their extremely high theoretical energy density. It may also offer the attractive opportunity to utilize inexpensive and environmentally friendly materials. However, it is still hard to meet the high demands such as cycle life or energy efficiency required for electrified transportations like EVs, and needed further understanding of battery science as well as many breakthroughs in material design and system integration.

The oxygen reduction reaction (ORR), which proceeds on the air cathode, is believed to be largely responsible for determining the performance of the battery because ORR is intrinsically a demanding reaction due to the sluggish kinetics and slow mass transport process. However, there is still little systematic understanding of what role surface chemistry determines the electron transfer kinetics especially in alkaline media.

In this study, mixed metal oxides such as Perovskites and Spinels were prepared with various synthetic concepts and their structural and electrochemical characteristics were investigated. It was found that some Perovskite catalysts prepared by citric acid method show even superior activity than that of Platinum group metal catalyst (Fig. 1). We attribute this excellent ORR activity of the metal oxide-based electrodes to the intimate contact and the specific interaction between metal oxide catalysts and carbon supports which facilitate the efficient electron transfer to adsorbed intermediate peroxide species. This process consequently leads serial reduction of intermediate species to hydroxide, thus the overall process could be viewed as an apparent 4 electrons reduction reaction. It was also found that the facility of ORR was highly dependent on the choice of B site element in Perovskite and the geometrical design of the air electrode tuned by slurry preparation and coating processes.

The performance of full cell was evaluated with the air cathode consisted of the Perovskite catalyst and carbon support, various anodes such as originally developed metal hydride and the third electrode specifically used for the oxygen evolution reaction. The battery shows a promising rate capability and capacity retention for extensive cycling test. 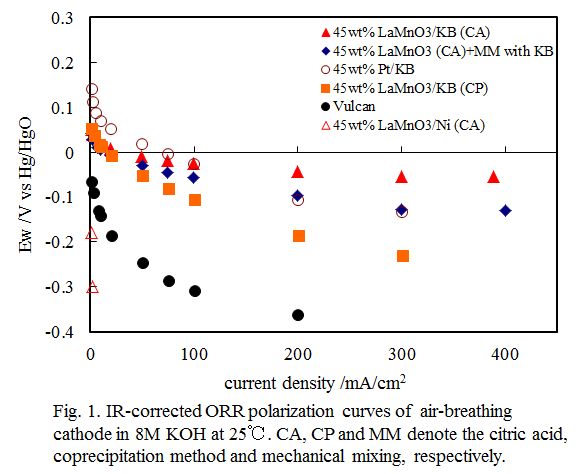