Sunrise, 2nd Floor, Galactic Ballroom 1 (Moon Palace Resort)
P. Hosseini Benhangi (UBC), E. Gyenge (Department of Chemical and Biological Engineering, The University of British Columbia), and A. Alfantazi (Department of Materials Engineering, The University of British Columbia,)
Extensive research has been undertaken to make intermittent clean and renewable energy sources more reliable. Bifunctional oxygen cathodes which can catalyze both ORR (oxygen reduction reaction) and OER (oxygen evolution reaction) are the backbone of rechargeable metal-air batteries as well as regenerative fuel cells [1-3]. Although noble metal family elements and alloys such as Pt , Pt-Au  and Pt-Co  are known as the best catalysts for ORR in alkaline media, their poor electrocatalytic activity toward OER  as well as high price, comparing to non-PGM (non-precious group metal) compounds, limit their usage as a cost effective and active catalyst in bifunctional oxygen cathodes [2, 4]. Manganese oxides have been vastly employed as a robust cost-effective multifunctional and environmental friendly electrode material in battery industry, from primary to rechargeable metal-air batteries, as well as alkaline fuel cells and capacitors [3]. The electrolytic manganese dioxide (γ-MnO2) is known as the most electrochemically active crystallographic form of MnO2 for ORR in alkaline media with tafel slope of 40 mV dec-1 and a low overpotential of -375 mV [1, 5]. However, poor OER electrocatalytic activity of MnOx-based oxides in alkaline media diminish the hope of finding an exclusive bi-functional catalyst for both ORR and OER [1].

Our research is aimed at the development of highly active MnO2-based catalysts for both ORR and OER with long cycle life by adding non-precious metal compounds as co-catalysts and intercalating potassium ions into the catalyst layer. The mechanisms for OER and ORR of the mixed catalysts and the role of K+are investigated by a combination of surface characterization methods and electrochemical techniques.

In the present work, LaCoO3 were synthesized via co-precipitation methods. MnO2-based Gas diffusion electrodes (GDE) were then prepared using the method described elsewhere [1]. In order to intercalate the potassium ions into the catalyst layer, a simple yet effective method has been used. The GDEs were kept in in 6M KOH solution at open cicuit potential while rotating the sample at 400 RPM for 6 days at 313 K.

Cyclic voltammetry tests were performed in O2 saturated 6 M KOH at 293 K to investigate the electrocatalytic activity of the MnO2-LaCoO3 catalyst for both OER and ORR. The longer-term durability of the electrodes was also investigated by performing 100 repeated OER-ORR voltammetric cycles. Electron energy loss spectroscopy (EELS) has been also used to further analyze the catalyst layer and study the Mn valance changes during both OER and ORR. X-ray photoelectron spectroscopy (XPS) was also used to confirm the existence of intercalated K+ions in the catalyst layer.

Interestingly, huge enhancement is observed in the OER/ORR performance of the activated catalyst comparing to the fresh electrodes without any K+ activation. Fig 1-a and 1-b show the OER and ORR voltammograms, respectively, of the fresh and activated MnO2-LaCoO3 GDEs as well as fresh MnO2 electrodes.  The OER overpotential for MnO2-LaCoO3 decreases to 193 from 367 mV after intercalating potassium ions in the catalyst layer (Fig. 1-a). In the ORR region, activated MnO2-LaCoO3 electrodes still provides the lowest ORR overpotential of -321 mV (Fig. 1-b), which is far better than the ORR behavior reported in the literature for Core-Corena Bifunctional Catalyst (CCBC), needle-like MnOx thin film,  CoMn2O4 and even nanostructured Mn oxide thin film [1].

Moreover, the activated catalyst performs almost without any degradation in OER region while suffering up to 61% decrease in the ORR current density at -250 mV (vs MOE) after 100 cycles of severe durability tests. Our results indicate that even 12 hrs of activation in 6 M KOH could enhance the electrocatalytic activity of the degraded catalyst after severe cycling to some point, mentioned before as “healing effect” [1].  The EELS analysis reveals that the Mn valance decreases during severe cycling from about 4 to 2.7 for the cycle No. 1 and 100, respectively. This confirms that the loss in the ORR electrocatalytic activity of the activated sample after 100 cycles is associated with the transformation of MnO2 to Mn3O4during severe cycling. 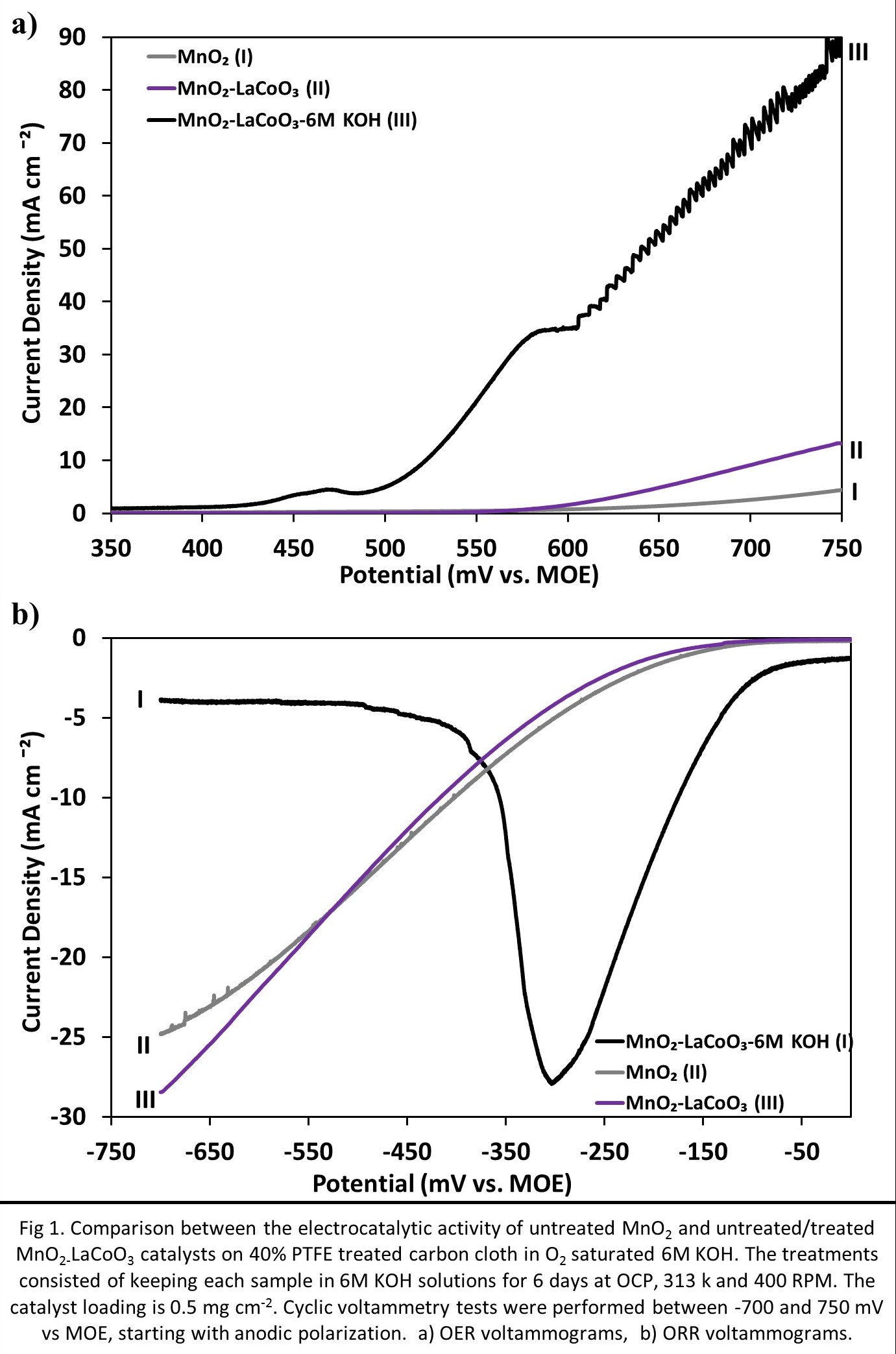