Lithium Polymer Battery (LPB), a solid-state battery, is the preferred configuration for SEM in-situ experiment.  We present in Figure 1 micrographs taken during in-situ experiments of a Li/PEO-based solid polymer electrolyte (SPE)/Li1.2V3O8 LPB showing the variation in thickness for the Li, SPE and cathode layers with the cell voltage. Only the Li thickness shows an important variation during cycling. The Li plating rate can also be measured. This experiment can clearly be used to better understand the Li plating mechanism.

In figure 2 we present micrographs taken during an in-situ SEM cycling of a Li/PEO-based SPE/SiO cell using backscattered electron signal.  We clearly see an important decrease in the beam intensity of the back-scattered electrons (BSE) as a function of the cell voltage as a result of the Si phase transformation upon cycling (upon Li ‘insertion’, the BSE intensity is lower and the particle becomes darker).  We also note that a region of the big particle remains white (i.e. the Li+ ions did not have sufficient time to ‘diffuse’ inside their core region).  This result explains the rather low capacity observed with such particles, and it gives evidence that the system is out of thermodynamic equilibrium.  This in-situ experiment also shows no cracking of the relatively big SiO particles since the voltage was kept higher than 0.1V (stop at the Li22Si7 phase instead of Li22Si5) when compared to previous results [1].  We will also present in-situ SEM of nano-Si particles that did not suffer any cracking, but agglomerate (electrochemical sintering), which results in a more rigid and fractured electrodes [2]

This presentation will also use in-situ SEM to obtain a better understanding of the failure mechanism of new electrode materials, including Li-S. 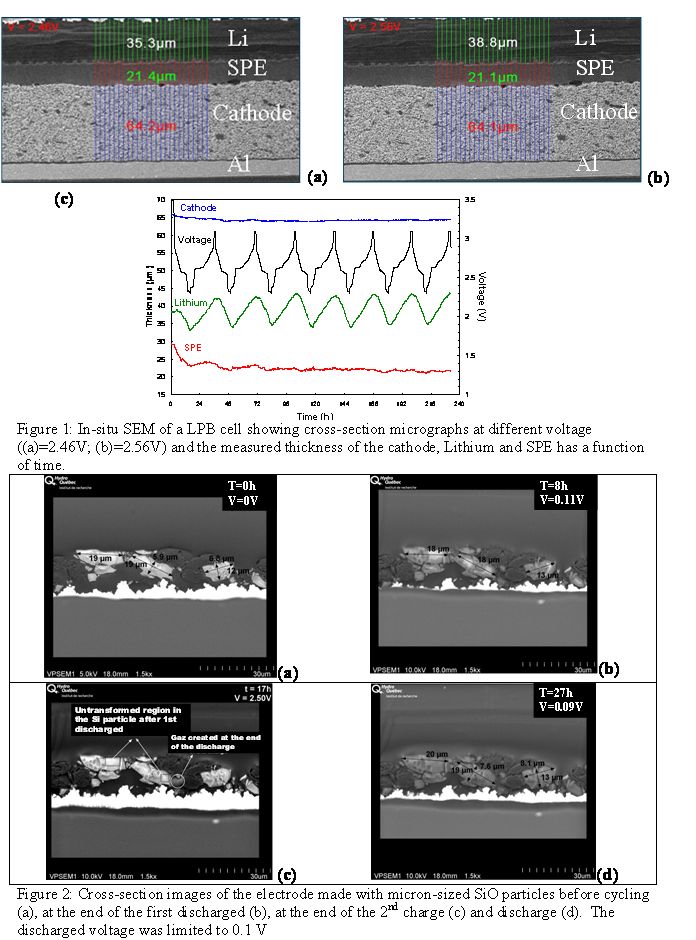